Is it normal, that personnels icons are not shown on myopenHAB?
I’m using for openhab2 my Raspberry latest version and icons are in openHAB2-conf/icons.

Display on my IPhone IOS 10.

Thanks in adance for any help.
Best regards

Edit: ahh, now I got it: I guess you mean while logging in to https://home.myopenhab.org
Yes, personnel icons are present, but it takes a while until you can see them (in my case it took almost 20 seconds until they were available) 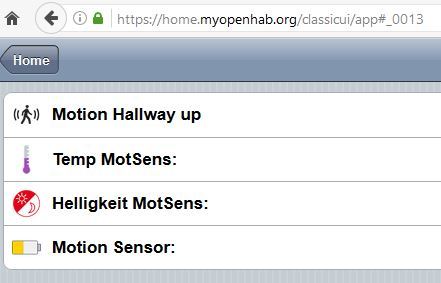 On my navigator, I don’t have a problem

But on my IPhone icons are missing 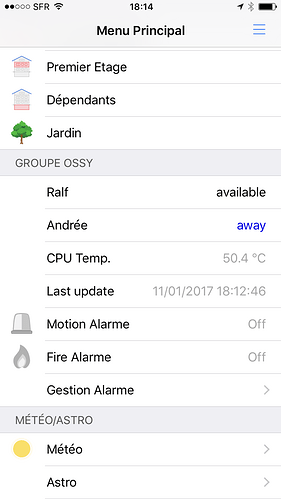 Okay, not of any help here, I’m Android user

But on my IPhone icons are missing

Here are some hints to get it going:

This seems to be a little mystical, some got it going, others not. Aren't they displayed at all or is it only the dynamic part which isn't working? For me it's working and here are some tipps (all are related to OH2 installations. I have also used custom icons in my old OH1 days, but I couldn't remember what I've done there to get them going…

): Some people have said that the ios app only supports png icons (not svg). I haven't checked this but I am using png and they do wor…

I’ve recently seen some traffic talking about support for svg in the phone apps. Are you using svg or png icons?

I should have told it sorry.
I’m using svg icons

AFAIK svg icons are not supported on the iOS app (at the moment). See also here:

I have been trying to get this to work also. It is more complex than it seems. This is what I have found. @mohsh86 is correct. The icons map to the transformed value, not the underlying state of the item. I am transforming the label of my item, so that OPEN/CLOSED becomes OnLine/OfflLine. I have to create a network icon called network-online.png and one called network-offline.png. Using the iOS app, I have found that this only uses png icons, not svg icons. These icons go in /conf/icons/classi…

I’ll try it later. I had already a lot of work finding my svg icons