how do you enable and disable rules from within a rule ?

I’m not sure what you mean by disabling rules from within a rule?

Of course you can use an if…then statement to ignore a chunk of a rule if a condition is met.
Is that what you meant or something else? 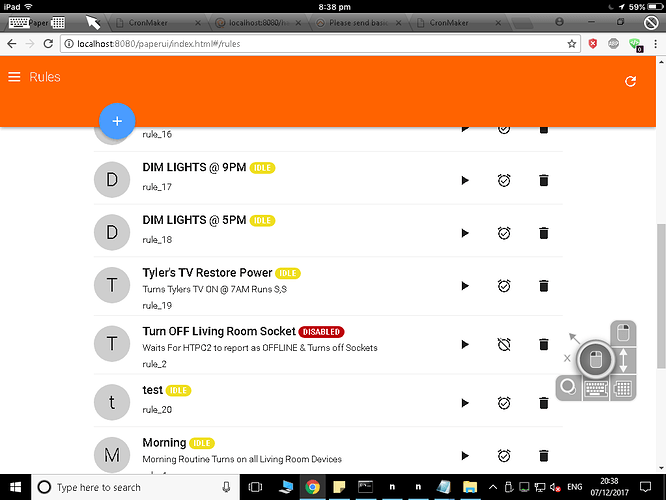 If you run RULE 1 it shuts down a computer once that’s done it enables RULE 2 , RULE 2 then runs and disables itself when finished running

I can’t help you there. All my rules are text based in .rules files. I haven’t used the paperUI rules engine.

I’m sure someone else can help though.

realised you were the person who already replyed

A text-based rule would be easier for other people on this forum to help debug. Better for you for a learning point of view too.

I’m basically only a beginner too but it’s all a little clearer than when I started out!

I HAVE CREATED MY FIRST TEXT RULE IT WAS SET TO RUN WITH CRON TIME TO ONLY TURN A LIGHT OFF BUT IT WORKED THANK YOU VERY MUCH ON THAT.

How long have you been running openhab? & how big is your setup?

do you think you could help me with a real rule it could replace 6 rules of mine if you could?

what im after is a single rule that

Not sure how big my setup is compared with others. I control everything from, lights, shutters and security to Christmas tree lights and a controller for a a snake terrarium (heater, lights, humidity, feeding times etc).
. I started about a year ago with openHAB1. |t’s come a long way since then.

With regard to your rules, why not have a go at writing them yourself and if they don’t work, post them up here and I’m sure some of the people here would be more than happy to help.

They’ve helped me a lot.

i would add them on top of each other and save them as light dimming schedual.rule

do you just put a space and the next rule below

Thanks for your help Saracen i will update my progress here

We know. You have proven this in your other posts. That is why I’m happy to help.

Look at some of the Design Pattern postings which have lots of explanations. There are some simple example rules at the bottom of the Rules doc Opus posted.

The demo setup also comes with some working rules. Sadly, I’m not entirely certain how to install the Demo setup after you are up and running. You can choose Demo from the list of packages when you first start up a fresh OH install.

I agree that a list of simple sample rules would help a lot of beginners.

I’ll open an issue on the docs to indude some super simple examples in the Beginner’s Tutorial.

This is not supported in the Rules DSL. That is a new feature of the Experimental Rules Engine.

do you just put a space and the next rule below

Yes, that is how you do it.

I have made a lot of posts and alot of them simple,
I just hope I’m not annoying everyone with my simple questions. I do think I’m learning slowly tho

And as for the beginner code in the docs it would be extremely helpful it’s impossible to understand big blocks of code even if it is simple.
I have looked through alot of the docs but it is deffinitly scary and overwhelming for beginners (I would help myself but I don’t know enough to help)

I have managed to get two rules in one file it worked I’m just having problems at the moment with a single rule.
I have created a new post to leave this open for more simple examples

In rules you have to use .state to reference to the state. So your rule should be more like this: rule “Test Dim Rule” when Time cron “0 10 22 * * ?” //year is optional then if((Lamp1_Brightness.state as Number) > 50) { //cast the state as number Lamp1_Brightness.sendCommand(50) //whenever possible prefer the method over the action } end See One rule fires but not the other, why in question of .state and http://docs.openhab.org/configuration/r…

I have made a lot of posts and alot of them simple I just hope I’m not annoying anyone with my simple questions. I do think I’m learning slowly tho

We only get annoyed when you show no interest in trying to learn or make it work yourself. You have proven to be willing to do the work so we are more than happy to help as much as we can.

I might recommend going through one of the open courseware type programming courses. MIT offers a good beginner’s one based around Python. It is free and it might give you more confidence in tackling the coding aspects of Rules.

Even though the language is different, it will teach a lot of concepts that carry over to all programming languages which you will need even in humble old OH Rules.

I’m more than happy to learn about systems in my house I hate running things I don’t understand if you don’t once something goes wrong its impossible to fix or even maintain.

I might have alook at that course you linked

I pick stuff up pretty quick I think I can manage the the simple code rules by just getting a few up and running and copy and paste my own code and edit from there. (I have set the log to continuous picking up alot from the watching commands and items change)

Probably not the more complex coding (I hear of trained programmers struggling to learn openhab :o)

(I hear of trained programmers struggling to learn openhab :o)

Their problem tends to be more caused by the fact that the language Rules are written are simplified in ways that take away features they are used to using. It forces them to think about how to code their rules differently from what they are used to and many are incapable or unwilling to do so. Luckily we have a way for them to code using one of several traditional languages.

This rule waits for an event (opening a door in this example) and then stores that time in another item. It will also send an email if you have setup email in yr openhab:

Why you don‘t read all Examples ? Here is enough Stuff to learn…

Another rule (if some people are interested to calculate some values out of multiple sensors) - Using configuration files.

To calculate the real energy consumption of my house, I have to add the solar panels to my consumption.

First I have added an item (in energymeter.items)

Then I’ve added a rule

(Nice job OpenHab2’s team! It’s hard to find the way to do things, but it’s limitless