Problem on Win10 after openHAB 2.1 installation with Java runtime

I did installation on Microsoft Windows 10 Pro Version 10.0.15063 Build 15063 according to http://docs.openhab.org/installation/windows.html. First I had JRE 32bit only. During start of openHAB2.1 I got the problem described below.
After reading several Q&A I additionally installed JDK 64bit and set JAVA_HOME = C:\Progra~1\Java\jdk1.8.0_131. With admin rights I position the command prompt to C:\openHAB2 and execute start.bat or start_debug.bat. Result is …
C:\openHAB2>start_debug.bat
Launching the openHAB runtime…
+++ BEGIN karaf.bat
karaf.bat: Ignoring predefined value for KARAF_HOME
+++ Check_JAVA_END
+++ JAVA_START C:\Progra~1\Java\jdk1.8.0_131
Listening for transport dt_socket at address: 5005
–> ^C pressed
Batchvorgang abbrechen (J/N)? ^C
+++ JAVA_RUNNING karaf.bat
+++ NEAR END karaf.bat
+++ END karaf.bat
Here batch is not executed anymore (waiting around 5 minutes) and a break by ^C is the only possibility to get some reaction. The lines beginning with “+++” are debug-echos I added to the karaf.bat file.

Because it looks like something goes wrong with Java start, I installed “MediathekView” as an other Java application - it works fine with no probems and uses the parallel installed JRE 32bit (says info in the app itself).

I’m wondering a little bit why this openHAB installation look so “critical” (own dir C:\openHAB2, manual set of variable, use of bad controllable batch files, etc.). No fingerpoint, but MediathekView can be started on network drives with long path names including blanks by running a small 59kB exe file.

Anyone out there with any idea? Thanks in advance!

P.S.: Setting “@echo on” in karaf.bat the command console shows these last lines before “freezing”: 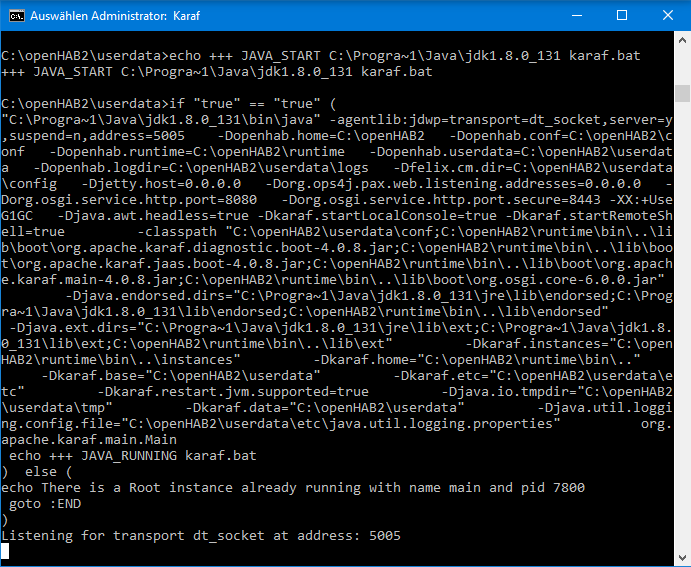 I’m wondering a little bit why this openHAB installation look so “critical” (own dir C:\openHAB2, manual set of variable, use of bad controllable batch files, etc.). No fingerpoint, but MediathekView can be started on network drives with long path names including blanks by running a small 59kB exe file.

I can’t answer your specific problem but I can answer this question. OH, compared to what I can tell from screenshots of MediathekView, is probably 100x more complex with 100x more lines of code if not more. Furthermore, while many users run OH happily on Windows, I would bet that the majority of OH users are running OH on some flavor of Linux and therefore Linux gets more attention than Windows. Certainly, automated installation and update/upgrade is only supported on Linux.

Sorry that I opened maybe two different discussions on one topic. Here the solution of my problem and a comment to the installation:

After producing a virgin local “C:\openhab2” I can state additionally:

Resumee: I dont’t want to hide my mistake but a check for the initialised dirs are moved to a new location (can happen by backup and restore not in the same dir) would help.

I’m on Win 10 64bit as well with 32bit and 64bit JRE installed and its working for me.
I have System variable (not user variable) set as JAVA_HOME=C:\Program Files\Java\jre1.8.0_144
I’m running the start.bat or start_debug.bat.in a non-admin command prompt.

Are you getting any errors in “C:\oopenHAB2\userdata\logs\openhab.log”?

Rob, answer regarding your question: I get no errors, only warnings and infos.