I created a soft link from /var/www/html/ to the place where the visu_config.xml is located.
The Apache shows the CometVisu visualization but all items are left empty.
With Jetty except the PHP elements everything works fine.

Someone an idea what I made wrong?

I don’t use ConetVisu but I’m pretty sure there is a PHP add-on listed in PaperUI for it. You may have to enable experimental bindings fur it to show up.

I’ve no idea what may be wrong with Apache but the above may work better for you.

EDIT: Indeed, I remembered correctly. Its there: 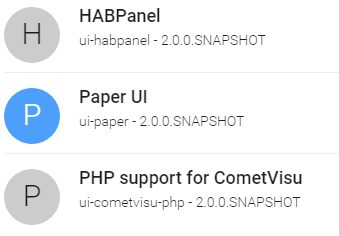 I used the openHAB 2.0 beta3 (online) and wasn’t able to get the ui-cometvisu-php binding installed. A switch to the snapshot version last week solved this problem.
The first tries of running PHP sripts are looking very promising.