Hi
Could anyone recommend a UPS hardware solution for the Raspberry 3 with the Razpberry Z-wave HAT installed. One USB port is in use for RFXCom but the rest are free. I run most of the house electrics including the AirSource Heatpump on it so I’m super keen that it only ever shuts down and reboots in a controlled fashion.
Thanks
Tim

Where are you located?
Here in the US I prefer the APC brand of UPS devices. I had one on my Pi with their Linux software and USB cable. I never really tested it out though before moving OH to a VM on a server.

That’s a question a different forum probably is a better place for.
Just a hint: don’t put the RPi ONLY on UPS but all devices of importance (Inet router, Phone, NAS etc).
So an apparently simple choice like a piggyback Pi hat is not a good idea.
I also use an APC model. They’re cheap and reliable and include surge protection, too.
Dislike though most are still lead based.

I’ll look at the APC models. I’m in England but hopefully they will have a European voltage version.

hopefully they will have a European voltage version

I would hope so. Markus is in Germany, I believe.

APC InfraStruxure APC InfraStruxure™ is the scalable and adaptable datacentre architecture that dramatically reduces time and complexity from design to delivery. APC provides a number of cutting edge solutions to… read more →

Will you need a new one after brex*t ?
SCNR

They have for Germany and the Netherlands: https://www.apc.com/shop/nl/en/products/APC-Back-UPS-400-230V-German-Dutch/P-BE400-GR

So I suppose also for the UK

After Brexit I might live in Germany with my German wife !
Thanks for all the advice. I’ll get on it when I get home from Berlin.

Get a l APC ups from amazon (other retailers exist too)
Get one which has USB so you can install nut on it. When the ups is running low, nut can gracefully shutdown your pi.
https://www.amazon.co.uk/APC-Back-UPS-BX-Uninterruptible-Shutdown/dp/B00T7BYV6W/
The non-USB one is half the price but really, you’re only delaying the inevitable unclean shutdown with that.

Actually I liked the apcupsd? software better than nut.

nut is a lot more complex, would be nice to have a simple solution, but on the other hand, there is a full-featured NUTv2 Binding in openHAB 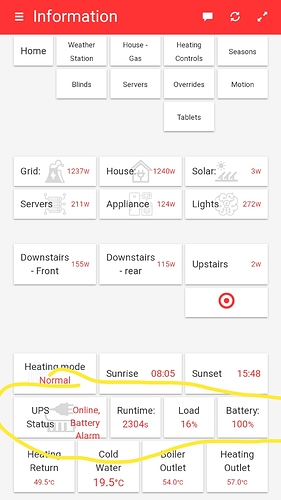