Hi guys, I had OH2 and now OH3 semi manually installed on my Synology DS215j.

I want to acquire new hardware for OH3.

Should I invest money to use the docker repo on a new Synology or better use a raspberry Pi 4?

I’m a bit concerned about the negative posts recently about broken OH repos. I woul.d like to stick to openHAB.

OH3 will work fine on an rPi 4. If you find one available let me know…!

I’m a bit concerned about the negative posts recently about broken OH repos.

This only affects you if you’re upgrading, and your last upgrade was more than 6 (?) months ago. If you’re starting fresh you shouldn’t have this issue.

I’d say it depends on whether you have external USB devices or not. If so I think you’ll need to spin up a VM on the Synology since DSM 7 dropped support for most USB devices. For this reason and for long term expansion and growth I’d recommend hosting OH somewhere else than the Synology. Availability of SBCs right now though isn’t great so ability to acquire that “something else” might make the decision for you.

The original announcement was May 2021 so that’s pretty close, 8 months.

OK, there is just a Raspberry PI 4 system with 2GB at welectron dot com and so I decided to reinstall the 3.2 version on my good old Synology without docker as long as the performance is acceptable. Thank you all for your replies.

2GB is absolutely sufficient and a 2GB RPI4 is exactly what’s officially recommended here.
Clearly the better choice than to go with a Synology based install.

I run OH3 on a dedicated Ubuntu server that I built using an Asrock j4105-itx motherboard. It has a quad core Celeron 4105 cpu and uses about 14W of power. It is rock solid. I really like the Intel Celeron based motherboards for applications like OH3. They are quiet, relatively energy efficient and most importantly …reliable. You also avoid software challenges that you find sometimes when using Arm based boards. Unfortunately these types of motherboards are hard to find now. This is a more expensive option than going the raspberry pi route but you may want to consider if you can find one.

They are quiet, relatively energy efficient and most importantly …reliable.

I’m not sure if you meant this as a shot at RPis, or just an expression of confidence in your platform of choice. Maybe both?

Whatever the case, I’ll just note that I’ve had one SD card fail on me with an RPi, and it was an old card I used when I was just getting started with OH (and before ZRAM was implemented).

This isn’t a criticism of what you’re doing, as it sounds like it works great. For anyone who comes along and reads this later, there are two things you need to do to have a reliable RPi system:

Note that this isn’t specific to OH–it’s a good practice for any RPi that you need to always be available. I’d also recommend it for a Pi-Hole server.

I’m not sure if you meant this as a shot at RPis, or just an expression of confidence in your platform of choice. Maybe both?

Re-reading my post, I guess you could read it as a shot at RPIs but this was not my intent. I was suggesting an aternative that I have found that works very well. I have a house full of RPIs - I think at least one of every generation so I don’t have anything against using an RPI. Thanks for pointing this out.

For anyone who comes along and reads this later, there are two things you need to do to have a reliable RPi system:

Thanks for pointing this out.

You bet. I try to not make assumptions–particularly ones that will lead to big debates. It was just vague enough that I really couldn’t tell either way.

I’m convinced that what users ultimately and primarily want is reliability, and that’s way less depending on hardware selection than what most people think.
Ultimately it really is way more about software than it is about hardware.
It’s like Russ said, it’s about proper operations to have stuff like regular backups (and some more).
I would add that this should be automated else you will forget about some day soon, and humbly
propose to use openHABian with its bundled software solutions for this purpose.
Even the hardware issues with SD cards (not specific to RPis by the way) you can mitigate in software.
Software, too, is the reason not to run on a NAS. There have been various issues with the OH build on Synology.
Trading off, the efforts users need to spend on getting that to work (if reliably at all) will never reach nowhere the quickness and simplicity of flashing an image to RPi that just works afterwards.
And if reliability is what you’re after, with any attempt at a home-grown solution, work and problems just begin there.
If you know how to and like to take on these challenges for fun or whatever other reason that’s absolutely fine.
Most users however don’t want to waste any of their time on the server part rather than openHAB so that’s why the recommendation is what it is, see link.

This is a good discussion and question. For what it is worth, I will share my experience over the past 4+ years.

I have experienced twice SD card failures about each 11-13 months. (I maybe had some excessive logging and influx db writes which contributed to this)… I then learned to start taking better backups, and keeping a cloned card…
…
Then I upgraded to a solid state hard drive and having it boot via usb.( Still on the rpi3b+)

About 2 years ago, I bought a raspberry pi4 4gb… But guess what? I’m still running it on the rpi3b because it’s Rock solid and not giving me any reason to switch it yet (and I haven’t got around to it).

I added a ups backup recently.

Another benefit of the raspberry Pi is the GPIO interface… I am using it to control a 8 channel relay board which does things like open the garage doors, enable/disable doorbell, garden lights on/off, sprinklers on…

So I’m a strong supporter of a raspberry Pi and openHABian.

Note: I also use the rpi to run pihole DNS blocker, Mqtt broker and a couple other services… (Close to full ram 1gb usage and need the occasional reboots when for example samba server isn’t responsive.

A big thank you to all involved… I’m very pleased with it.

To put my 2 cents after 5+ years of practice and couple of commercial installs that I maintain over that time I still would go for the VM solution for a new install. Piece of mind of having an up to date full VM backup is just priceless. I currently run my home OH on the QNAP with 6 core Ryzen 1700, but only because I use it for home lab main RAID6 storage. For comercial users I run a proxmox VM server on some low power supermicro server. Both solution are prohibitively expensive @ around 2000Euro but do the job fairly well.

On the more resonable side (price wise) I can recomend this platform: 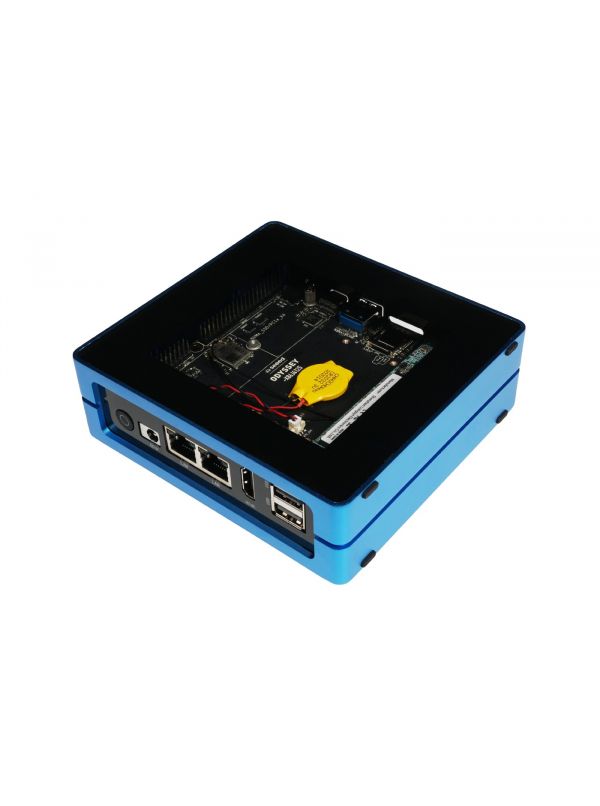 Odyssey Blue J4125 allows you to simply build Edge Computing applications with powerful CPU and rich communication interfaces. The Odyssey Blue J4125, based on Intel Celeron J4125, is a Quad-Core 2.0GHz CPU that bursts up to 2.7GHz. There is...

@ 250 Euro while they are certainly a bit more expensive then RPI4 they are about 5x faster and very easy to work with. They can do both SATA SSD or PCIe SSD for fast storage. A single system with Proxmox can do 2 VM’s for both OH and InfluxDB and the m.2 SSD is way more durable then any SD cards. ( had 4 SD failures on my RPI install along those years)