In openhab 2.x I had a rule to dim the lights when I press PLAY or PAUSE in kodi.
something like this:

I try to recreate this rule in openhab 3, but using 100% Main-UI 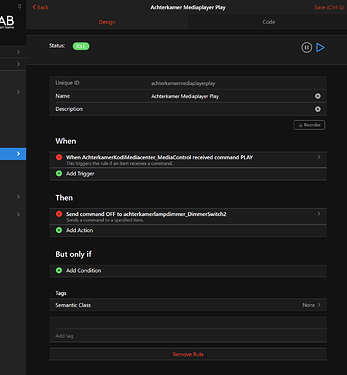 The rule via Main-UI does not work. I don’t know why yet. I tried to recreate the rule in a rule file, see the code at the top of this post but it gives an error

oh yes I forgot to tell you that the Kodi binding works.
I can operate Kodi via the Items control and see PLAY and PAUSE appear in capital letters in the GUI.

I tried to recreate the rule in a rule file, see the code at the top of this post but it gives an error

The error is just pointing out that, based on the text you posted above, you don’t have the required end following the rule. It should be:

As for the UI based rule, what you have shown here is not equivalent to what you have in your text rule. The triggers are different. You text rule trigger is:

Which will cause the rule to run every time the item state is changed whether that change occurs through some external control that OH knows nothing about or some internal command that OH sends itself. The UI trigger

Does not respond to arbitrary changes of the item’s state, but instead only responds when when some part of OH (a ui widget or another rule) sends a command via the binding to the device. This can occur whether the item changes state or not it is simply a recognition that OH has asked the item to do something. So if you have this rule set to ‘received command’ and you start playing Kodi through some other remote or button push on the kodi device, this rule will not trigger. When setting up the trigger with the UI you want to select the changed radio button:

and then it will match your .rules file rule.

Just to chime in some additional info.

I changed the rule from “core.ItemCommandTrigger” to “changed” and it works perfectly.

question about the * .rules file.

Thanks for any explanation

Thank you for explaining and adding to what Justin wrote.

If I choose Scripts> Rule DSL in openhab, can I work in the same way as I did in openhab 2.5.x in * .rules files?

Can I then use Switch / CASE statment and define Variable and Constands and convert to lower case?

If I choose Scripts> Rule DSL in openhab, can I work in the same way as I did in openhab 2.5.x in * .rules files?

Yes with the following changes (beyond the breaking changes introduced by OH 3 like ZonedDateTime):

question about the * .rules file.

The } is not the end of the rule it is just closing the switch statement. But yes, you do always need the end; it’s a part of the complete rules syntax. I don’t know the full technical details, but presumably it’s simply about defining for the rules parser which section of the file to run through the xtend engine.

Beyond that JustinG is exactly right. The end is required as part of the syntax in .rules files.

Thanks,
I have been scripting in power shell the last jear and I have difficulty keeping syntax apart if I switch between languages.