Hi!
Having fought with the issue for a day I thought I would share my findings with the community:

I am currently installing OH2 on an old MacMini (Intel Solo) that I have had lying around for a while.
I started by downloading Ubuntu 16.04.5 LTS and then installing OH2, influx and Grafana, supported by the excellent installation guides provided. Thank you guys!

Things went fairly well with a bit of head-scratching but I hit a real stumbling block when trying to boot the Mac headless and only access via ssh. The Mac just would not boot without a monitor connected. I started blaming GRUB and messing around with the settings there for half a day but with no success.

Then - Google is your friend - I stumbled across the solution, which does not involve Ubuntu at all: The MacMini checks at startup if a monitor is connected. If not, it simply does not boot anything! So, what to do? Get a monitor which never will be used?

The solution was simple. I had a DVI to VGA adapter that I used before with the Mac. Simply connect a 100 ohm resistor from pin 2 to pin 7 on the VGA-side. This tricks the Mac to believe that there is really a monitor connected and it boots happily.

Thanks Gunnar for the heads-up. Got an 2010 Mac mini yesterday and I am planning to replace the Raspberry-USB hard drive construction by the Mac mini due to the better WAF (placed in the living room).

How were your experiences with the infrastructure the last months? Any further issues with the Hardware (Wifi etc.) in ubuntu?

Hi cyberkeiler!
Sorry to disappoint you but I had to give up on the MacMini. The reason was that this old box only had an Intel Solo processor, 32-bit. So it could only run Ubuntu 14. So far, so good and I got OH 2.3 running and also influx db.

What really killed the idea was that there is no 32-bit version of Grafana available. The only release was a very old one with lots of bugs. As I am very fond of my Grafana graphs, this was then a dead-end.

I gave in and bought a small NUC-copy from China on GearBest. An ACEPC AK1 with an Intel Celeron processor, 32 GB of SSD and 4 GB of RAM. It comes with an adapter for an HDD so I took the 120 GB SSD from the MacMini and put that in there. The AK1 comes with Windows 10 pre-installed but it was no big effort to boot Ubuntu 18 from an USB CD-reader and install Ubuntu on the 120 GB. The BIOS supports dual boot so now I boot directly into Linux but the Win10 is there, should I need it. Heaps of USB ports, HDMI graphics. Wifi and Ethernet. Runs headless without extra HW. I ssh into it.

The box runs cool. Processor load is seldom above 1% and even if there is a CPU-fan installed I do not think it ever runs. It is dead quiet.

As for WAF, I would say that it would be highly acceptable! Sleek black box, smaller than the MacMini. 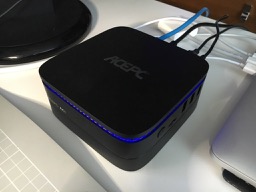 and with a blue “comfort light” from the cooling fins.

Just one thing to add: Price: Less than 200€ with express freight from their warehouse in Spain. Now they probably have new, even better models. Make sure it is a 64-bit architecture. But then I guess almost everything these days is.

I have had one issue with it: The blue LEDs gave in after two weeks. Don’t know why. It was not so hard to take the top off and solder new ones in place. It turned out they were actually red-blue LEDs, common anode. Very hard to find in Europe so I got a bunch from China. But I don’t know what the red part is used for. Overheating alarm?? So I guess just blue LEDs would have done OK. I would not give up on the blue “comfort light”. It makes the visual appearance perfect!