Never quit, never give up!

thats not my personality

i dont get it

- thats my command line, that works

Try saving the items file again and watch the log. If there’s an error, it won’t load it and it will log the error. If it saves without error, then all I can think of is to restart OH.

if it saves without error, then all I can think of is to restart OH.

no error - no luck after restart

Does the script execute if you just run /etc/openhab2/scripts/iTunes.sh?

it seems that i need a password again - wtf ? 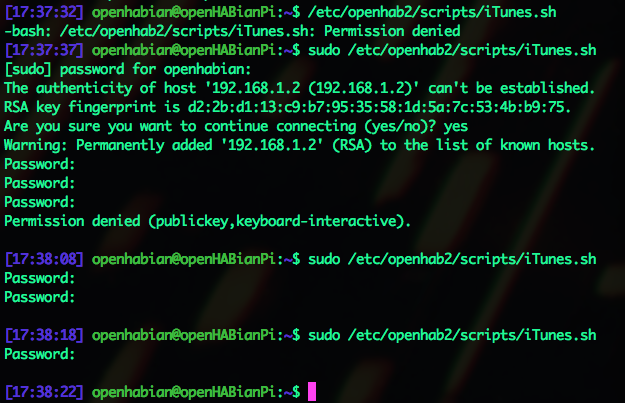 One of the most common problems I help people with on this forum is dealing with the Exec binding. So I’m writing this post so I can reference it later. Background When openHAB is installed in the automated way (i.e. via apt-get) an openhab user is created and the service runs under that user. The openhab user has the following attributes: no shell so one cannot log in or su to this user limited rights not a member of sudoers has a home directory in /var/lib/openhab (or /var/lib/openhab2) has…

Based on this, openhab is the user that is running OH and will be running the script.

i tried another way, i created a new iTunes2.sh file and it looks like this now:

When i try this script i get a “Permission denied”
( i already made i executable “sudo chmod u+x iTunes2.sh” )

Check out the posts I linked. Your OH is running under the openhab account. That is the account that needs the permissions to run the script, or whatever else you want the Exec binding to execute.

you are probably right, and i understand that i need to change the user but i dont know how to do so

thanks for all your ideas, links and help so far! learned a lot out of it so far

i think you didnt read the whole thread

this is still working but my exec-binding is not

In question of file permissions: the simple way would be to

to allow editing only for user openhab, but reading and execution for all users. Later, when all things work the right way, you can change the permissions to a more safe configuration.

both looks the same:

i tried your file permissions, but still no luck

What’s the output of

i tried this - but whats the default password for the “openhab” user ?

So now the problem is reduced to the login via ssh

User username is secured via password. There is no (good) way to use password for scripted ssh. Instead you should use private keys to login. The steps for this:

Instead you should use private keys to login.

i tried “su openhab” but i dont know the default password !?
i found an interesting thread:

There is no relation between private key and user account, in fact, you could use whatever private/public key pair you want to use:

Altough there might be a username within the key file, it isn’t part of authentication process.

sorry for being confused with the exec-binding…