Or do I need another hub running ?

You may be confused with the UniqueID of the hub/bridge which you have set as 4666 in the example above. There is no need to convert the remote ID into decimal and set the hub as that number. Please see the examples in the readme, you can put multiple remotes under the same HUB/BRIDGE and it can be any number 4666 or any other it does not matter…

If you are wanting to control the same globe with 2 different remotes and have the same controls in Openhab update, then this can be done in 1 of 2 ways…

Brilliant, thanks Matt, I knew you’d have an idea.

Will try the 2nd method and cross my fingers.

But also came up with a 3rd option that works.
Things:

item: (separate both instances with a comma)

Thanks again for the guidance Matt.

Glad it helped and I really like your option 3 more then the bridge idea, as in the future it will be easier to find and understand plus backups may capture it more completely if your broker is located on another machine. Thanks for posting it…

A tip I found was not to define a group 0 Thing. Instead I used the Openhab group concept, the examples in the readme has an example of doing this. The reasons for doing it that way off the top of my head were:

This is why PaperUI and a search will not auto find the group 0 entries.

Hi Matt, using group 0 is a leftover from the original Milight Hub which only was retired a week ago. It still works to turn all lights on/off so is handy, but beyond that it does nothing, as you mention, the state tracking for it is not very good.

I have a non-operational Google Home Mini, but I don’t use it, doesn’t like my wifi’s 64char passwords, and I have way too many devices setup to go changing that, so it sits in it’s box in the cupboard.

As a matter of interest here’s a screencap of my AllLights group: 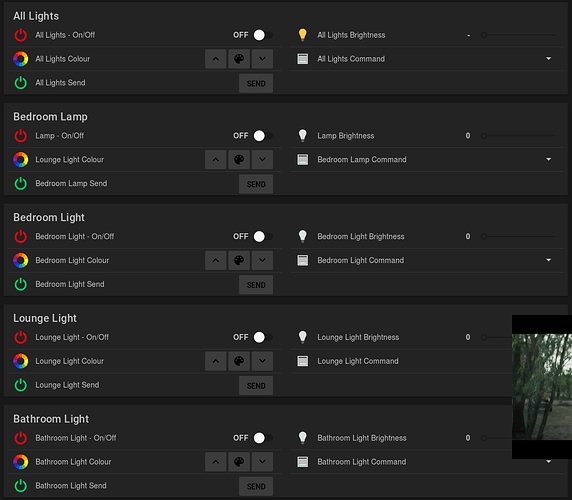 EDIT: just noticed my tv app was overlaid in the bottom right, just ignore that, LOL.
EDIT2: all my editing is done by editing the config files under /etc/openhab2/*, don’t use paperui except sometimes to see if something is active or not, but no config is done there. BTW: I’m running the Bintray debian apt package repo (2.4.0-1) on a Linux Mint PC.