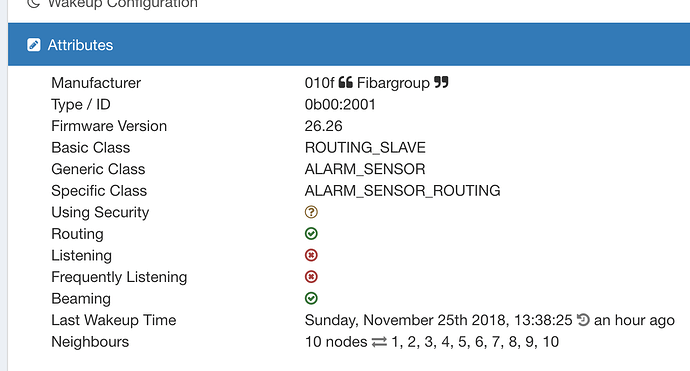 The “Channels” section is missing. Can anyone help me figure out how to fix this situation? How can I get the “Channels” to appear in the newer configuration.

Here is some additional information about my configurations. The two flood sensors appear to have the same firmware version (26.26, as shown above). Likewise, the “Type/ID” for both are the same (as shown above).
Both OpenHAB systems are running on Raspberry PIs (the older is on a RPi 2 and the newer on a RPi 3). The older installation was performed manually but the newer system is based on the OpenHABian disk image (a very nice addition). However, they are both running the same version of OpenHAB (2.3.0-1)

Thank you for your assistance.

The “Channels” section is missing. Can anyone help me figure out how to fix this situation? How can I get the “Channels” to appear in the newer configuration.

Thank you for your quick response. Yes, that was one of the steps I performed on the new installation. When I originally added the device to the Z Wave controller (a Aeon Labs Z-Stick Gen5), OpenHAB showed the Fibaro flood sensor as an unknown device. I manually woke up the flood sensor several times (by pressing a button inside the device) and then OpenHAB properly identified the device. But, unfortunately the “Channels” section is missing (in both HABmin and PaperUI). Any other suggestions? Thank you, again.

hmm… if it’s not too much trouble: exclude it, re-include it, discover it (PaperUI), wake it up again
remove the existing Thing from openHAB and re-add it after inclusion

I won’t be near the new installation for a couple of weeks, so I won’t be able to try to add it back to the Z Wave network until then. I’ll give it a try and reply to this thread with the results. Thanks, again.

I was able to get it working over the past day. For the benefit of anyone who might run into a similar issue, here is what I did. As Angelos suggested, I first removed it from my OpenHAB and Z-Wave configuration. Using HABmin, I removed the “thing” from my OpenHAB instance. Then I removed it from my Z-Wave hub. For good measure, I restarted OpenHAB and indeed the item was gone. Then I added the flood detector back to my Z-Wave hub (through the inclusion process) and woke the device up several times (since it’s battery operated and may not have had time to send all its config info). Then, I added the thing back to OpenHAB. It saw the thing with the appropriate information – including the channels. I associated some items with the channels and … nothing. The items didn’t show any info (e.g., temperature, battery level, etc.). I tried waking the device up several more times over a half hour period. Still nothing. Frustrated, I went to bed and planned on looking at it in the morning.

This morning, I saw an item that had been discovered by OpenHAB in the Inbox. Turns out that it was the flood detector with a new node ID. The original node ID was 13 (the one assigned when I added it to Z-Wave the very first time). The node ID assigned to it last night was 13, too. I was wondering about that at the time, but I assumed that Z-Wave was just reusing the same node ID since I had removed the device that had originally been assigned to that ID.

So this morning, I removed the thing from OpenHAB – the flood detector with Z-Wave node ID 13. Then I added the new thing from the Inbox – the flood detector with Z-Wave node ID 14. Again, it showed up with all of the configuration screens including the channels. I assigned items to the channels and watched the OpenHAB log files. Nothing appeared for about half an hour and then I saw the temperature appear. Another 10-15 minutes later the battery level appeared.

It looks like everything is working now. Thank you again for your help.