You may think this topic is an already existing one, and true the subject of it is very similar to many of other topic published in the forum but my case is not akin to others.

I’m trying to integrate to myopenhab using Google Home app from iOS phone, however I’m stuck at the linking where I can’t make it work since it keeps telling me “openHAB is linked” then few seconds later “Something went wrong. Try again”.

How the issue happened: I linked my Google Home iOS app to openHAB as documented and explained. Note that I had no items when the link is done and I faced an error due to wrong items file format. Then while I was exploring the myopenhab.org as part of the troubleshooting, I went into the application tab and removed the Google OAuth and from that moment onward my Google Home app kept stuck on the state where it says “openHAB is linked” then few seconds later “Something went wrong. Try again”.

First things first, See below image showing that currently there is no linked openHAB on Google Home 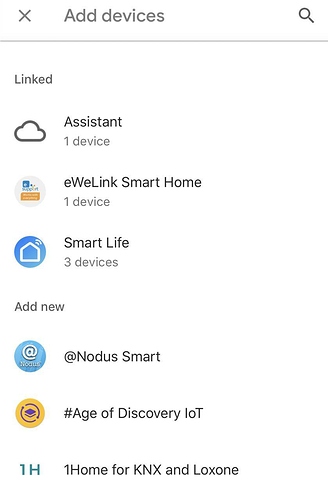 Note: myopenhab.org is reporting that my server is in online status.

In nutshell, seems that my old Gmail account is stuck at a stage where it still thinks there is a link between itself and myopenhab however I’m pretty sure that the link is removed from my Gmail security and myopenhab application section.

Fixed :). To let others benefit from this experience which took me hours and hours to troubleshoot.

It was related to Google Home App on my iPhone. I simply tried the same step of linking Google Home to openHAB on a different Android mobile device and got the OAuth prompt poped and entered myopenhab credentials. Once the openHAB link was established from my Android device, I found the openHAB link was added successfully to my Google Home App on the iPhone as well and all my items appeared and Google OAuth entry on the myopenhab/applications is there now.

I had the same issue, but your solution did not work for me. What did work was to first unlink the previous authoirization on Google. You can do that here: https://goo.gle/2N1c1pR

Yeah the step you mentioned was the solution for many people. But as I mentioned Juan, in my case it’s very weird that it got stuck although I removed the links from Google Home app and Google links you mentioned which is the OAuth sessions from my GMail account.

The only solution was to reestablish the openHAB link from another mobile phone (in my case I did it using an Android phone) then it worked.