I’m new to Openhab and zwave and am having some problems pairing to my Greenwave powernode (UK) version.

I have successfully installed the Zwave.me UZB1 and paired 2 powernodes, but they are showing as unknown devices. I suspect that this is because the UK version (NS210-G-EN) is not in the DB as it looks like a device is in there.

Any ideas how I can get these nodes working?

We’d need to know the device type and ID. This is shown in HABmin -:

If the device is unknown, it’s normally also printed in the name of the entry when it’s included…

Thanks for your speed response.

This is the same as is already in the database - are you using OH1 or OH2, and what version?

as is already in the database - are you using

I am using OH2 - installed in the last couple of days using openhabian.

Ok - unfortunately you’re using the release version which is going to be difficult to upgrade to the latest snapshot. It should work for this device, but these Greenwave devices have bugs that I’m trying to work around at the moment. The device should detect ok though - as a matter of interest, what happens if you restart the binding?

Ok - the database seems to be versioned - not sure if this is needed, but your device seems to show version 0 at the moment which might be the issue. Try reinitialising the device -: 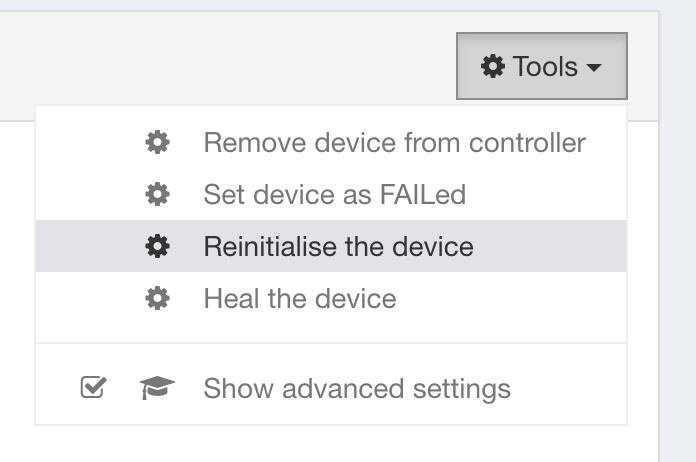 As i have been writing, they both seem to have been picked up. Cheers for your help.

What are these bugs you are working around and are they in a later version of OH?

Was it this issue which just missed the 2.0 release. Should I move to 2.1 snapshot and retest?

I have some of the Greenwave plugs as they were £20 but I find them very unreliable. The seem to reject commands sometimes and not talk at all other times. I also found them very laggy.

What are these bugs you are working around and are they in a later version of OH?

The bugs are not in OH - they are in the device. It’s related to the way the device handles endpoints.

OK Sorry that what I ment. Does a later version of OH work around these?

Yes, I believe so, but I haven’t tested it myself as I don’t have any of these devices.

Just to note I have updated to the 2.1 release and the Green wave plugs are behaving much better. It can take a few attempts to bind them but once part of the network they seem to be much more reliable.