I’ll try this out tonight. Sounds logical to me. Will update the PA. Assume the HomeServer will still work ok in the new mode?

HomeServer should continue to work even after the PA change. Check the HomeServer configuration in advance to see how it is set to connect to the GIRA Router. It should be based on tunnel config (with the IP 192.168.1.12 of the Router).
If anything goes wrong, revert back to the original PA (1.0.255).

Since the IP will not change, the HomeServer will be able to connect to the Router without problems and establish a tunnel.

Remember to configure the Filter Table also on the KNX Router. Add a dummy application in your ETS Project that represents OpenHab and link the Group Addresses that you want to allow to be routed between the 2 “worlds” (KNX Bus and IP). Put this dummy App in a new Line (e.g. 1.1) and give it a PA in that new line (e.g. 1.1.200). Then, link the GAs to the dummy app and the ETS will automatically calculate the Filter Table for the Router. Reprogram the Router afterwards using ETS.

Think I’ve stumbled on another issue…

Do I need to create a new line with just the IP router on it now? Currently it is on the same line as all the other KNX devices.

The error that you are getting is because your Backbone Area has “TP” set as the Backbone Medium (this is the default in ETS Projects).

To change that to IP, go to the Topology Workplace Panel in ETS and select Topology from the left side, then Properties->Settings->Backbone Medium->IP.

Here is my setup (with the extra line holding the dummy application for configuring the filter table in the router): 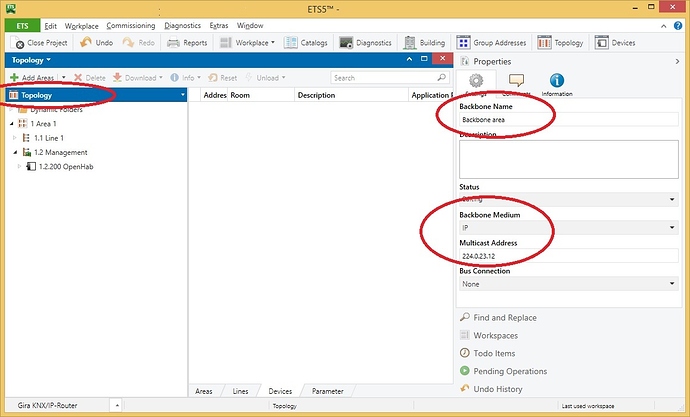 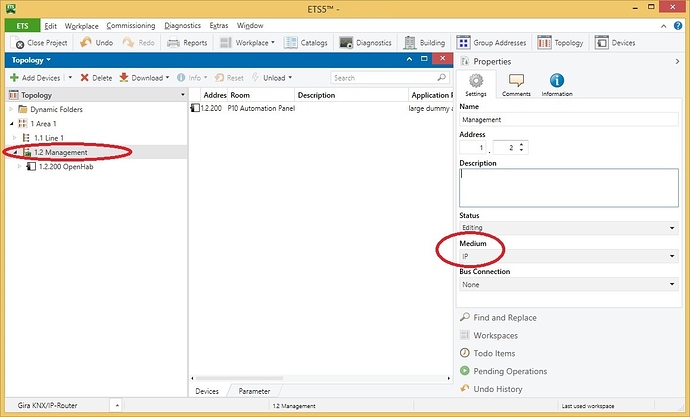 Ah…that moved all my devices from Line1. When I try to drag them back I get an error

Am on ETS4 not ETS5, but that shouldn’t make a difference I don’t think

Ah…that moved all my devices from Line1

Keep Line Medium to TP. In this way, you shouldn’t affect your existing devices. All the old devices (and the Router) should stay where they are (in the existing Line)
Change Backbone Media to IP to allow you to reconfigure the PA of the Router

Also: Use the Undo function if something goes obviously wrong. Don’t try to move more stuff around since this could create a mess

Will give that a try tonight.

Think I understand what I’m trying to do…

Am I getting that right? (I’m not really a networks guy!)

The Link between the 2 “worlds” (TP and IP) is the Router.
It is positioned in the TP Line since it is primarily a TP device and can see all KNX Telegrams from other TP devices in its line.
The Backbone should be set to IP to allow the Router to communicate the Telegrams “upwards” towards the IP “world”

So the HomeServer must talk TP, which is why that works ok in my setup and openHab doesn’t (yet!)

Well… I don’t have a GIRA HomeServer, but from what I know, it is a regular IP host/device (similar to a Raspberry Pi or a PC running OpenHab)

It has it’s own IP Address and connects over IP to the GIRA KNX/IP Router.
The HomeServer does not directly “talk” TP since it doesn’t have an interface for KNX Bus.

In theory, the HomeServer establishes a Tunnel connection over IP to the Router and can receive/transmit Telegrams from/to the KNX Bus via the Router.

In parallel, we will configure the GIRA KNX/IP 103000 Router to properly use Multicasting so that OpenHab 2 can also communicate with the Router (using the 2nd method: routing) so that we can also access KNX Telegrams over IP.

You’ll see I’ve linked the group addresses I want to use to the dummy oenHAB app.

I have also updated the group address and application software in the router using ETS.

Ran openHAB again in ROUTER mode, still seem to be getting the ‘waiting for connection’ message ;-(

…it should have worked by now

Ok… now we need to check the OpenHab logs… Please enable trace for the KNX communications by:

(assuming that you are running OpenHab 2… by the way… which OH version are you running?):

I’m actually running openHab 1.8.3 with KNX binding v1.8.3. Thought i’d get it working on the stable release first. Do you think i should move to 2.0?

Also, the KNX Binding is being prepared by the developers for many great things in 2.0.

I do recommend going to 2.0 Beta 4. It is very stable and I have it running for 4 months now without (major) hiccups.

Download 2.0 Beta 4 from here: https://bintray.com/openhab/mvn/openhab-distro (or even better, follow the apt-get instructions in the wiki below if you are deploying in a Linux host)
Installation wiki here: http://docs.openhab.org/installation/index.html

Have downloaded and will connect it up to my KNX tonight. UI looks great and the config appears much easier.

Have tried to connect, and getting the following new error…

What do you recon?

For Router mode, it should have the following settings:

Will see where i get to next!

This is good progress…but… that message (established connection) is a bit misleading… because at that moment in time, OpenHab 2 just believes that everything is ok (after reading the config files and loading up the KNX Binding).

Unfortunately, at that moment in the log, there is no verification / confirmation received by OpenHab from the GIRA KNX/IP Router that a connection has been established.

The only real test is done after you configure your items and sitemap and try to play around with them… if this works… you are all set and the binding is working fine.

I wish you luck for the next step

Let me know how it goes!