I have just added a new ZMNHWD that I would like to operate in 4 dimmer mode, instead of RGBW mode. The mode is changed by altering a configuration parameter (Parameter 14) then excluding the device and re-including the device.

In Openhab2, when the device is in 4 Dimmers Mode I see the same channels that are listed in the RGBW Mode. I expected to see 4 endpoints and no color options when in 4 Dimmers mode.

I noticed that after following this procedure the node XML file that is created in {userdata}/openhab2/zwave is different between the 2 operating modes.

Could someone offer some guidance on how to proceed?

I wonder if you could take moment to advise on how best to update the zwave database for this device (https://www.cd-jackson.com/index.php/zwave/zwave-device-database/zwave-device-list/devicesummary/567)

As I have tried to explain (probably poorly), depending on the value of Parameter 14, the device will create node files with different endpoints and command classes.

Would it make sense to merge the two XML files and update the zwave database?

Hello, have you managed to sort this out? I really would like to replace my Fibaro devices with the Qubinos since I need better RF properties. I’ve got massive wooden walls which acts as really good RF dampers. And since the Qubino has Z-wave plus they are at the moment the units that I’ve chosen. And at the moment I am using the RGBW channels for individual LED strips.

Thanks for prompting me to get back to this.

@chris: I have created a ticket for access to the zwave database and a merged XML file for this device to allow it to work in the 4 dimmers mode as well as RGBW. The merge combines the XML files created in Openhab for this device. These files vary depending on the value of Parameter 14.

Thanks Chris. If you can approve my access to the zwave DB (user: bjackson), I’ll do that early next week.

I uploaded the merged XML file but didn’t see the new endpoints, so I have manually added them. I hope I haven’t created extra review work for you.

In the XML file there is a commandClass: COMMAND_CLASS_MULTI_CHANNEL_ASSOCIATION but I don’t see that option in the database drop down. What do you recommend? (https://www.cd-jackson.com/index.php/zwave/zwave-device-database/zwave-device-list/devicesummary/567#endpoints)

In the XML file there is a commandClass: COMMAND_CLASS_MULTI_CHANNEL_ASSOCIATION but I don’t see that option in the database drop down.

You can add it if you like - it’s always nice to have the database correct. However it won’t make any difference to the operation of the binding.

I tried to add the command class by typing them in but the database did not allow me to proceed with adding it (see images). 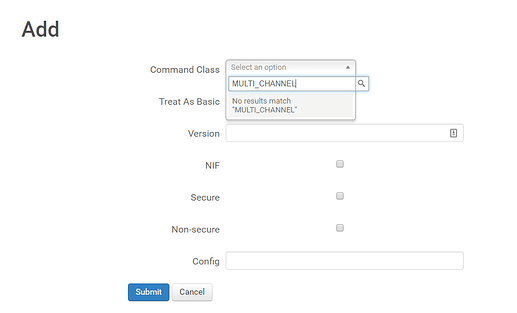 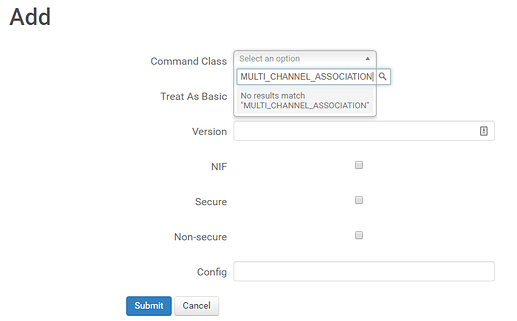 In the database it’s called MULTI_INSTANCE_ASSOCIATION.

Perfect. Thanks! The device is updated and submitted.

1 thing to add:
I tried to add the Qubno ZMNHWD and failed with the 4-dimmer mode setup.
Reason: firmware was version 1.5.
Update of the firmware solved the problem. My firmware version is 1.97. Now I can use the 4 dimmers.
For the update: contact Qubino, they provide a good documentation and the firmware file.