[SOLVED] Unresponsive Z-Wave Network: Tools and Approaches to track down the issues

Analysis of issues within a Z-Wave network

I am sure many of us that run bigger z-wave networks have already or will eventually get into some challenges. Over the past months I had to track down issues myself until finally my z-wave network was so unresponsive that it took up to minutes until an actor would react on a command which basically drove my nuts!

Thanks to a lot of community ideas and in particular @OMR (and a superb support guy from aeotec named Chris!) I found a lot of ways to analyse, track down and improve my network. As I learned so much during this time I thought I should share my experience. Feel free to add yours in the comments.

I even found out that a zwave stick shift turned out to be much simpler than I had expected (at least in my case).

So without further ado, here are my learnings and recommendations.

I a nutshell what I have learned

14 Likes
Newbie: How to use the Expiration Delay Metadata
Documentation for Zensys pc controller
How to get all data from z-wave-devices?
Zwave (OH3) - Motion Sensor not sending "motion_alarm"
Z-Wave controller started crashing out of the blue
Zwave random delays
apella12 (Bob Eckhoff) May 17, 2021, 10:48pm #5

I have not used the Suphammer, but based on the screen shots, the zniffer setup (that I use) seems more readable. For me it just required a UZB ($35 USD) and the free Silabs software. I found the instructions here. Output looks like this:

Lastly I also had great luck with Chris from Aeotec in the past. Hopefully that is a real person and just not just a screen name for all their tech support.

Thanks also for this post, it (finally) made me install the UZB I have been having lay on my desk.
Now that I did, I’m seeing many messages from node 000 with CRC error, maybe 1 in 20 but sometimes there’s batches.
Is that RF noise ? I have another system running on 868 MHz. It is not supposed to create that much traffic though as it’s battery powered nodes only, only ever sending when they cannot avoid.
Has anyone an idea how to find out ?

It’s hard to say. I get a few. I believe most are frames the Zniffer did not fully get based on it’s positioning and/or weak signal. Mine is right next to the zstick. Some can be deduced from context. For instance;

Node 75 is actually outside of the basement at the far end of the house. It sends the outdoor humidity and temperature hourly. Note the low RSSI on the CRC frame. However, since there are two hops line 122 is likely the multisensor report going from 58 to 60 (like line 127 -that one got picked up) and line 126 and line 133 are likely a missing ACKs from 58 to 75. Looking at the OH UI both measurements got through.

CRC in zniffer are normally just out of range to the zniffer stick. If you consider some of your nodes need to have a repeater to communicate across your network it is not surprising to see CRC from those nodes outside the normal zwave range of the zniffer. Best to use zniffer in a laptop so you can move around to get the traffic from different places.

That said worth checking the RSSI column as if this is showing a good signal and still CRC issues it could be a bigger issue. I have seen traces with many CRC in networks with older devices and some FLiRS devices and on investigation the CRC were issues with the beaming and the node 000 rings a bell with that issue. Do you want to post some traces?

Of you look at the HEX of the CRC you can sometimes work out what is the non corrupt command and what got mixed up.

Yeah I have done that too. I do not get many, just happened to be zniffing when I saw the post. Of my 46 nodes, 36 are direct shots, 4 need a hop and 6 are 2 hops. For me, never really see CRC on the close-in nodes and it is always with low RSSI.

, I have a desk top PC, so can’t go wandering around. My setup 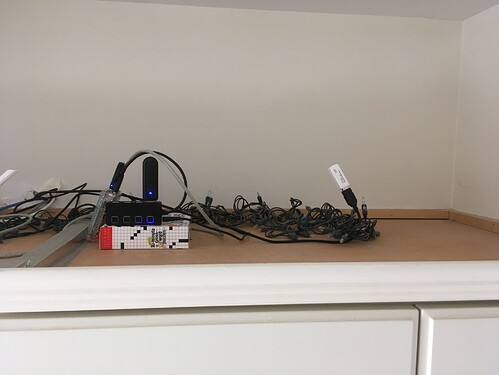 great thread, thanks @stefan.hoehn you are a rock star

Chris…Hopefully that is a real person…

Yes, Chris Cheng is a real person who besides Sebastian doing the the support - I asked him he confirmed that

Probably one of the best support I ever got.

but I always get the following message first:

“Please download either a Controller SDK or Embedded SDK before downloading Z-Wave tools. Contact support if any queries.”

How did you get around this? (or do I have to download Simplicity Studio?)

One of my problems is that I don’t take great notes. I vaguely remember something like that and poked around the site and may have downloaded a SDK, but I did not pay anything, that’s for sure. Also I had Simplicity studio installed some time ago. It has the Zniffer app, but you need the programmer and it does not have that. Since I have both a standalone Zniffer and one in the Studio, I must have gotten the download to work, let me see if I can recreate/recall/find what I did.

Stick Shift: You can easily backup a noname stick and restore it to an Aeotec stick

Were you able to use the Aeon Backup Software to backup yould old Non-Aeotec stick?

Yes, that was what surprised so much. It worked like a charm.

That is indes surprising…which Stick did you have?

I replaced / shifted the ZMEE UZB1 to the Aeotec Gen5+: 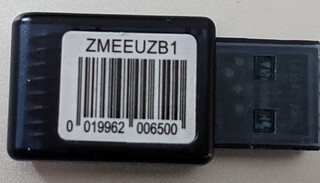 Thanks Bob, I found out that the issue is actually that the tabs, hence the download tab, doesn’t work in firefox. So one has to use a different browser. I added the Silicon links to the top of the thread.

Btw, I definitely recommend to read the “Z-Wave networking Basics” pdf that comes along with the SDK download.

Even though the installation process is described in full detail and nothing is missing, here are some tips to become succesful in doing it as the process is far from being intuitive.

Finally the nerd factor is pretty high when it works

Thanks for posting this.

I’m struggling with how to recover nodes 2-5 on this stick. Is there any way except by resetting the stick? 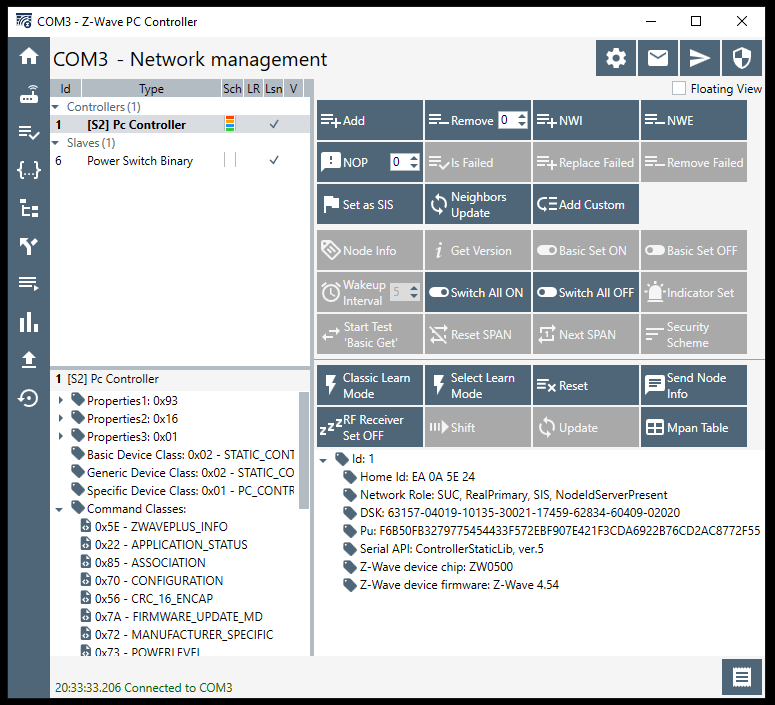 Using PC Controller you can remove the zombie nodes. I think it is up to the controller whether to re-use the IDs though. Removing the nodes is recommended to maintain network health.

Short answer is no without a factory reset. I have read that once the maximum number is reached ( and it’s somewhere in the 230-255 range, new Nodes will be assigned in the unused spaces (like 2-5) in your case, but I can’t verify that. I have 47 nodes and my last one is 79, for example.