It may work OK assuming we have the the correct device & type entered. We got that information from your xml file.
I think the switch will just ignore unneeded items. I have a sensor where OH defines a temperature senor that does not exist on my model. My sensor just ignores that and works fine.
I added the association groups and requested review.

Cool. I hope it works.
The IT guy at the store said that, as far as he knows, the manual should be relevant for both switch types.
Honestly, I’m not convinced he actually knows what he’s saying, but once the binding is configured I will test and we will know for sure

When should I test again?

I have a second problem I could use your assistance with. I’ll ask it here, but if you say it merits opening a new topic I will open a separate one.

As I said before, I bought two Lumi switcher types for my apartment.

In this topic so far, we discussed the first switch (2+2), but I also need to configure the second 4lights switcher.
The problem I’m facing is that the Zwave Binding for OpenHAB doesn’t recognize the 4lights switch as a node when I put it in Inclusion mode. It just doesn’t show up, so I can’t pair it with OpenHAB.

In order to negate the possibility of a faulty switcher box, I tried to add the 4lights switcher as a node in Domoticz. And, unlike OpenHAB, Domoticz was able to recognize the 4lights Switcher as a usable node.

Did I do something wrong with OpenHAB? is there anything I can do to make OpenHAB find the 4lights switcher as a node?

When should I test again?

I will try to keep an eye on this. I look for the following, in order

You can then update the binding. What version of OH are you currently running?

OK, the easiest way to update the binding, when it is available is through @5iver’s script. MAke sure OH is running so it can uninstall your existing binding. After installing the new binding, delete the Thing from OH and rediscover.

A number of people have run into trouble performing manual installs of the Zigbee and Z-Wave bindings. A manual install (dropping the jar into addons) is rarely needed, but some people prefer a manual install over apt-get, or want to use a stable OH release with a recent Zigbee or Z-Wave binding. Here is a script that will hopefully make it easier to install, upgrade, and uninstall these bindings, and prevent some of the common issues. Note: the development Z-Wave binding has been merged into th…

Thank you, but this script is hard to use for a noob like me with no programming skills.
If I delete the OpenHab folder from my Mac and reinstall OpenHab again, will it forget the old z wave binding and install the new binding with support for the Lumi switches?

Also, do you have any idea if I can reset to factory settings my Philio USB Z-Wave Controller (model PAU01), so that it forgets all previous paired devices?

Actually the script should make it easier for noobs.
If it does not work for you uninstall the current zwave binding, download the zwave snapshot binding
https://openhab.jfrog.io/openhab/online-repo-snapshot/2.5/org/openhab/addons/bundles/org.openhab.binding.zwave/2.5.0-SNAPSHOT/
and drop it into your addons folder. You may have to restart openHAB.

If I delete the OpenHab folder from my Mac and reinstall OpenHab again, will it forget the old z wave binding and install the new binding with support for the Lumi switches?

No. You need to change the zwave binding version to a recent snapshot version.

Sure, do a hard reset on your stick: 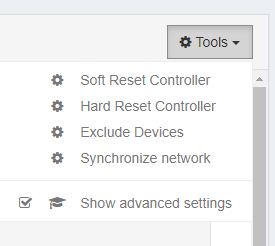 You do not need to reset your zwave network to use a newer binding. You can just delete the device things from HABmin and rediscover them. They will be rediscovered with the same thingid so the rest of your configuration will work without changing.

Actually the script should make it easier for noobs.
If it does not work for you uninstall the current zwave binding, download the zwave snapshot binding
https://openhab.jfrog.io/openhab/online-repo-snapshot/2.5/org/openhab/addons/bundles/org.openhab.binding.zwave/2.5.0-SNAPSHOT/
and drop it into your addons folder. You may have to restart openHAB.

Thank you for the detailed explanation.

I uninstalled the ZWave binding, shutdown OpenHAB, copied the 2.5.0 snapshot into the Addons folder, and restarted OpenHAB.
Once restarted, in the Configurations/Things tab I’m seeing the Zwave Serial Controller as “UNINITIALIZED” and on the Addons/Bindings tab the Zwave binding is not shown as installed.

Have I missed something?

Since tyou just copied in the binding, I think there is another depencency if you are running OH 2.4. That’s why I generally recommend the script. I remember chasing down the missing dependency when I used a snapshot binding on 2.5M1.

Based on quickly looking at the script, you may be missing this dependency needed in the addons folder. You should see errors in the openhab log.

If it’s not too much trouble can you explain how I should execute the script?
I followed [5iver] link to the github project of openHAB-utils.
From reading the README.md text, I understand I need to copy the zzManualInstall.sh file into the addons folder and then run this command using terminal to execute the script:
bash zzManualInstall.sh --ACTION zwave --ZWAVE_BRANCH development

I didn’t find an option to download the zzManualInstall.sh file from github, so I copied the file content from github and created a .sh file by that name using Brackets app, and I saved the file into the addons folder.
Then I tried to execute the bash command in terminal within the Addons folder, but I got a message: bash: ./zzManualInstall.sh: No such file or directory

I will need to look at that when I get home. I am currently at work in the eastern US.
Since I am running 2.5M2 I am not sure the script will work.

@5iver This is your script. Any ideas?

@5iver your assistance will be much appreciated.

I will look at this the first chance I get, but I’m a bit busy ATM.

When I get to this, I’ll update the topic for the script. The readme has manual steps to DIY the install.