So after i was able to successfully change one light switch to a zwave microswitch last week, I was hoping to replicate the same on the other switches but this one looks a bit different.

from what I understand, the black wire at the bottom is Live and the other two are travellers (which is against confusing for me since this was not supposed to be a three way switch, it is the only switch that controls the light in the room).
Now from what I have read, the travellers should have been together on the same side so seeing the black wire at the bottom is throwing me off).

I am looking to add a aeotec microswitch to this setup.

any help to decipher this is much appreciated.

Should I just use the two black wires as load and live along with the one neutral wire? 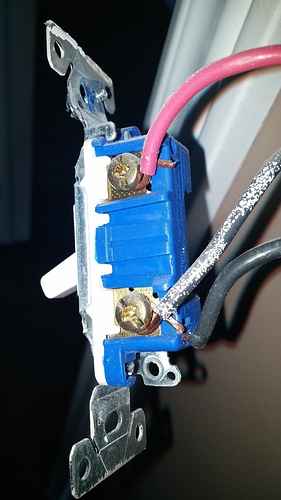 edit: never mind, i think the red wire was only going off because it was in close vicinity of the black live wire. i removed the wires from the switch and the black one is live the red one is the traveller. Just dont understand the second black wire connected to the back of the switch.

in case someone else encounters this:

It could also be going to another light switch or an outlet in the attic or basement or both depending on what you have. Someone was just lazy and didn’t want to put a wirenut and and a extension wire on it. I would tie the two blacks together. It could also be going to the motor control switch of a ceiling fan that way the fan has power all the time and the light is switched.

so I spend three hours doing this today. wife gets home and figures out that the wire was actually going to another light in the hallway.

Had to open everything back up and hook up the wires with a wirenut. luckily I had just enough wire to accomplish all this.

anyways these microswitches from aeon lab are very hard to fit into single switch boxes and force me to clean up the excess wire. wish we had other options in smaller form factor.

One thing I would be weary of is cutting the wire too short. There is no such thing as a electrical “Wire Stretcher” and once it is too short the only option is to replace the whole wire run from box to box.

the touch panel is on now. if i ever decide to move back to regular switches, there will be enough room for wirenuts to extend the wire.

but you are right, i was worried there for a while when I was trying to get the other wire connect to the live one.