Sonoff PoW online, but no webGUI

after I tried to update the Sonoff OTA with the newest Firmware three months ago, I found the time to go through the Sonoffs again.

I have two Sonoff PoWs, from which one was dead after the OTA Firmware update. So i had to disconnect both and directly connect my washingmachine and dryer. After flashing the new 5.8 firmware (minimum) to the dead device, it came online again. But: curiously enough, I see both devices in my Fritz.Box, the’re getting the IP-adresses I configured, but I can’t see any WebGUI; if I type in their IP-addresses in the browser, it just says timeout connection errors.

What i see in the logs is strange: they connect and reconnect multiple times within minutes? 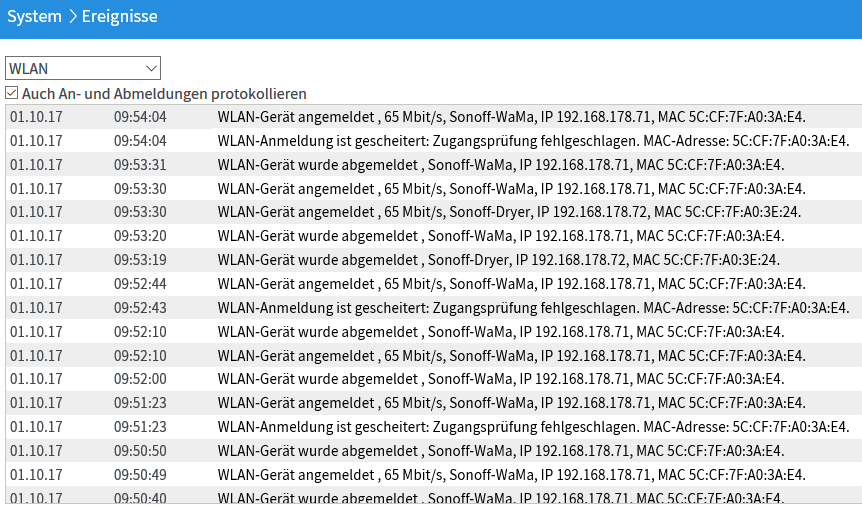 Any thoughts, which I can do?

I assume you are using Sonoff-Tasmota

Did you read this ? Because it does read like, this is the minimal version you need to install the full one afterwards.

sonoff-minimal.bin = is interim firmware to be used when the above firmware images become too big to fit as OTA or web upload; installing this one first and THEN uploading the desired sonoff.bin allows for future firmware size growth over the OTA file limit of 1/2 flash size.

yes, I read this; first off I was a bit surprised to see my sonoff connecting with “minimal firmware” to my WLAN!

I flashed the sonoff.bin afterwards and I am still struggling to get it running. It seems, both Sonoff POWs do interfere in some kind or another with each other. After rebooting my Fritz.box I can get either one connecting, if I’m lucky, sometimes neither would connect…

could be something Fritz.box or even my Fritz.box configuration specific. I’m still trying to get both online!

Could there be a Problem with the Ports? Because Web Interface should be Port 80.
Maybe your Fritz!Box does not allow Port 80 for your Sonoff Device/s.

Thanks Elias for your help!
I did have both devices up and running for months until I dead-flashed one. I didn’t Change the Fritz.box configuration then. And I don’t think ports are the problem, but the Wifi as both get thrown out of Connection the second they connect (as seen in the second screenshot)…

I’ll try to delete the DHCP configuration regarding both devices, perhaps this helps…

Sonoff-WaMa looks like it is configured wrong. Wrong Wifi password I would say.
Because first it connects, then the Fritz!Box logs it out and tells that the authentication failed.
But you already said you did not change the Fritz!Box configuration. So this is wrong too…

Second thought.
Could there be a Problem with the MAC Addresses?
You flashed the Sonoff-Dryer MAC 5C:CF:7F:A0:3E:24
Maybe there is a duplicate in your known device list and your Fritz!Box is throwing the new Device out because it is suspecting a MITM(Man in the middle) attack.

Try to delete both Sonoffs from your known devices list. (I know there is such an option with Fritz!Box I own one myself)
https://en.avm.de/service/fritzbox/fritzbox-7390/knowledge-base/publication/show/262_Deleting-a-network-device-from-the-user-interface/

So the MAC Address was the problem!
Glad I could help

As I deleted the devices from the list, they connected after a last reboot from the Fritz.Box.

Strange, but perhaps it was a security feature as you described!