Hi there,
I’m pleased to be able to contribute once in openHAB project. Yesterday I discovered something which was not yet supported directly by openHAB : Steam

a steam connector that provides the following channels:

Such channels allowed me to create some rules to turn off the top light of the office when starting a video game, turn on philips hue color bulbs in blue, turn off the music playing on sonos etc.

So I see a real potential on it personally.

Would you expect something more from this extension ?

Maybe a channel for the time spent playing games today? (or this month/year or forever) That way I could shut down my kids computer when they’ve been at it for too long

puter when they’ve been at it for too long

Very cool , my gaming days are gone but will reutrn
what about start the game?

I’ll see what steam provide but we can retrieve time played per game so something like that should be doable.

A few note to take in considerations (steam only allow to retrieve such informations if the steam user profile is public. (it’s a setting)

I will also add a channel that will contains the profile status (public, hidden, friends only) that way you are able to manage it into your rules too.

Another idea: add a channel to get PEGI level of the game currently played.

That way parents could define some rules: “When my 6 years old kid play video games for 16+ notify me”

what about start the game?

This is something interesting but steam API does not provide such power.
If you look for such behavior I would more go to MQTT -> PC (I’ve seen some projects about that but seems quite buggy unfortunately

Work in progress but on good way to be released as an alpha version in a few days: 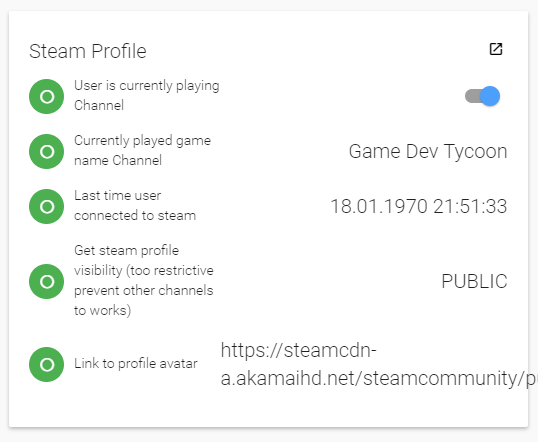 WARN: it’s not stable enough yet and I need to figure out some concurrency potential issues but looks pretty cool for now.

Regarding the feature requests I will try to add them after the first release is accepted by the openhab maintainers (step by step) that way this binding is not too big and it give them less work of reviewing.

Wow few months later still not available. I’m sorry guys… had really 10k things to do at work and had to put it in () but I will come back on it in the following weeks for sure.

Okay, is this still gonna be a thing? @sbeex
Because if yes im for sure gonna use this

I realise this is a year old forum, just hoping something is still in the working

there is something new on the topic of steam notifications in openHAB
is there another way to see the Steam friends in the OH2?