Dear all,
I am facing a strange behaviour.
I configured the iRobot binding and I am able to properly send command to my cleaning robot. 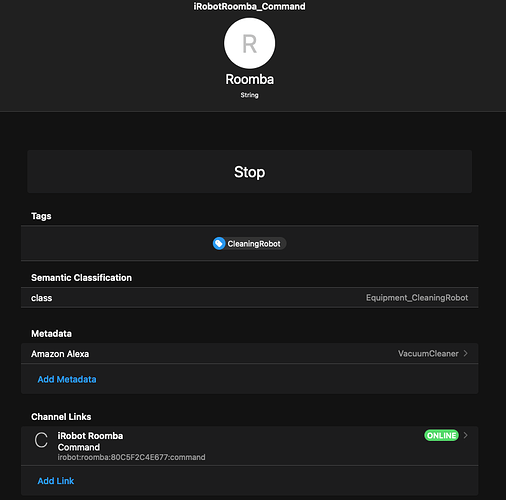 I connected the item to ALEXA and it seems properly configured.
Unfortunately, it doesn’t work: when the command is sent via ALEXA, OH elaborates it but then nothing happens. According to the logs, everyhting is smooth an no issues:

Different beahviour if I set the command via OH UI it works:
I set CLEAN 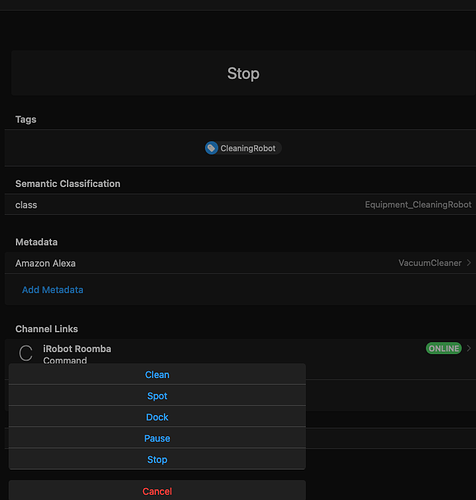 The logs are same:

but the robot starts working.

Do you have any idea ?

Thanks in advance…
Saluti
M

The logs are same

No, the logs are not the same.
One log is uppercase and the other is lowercase.

Have you verified if the binding or your irobot is maybe case sensitive?

That’s true but apparently there is no way to send lowercase. 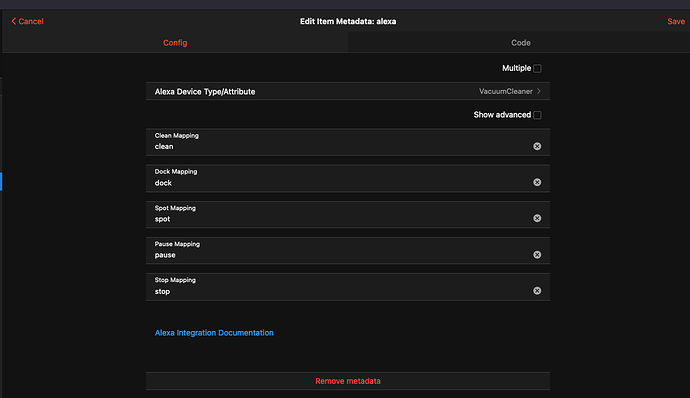 Even by setting lowercase a command via Alexa is “sent” uppercase…

Have you validated by e.g. manually via script / rule / rest API if the uppercase command is causing that the command will not be executed?

Let me say that your guess was right: it is a matter of case sensitive commands.
Now the way I fixed is quite unexpected but I want to share it.
It is problably a bug somewhere.

I created a new ITEM that was not linked to any channel.
Type STRING.
Semantic class CLEANINGROBOT.
I added ALEXA Metadata as VACUUMCLEANER.

It was not linked to any channels; I just checked in the LOGS if the commands through ALEXA were fired as lower or upper case.
Surprise: they were lower case.

I then linked the ITEM to the THING iRobot and the command channel as well.
Surprise, the commands from ALEXA are fired lower case.

Thanks Matze0211 for the inspiration!

Now the way I fixed is quite unexpected but I want to share it.

Keep in mind that any Alexa metadata changes you make requires to trigger a discovery on the Alexa side so these changes are propagated.