I added the parameter rtuEncoded=true,

Why? Are you using the development binding version?
Why? Have you any reason to think anything involved is using RTU over TCP?
You won’t fix this with random guesses.

No, but the Modbus protocol does.
It’s considered a broadcast. The rules say, that slaves may listen to messages addressed to id 0 but you must never respond.
It’s not uncommon for any given device to break the rules, but don’t expect it to work.
A few designs use id=0 as a sort of factory test tool or suchlike.

You won’t fix this with random guesses.

It seems no to be possible to change the inverters Modbus TCP id, this was just a test with a simulator.

A few designs use id=0 as a sort of factory test tool or suchlike.

I would be happy with that, and as it seems to respond to other MODBUS masters i was hoping it would work with MODBUS binding as well.

Let’s go back a step. The SUN2000-(2KTL-6KTL)-L1 has no native TCP capability. But there are optional dongles you can fit for that. Which dongle do you have?

I have no dongle, but i understood from

that it should work without a dongle.
In the same topic they are talking about MODBUS RTU serial connection. So I was hoping to be able to get the needed data without adding a dongle.
Is there maybe a way to bypass the MODBUS Binding limitation to be able to read the data as QModMaster does?

Why? Are you using the development binding version?

Thanks for highlighting this, I should have emphasised that this might not be included in latest stable releases

Modbus “broadcasts” (using id=0) have been considered before

Anybody know a way of creating a ModBus "BROADCAST" message? Bindings

Title says it all, I am trying to send a message to ID 0 over ModBus RTU. (This is a broadcast type message meaning all bus members receive it but nobody answers). I’ve tried adding a bridge with id=0 and a a poller with refresh=0 to which I added a single data thing (without readstart but with a writetransform as I need to send some bytes) but the binding does not seem to write to the bus… If someone knows a trick to get this to work I’d be thankful if it could be shared. Steven

In essence, you can make broadcasts to id=0 from the binding but may get warnings. (no response expected, of course)
I don’t think the changes needed to handle broadcasts warning-free have been put it place yet, but they would certainly stop you doing what you’re trying to do, use id=0 as ordinary read poll.

I see no reason to break the rules of Modbus protocol for everyone else in order to accommodate one person.
Put it another way, other people have made this device work with no such fiddling. I believe that has been done via connection to the RS-485 serial instead, though.

If your device modbus id=0 and cannot be changed, then it would be broken and useless. So we can figure out from that, that maybe the problem is that you haven’t found out how to change it…

I think you’re already well aware of this - How to change modbus TCP salve id from 0 to 1 - Huawei Enterprise Support...

which seems to boil down to “you can’t change the id from 0 (on the onboard WiFi)”.
It’s quite possible that Huawei deliberately do this to discourage access this way.
Probably related to the onboard WiFi being in AP mode (own SSID) - how have you worked around that?

Background;
From what I can gather, the nnKTL-L1 series comes with an onboard WiFi, but it runs in AP mode (i.e. makes its own wifi network, not joining yours) for use with a proprietary app for setting up etc.
Because that’s a private network, Huawei can use any rules they like - which may be incompatible with a normal network where other systems may exist.

I have updated my tutorial with modbus TCP but you need the Huawei Smart Dongle-WLAN-FE with the latest update.Without a Dongle is possible if you have flashed your router with Tomato or DD wrt software.And make a bridge from the inverters wifi to your local network.

I’ve tried to understand what I need to do to get it working with id=0,
but i didn’t …

I see no reason to break the rules of Modbus protocol for everyone else in order to accommodate one person.

You are right, but as i can see I’m not the only one who’s problem would be solved with this option!

There are 2 identical inverters in our house, and I would like to read from both.
They are connected / joined to our WiFi, and do also have the AP mode active.

make a bridge from the inverters wifi to your local network

I’ve tried this, but i wasn’t yet able to setup a port forward through OpenWRT.
However, i tried to connect my laptop to the inverter AP and the id is still 0 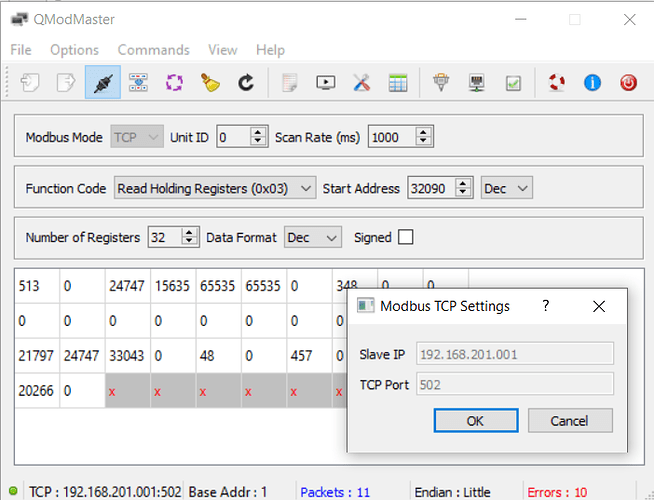 So the options are:

but as i can see I’m not the only one who’s problem would be solved with this option!

I have had a think about this, I’m sure that binding modification to deal with this case will mess things up for other people/systems using Modbus broadcast in the ordinary way. Basically, we can either expect responses or not, but not both.

Huawei need not care about that, because this part is supposed to be private to their products.

Having said all that, you’ve almost certainly got the un-fixed binding version which might well stumble through an exchange with id=0.
I wonder if you’re actually falling down at cross-domain issues, your test software is targetting a funny looking IP.

install a Ethernet-MODBUS RTU gateway and connect the 2 inverters

, so that they are unique on the one wire, but I don’t think that is a problem for the serial interface side.

Python script (seems to be much complicated)

I’ve no experience, but would not have thought too difficult using libraries. You only need a gateway function, passing messages to some localhost port to and from the real IP, but with an id fiddle factor. Let the usual binding do the heavy lifting with decoding.

will mess things up for other people/systems

or maybe not, if there was a “switch” parameter to enable/disable this behaviour?

I’ve got the 3.0.2 binding version and i tried to put the 3.1.0 into addons folder (which worked fine before migration to oh3, but now the *.jar file doesn’t seem to be read).

your test software is targetting a funny looking IP.

be sure you can change the Modbus id

I’ve found that option on the installer app, so this should be ok.

Retrofitting may or may not work. Pretty sure there are major framework changes from 3.0.2 to current development versions.
What are you hoping to gain here? An older version is more likely to work for you in this situation.

Well in this imagined script that’s under your control. I would envisage something that simply accepts modbus messages from openHAB binding, substitutes id byte,passes out to network.
And, listens for messages from network for similar treatment before passing to openHAB.

However,now that I think of it, this might ruin any other modbus use you might want in future. I presume your Huawei target port cannot be adjusted, and is the standard port 502, so the script would have to grab that. Forcing the modbus binding to use non-standard port (which it can do) … but not all other devices allow port adjustment either.

An older version is more likely to work for you in this situation.

Can you please tell how i could get this working and with which version?

I was trying to port forward through OpenWRT to the 2 inverters, but as the id=0 problem is still there, it makes no sense. 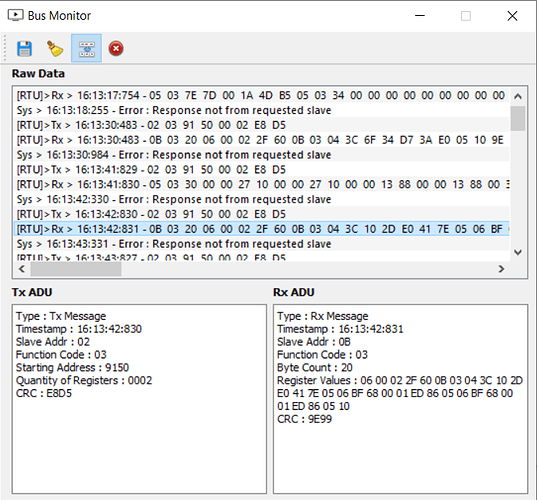 So i’ll have to go through MODBUS TCP…

If you are trying modbus RTU did you remove the Dongle because they dont work together?

I have no dongles

I connected data + to port pin 1 and data - to port pin 3 of the signal cable.
Make sure to reboot openhab after every change.
Modbus RTU works certainly.
Show me your config.

I didn’t try with openhab yet, i only tried with qmodmaster, as i don’t have the hardware to connect to openhab.
1 and 2 for my inverter is for cascading multiple inverters, should i connect through these port?

The power meter bus is intended to connect meters, where the inverter acts as Master and interrogates the meters. The inverter as Master is not going to respond to external interrogations from you.

In the other models there is a separate RS485 bus where the inverters role is Slave. Here you attach GSM gateway dongle etc. or indeed directly interrogate from openHAB.
That risks a clash as both dongle-gateway and openHAB want to Master and it won’t work (hence “remove the dongle” advice).

The supposition is that your model still has that RS485 bus but internally links it to a WiFi dongle.

EDIT - you’ve actually got multiple inverters, have you linked them (or intend to)?

No, i don’t want to link them, as they work on different POD, but i would like to read from them to openhab.
COM 1-2 is working with qmodmaster, thank you @rossko57 and @Rado1
So this could be an option, but i have to see if i can put them on the same bus or if they then try to work together …
I would also therefore prefer to use the MODBUS TCP connection, just (but this seems to be very complicated) have to get around the id=0 “limitation”.