Switch item for Homematic dimmer to switch between OFF and OLD_LEVEL

I have a question following up on this old post from 2016:

I have one HM-LC-Dim1T-FM (Dimmer) in my OH2-System and configured it with a switch On/Off and a slider. Both are working exept that ON always goes to 100% Dimm-Value. This is different to the behaviour in Homematic where last dimm value is stored. Is it possible to implement this as well? @gerrieg? Thanks & BR Michael

It has been over a year since this thread. The “OLD_LEVEL” virtual channel is a result of this discussion and long since available. Thanks for implementing it, btw!

While this is great, any Switch item linked to this channel behaves like a push button. So in order to set the old dimmer level for a dimmer that got switched off, this switch needs to be switched on. It then immediately returns back to off and the old dimmer level is set. So far, so good. Unfortunately there seems to be no easy way to get a “real” switch out of this. What I mean is one that turns the light off if the switch is set to OFF and back on again (to OLD_LEVEL!) when it is set to ON.

My question is if there is an easy way to achieve this or if a rule is needed. I know this rule would be quite simple. But still… the less code, the better.

So, how did you solve this? Rule or some other “standard” way I 'm not seeing?

Maybe I’m answering my own question. But I wanted to post the current solution, which is based on rules (because I currently don’t know better

What I want to be able to do is to quickly toggle a dimmer’s state between OFF and OLD_LEVEL while at the same time being able to adjust the level flexibly. The UI will be a HABpanel. Here’s my current setup:

Those items are controlled by the following rules (which are too complicated for my taste, but here we go): 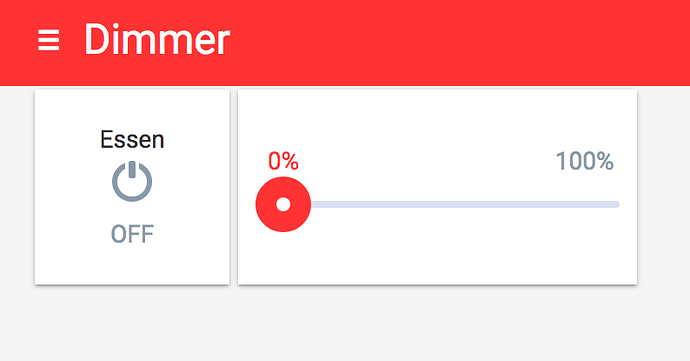 I’m very open to suggestions for simplifying this.

It’s perfectly fine, but I’d rater not have two rules per dimmer.