It was the openhabian image that I was having problems with initially and I was going to try the plain Stretch image today but it sounds like you have already done that.

I don’t mind too much if the sd-card is just used for the boot process and the rest of the operation runs from the ssd. Did you have some instructions on how to do that ?

This thread seems to describe the problem with the 3 B+ and maybe a solution - I’m not that savvy to understand it all.

Spent all afternoon with plain stretch and ssd drive - with and without external power but it just won’t reliably reboot. It will boot from cold and run ok - but a reboot is a non starter.

Finally settled on a micro usb flash drive of 128gb. Did a clean install of HO and it reliably boots and reboots without any SD-Card which will have to do for now.

Lots of posts on forums about the 3 B+ but nothing conclusive as to a stable solution. Maybe a plain 3 B would have been easier.

A plain upgraded rasberian stretch works on my ssd ok. I can shutdown and reboot cleanly now. I can’t shutdown from a newly created OH flashed drive. This is the same SSD that works with plain rasberrian lite.

There is s BCM number in the dump which might indicate what the problem is. The pi is connected to a physical network cable. 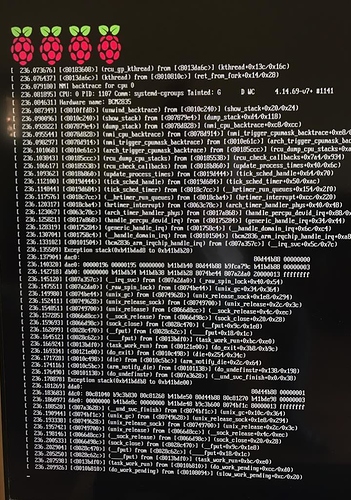 I tried a reboot sometime later and this appeared to display some kind of dump on screen for a fraction of a second and then all I got was a flashing cursor on the top right hand of the screen. I left it sitting there for about ten minutes to see if something would time out until I noticed that a small image of a thermometer appeared on the top right of the screen and the pi had become very warm. At this point I powered it off.

I don’t know much about Linux I have to admit but I assume there is a script or scripts which run when the system is shutting down. Is it possible that something in the script could be causing the problem but only when the system has not booted from the sd-card.

Would it be possible for me to boot from the SSD and type those shutdown commands one at a time to try and determine what is happening.

When reboot from the sd-card I see at least one screen full of log entries on screen before it comes back. If I repeat the process when booting from the SSD I see something like the previous screen dump for just a fraction of a second before the screen is cleared and it just hangs with the the cursor in the top left. If I leave it that way without pulling the power cable it starts to overheat so something is stuck in a loop.

Everything seems to run just fine on a Pi 3 with an sdcard. I don’t even have a cooling fan! Once it’s setup just fine, I take an image of the sdcard to another sdcard using a utility called rpi_clone. Then switch to this second sdcard to make sure all is well. From time to time depending on changes in the config files under /etc/openhab I backup these to my PC. I also keep a second Pi just in case. I thought about external storage but a local sdcard is cheap, self powered and discreet.

Are you cloning to a mounted share or to a local USB memory stick or USB SD?

As already mentioned some posts up, consider using Amanda. Can be used to backup and restore (thus also to clone) any raw device such as an SD card or SSD, and it will help you with automated long term storage of both, SD cards and files.

In my case a locally mounted sdcard thru USB.

No one best solution clearly just test the backup.

to copy everything from SD to SSD. Then identify new partuuid with

with new id from sda2. Reboot