Is it possible to update an item (A dummy switch), based on a thing’s state? I have a TV that the switch wont update if its turned off manually. The TV goes offline when off. Doesn’t appear I can do this with the NGRE.

Is there any way to configure one general rule to detect when a thing (e.g. a bridge) goes offline? Something like the following pseudocode: WHEN Thing * changes from ONLINE to OFFLINE THEN sendTelegramAction("Thing * went offline") END Cheers, Florian

[SOLVED] Rules based on Thing Status Action not fired Installation

My „Thing status” rules using Thing Status Action to get the online/offline status of a Thing seem not be fired reliably after upgrading to 2.4 release. That means e.g. after OH restart many of my thing status related items I switch with the rule show value “OFF(LINE)” although the related thing in paper UI (Configuration>Things) show ONLINE. Especially Hue things and Alexa things are affected. With 2.3 I had no issues. I use rules based on documented Thing Status Action example, e.g. rule…

Ok, so it’s just not possible through the NGRE.

is creating this error:

Doesn’t appear I can do this with the NGRE.

You can definitely do this with scripted automation and I think I have posted examples. Here’s one…

I have a lot of things in my test script that I need to get into the docs! Instead of using a group and associated Items, you could trigger on Thing change and then iterate through the Items linked to the Thing’s Channels… from core.rules import rule from core.triggers import when from core import osgi ItemChannelLinkRegistry = osgi.get_service("org.eclipse.smarthome.core.thing.link.ItemChannelLinkRegistry") @rule("Reset offline") @when("Thing kodi:kodi:familyroom changed to OFFLINE") def dev…

You can do it with the UI rule editor too.

This should be possible from PaperUI using the “a thing changes status” trigger. It’s definitely possible using text based NGRE rules (e.g. .py files under $OH_CONF/automation).

I admit though that I’ve not created a Rule with “a thing changes status” trigger in PaperUI so that might be one of the broken triggers. But that should be the same as your Rules DSL trigger in post 4.

And I don’t think you would need to call thingStatusInfo except for the fact that it has a System started trigger. The receivedEvent implicit variable should be there when the Rule is triggered by the Channel.

I might consider a different approach. If you are interacting with this TV through a network, which is what I would assume, you could use the Network binding to control an “online” Switch. Then you can use that Switch with visibility on your sitemap to just hide those controls that are not valid when the TV is OFF. No need to deal with the Channels directly in that case which makes everything a bit more straight forward.

You don’t have the option to send a state change to an item in the ngre, that I could find… 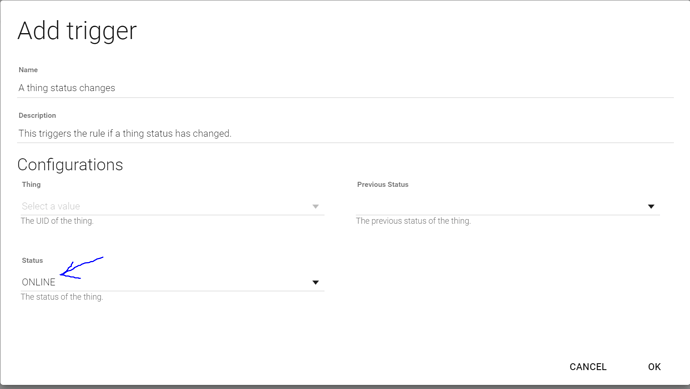 Repeat the two steps above for OFFLINE and OFF.

Or you can write it in JavaScript (or Python or any other supported and installed language). 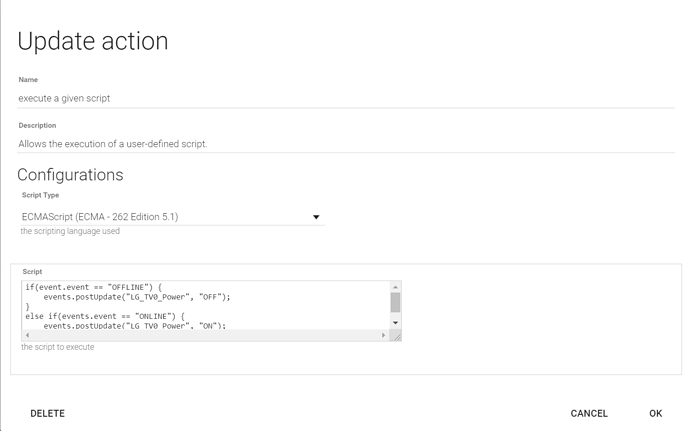 What you don’t have though is a System started trigger.

Now since this works, I’d like to take it a step further. Is there a way to disable the switch, only in the off position?

No option to change an item’s State under #2

Can send a command, but not what im trying to accomplish

Sorry Rich, I didn’t scroll all the way down…

What do you mean by “disable the switch”? You can hide the Item on your sitemap so based on it’s or some other Item’s state a read only Text element or nothing is shown when ON and a Switch element is shown when it’s ON.

Beyond that, there is no way to disable an Item. It’s there or it’s not.

But, essentially…If a device is off, and cannot be turned back on through the system, only manually…It would be nice to disable the switch on the UI…Not hide it, because it is still a visual aid to see that the TV is off

This is how you disable a switch in sitemaps.

Alternatively, present the switch in asitemap, but disable autoupdate on the Item. If a linked channel never reports “ON”, you can poke at the UI switch all you like but it will not remain ON.

Thanks for the insight guys…