Value for an equipment in the semantic model

In my semantic model, I have added various groups representing the locations around my home, and inside those I have added the equipment that is installed in each room. Below that, there are points/switches… representing the various channels on each and every item, like this for instance: 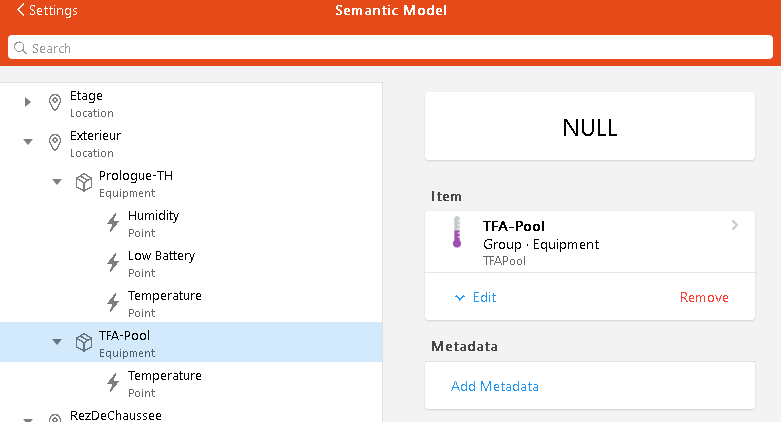 This works fine and is quite logical, but what I find sometimes annoying is that I need to go down to the point/switch level to see the associated value, when the equipment shows NULL.
I totally understand that an equipment is a “logical” group that can have multiple children beneath it among which it cannot choose automatically a value to display.
But what if there is only one? Shouldn’t it show the value of its only child?
And if there are multiple ones, would there be a way to tell which one to pick its value from?

I have seen the State description metadata which appears promising, but I don’t see how I can tell it “use the value from point XX”.
I don’t mind using a bit of scripting if need be, it’s just that from the documentation I don’t see a way to do that in Pattern

For reference this is the version I’m using:

A semantic ‘equipment’ is just an Item of type Group with a fancy tag.

Groups have states like all Items, but set in a special way - you can set an “aggregation function” which derives the Group state from its members. That’s what you need to look into.

I don’t see how I can tell it “use the value from point XX”.

You can’t, there is no aggregation for that.

But if you want this just for presentation purposes, it sounds like a job for a custom card.

Create own function to update state of Group Items & Sitemaps

Platform information: Hardware: Raspberry pi OS: openhabian Java Runtime Environment: 11 openHAB version: 3.3.0 Issue of the topic: I have several items for current temperature, humidity and target temperature. I have the group gThermostat that includes all of the above. In all UIs, the thermostat group shows with its label and a NULL. I guess that’s the state of the item, which is undef because I didn’t define an item type nor a function. I’d like to define the item-type of group gThermo…

you can set an “aggregation function” which derives the Group state from its members. That’s what you need to look into

Thanks, that’s indeed useful. Well, it could be done automatically when there is only one subitem, but it’s easy to do as well.

I don’t see how I can tell it “use the value from point XX”.

You can’t, there is no aggregation for that.

That’s too bad. Would it be useful if I created a feature request to add such a function?