Any recommendation for the android version I need at least for OH2 and Habpanel?

and the habpanel widget states are updated flawlessly?

Yes, no problems with that.
Currently I have HABpanel running with standard and custom widgets on an old, rooted Samsung Tab 2 with Lineage OS (Android 6.0).
I’m using Fully Kiosk Browser, the front cam turns the screen on when motion is detected. Nice feature

Make sure you get one with the correct orientation for your tablet so the cable part of the connector goes to the back of the tablet and not the front.

I didn’t use the inductive charging. I ripped that bit off and wired the QI connector cable to a power brick hidden in the wall.

Thanks.
I gonna try that.
Actually I like that the Fully Kiosk app has an API where I can switch the screen on / off by presence or night mode

I have seen this, but hoped that kind of cable would be available without soldering it myself.

You may also think about POE if available in your network (and a POE cabable tablet) or a wall mounted 5V pwr supply (that is what I have choosen).
https://www.conrad.de/de/acdc-einbaunetzteil-tracopower-tiw-06-105-5-vdc-1-a-5-w-512632.html (maybe those are availabe cheaper at other places)

I have PoE available for some IP cams, but no cable in the location where I would like to place the tablet.
I will check out Conrad. Fortunately there is a store in my city

I will check out Conrad.

Additional info: that 5V/1A pwr supply will NOT work if you intend to keep your screen always on, it will drain the battery even if always plugged in. For that scenario you will need at least a 5V/2A pwr supply.
But for any kiosk browser or application which will turn the screen off it is just fine.

Hi @sihui
Thank you for the suggestion.
I will check for a 2A version then.

One more thing.
I would like to use a very compact plug of a Qi charger.
Will this be able to stand the 2A charging power?
(The original charger provides 1A only)

use a very compact plug of a Qi charger.

You will need to find the specs for that plug to get a reliable answer.

Its specs look the same:
5 V @ 1A
So it should be a good match for my tablet.

I guess I need to check out power consumption depending on screen brightness if 1 A is sufficient.

This is how I did wireles charging on cheap lenovo tablet. I opened it and solder the module directly to usb

and positioned 6 earth magnets (1mm thin from ebay) in the cover of the tablet (keep good distance between charging module, it can interfere). And put the magnets on the charging board 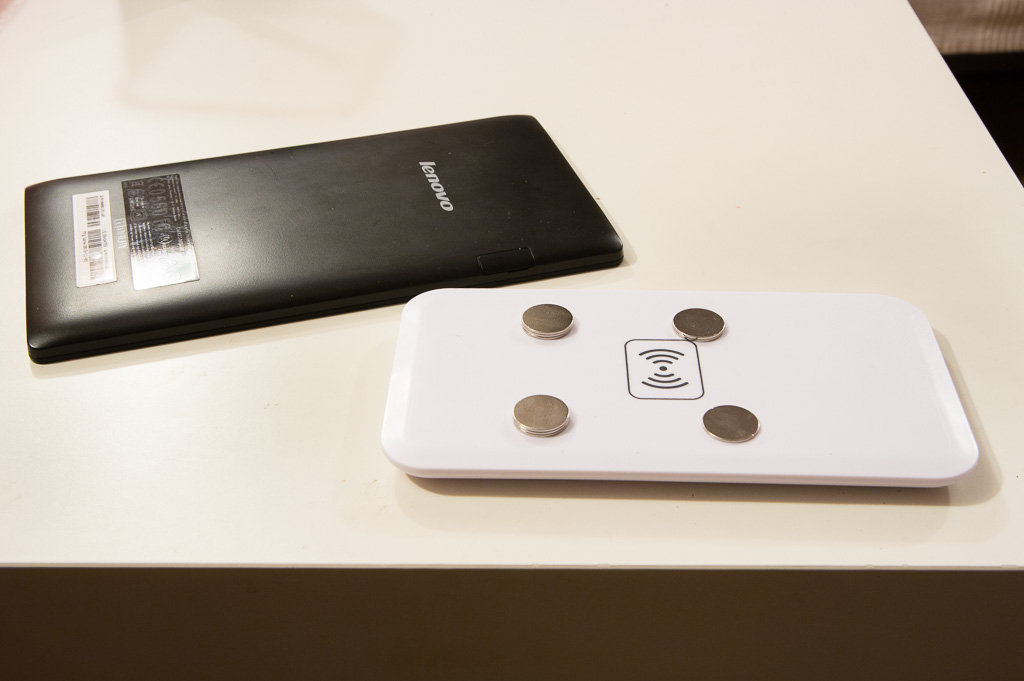 On the photo you can see magnets from outside, but there are magnets inside as well, increasing the magnets strength. But they hold tablet with no problem at all. Then I mounted the base on the wall. 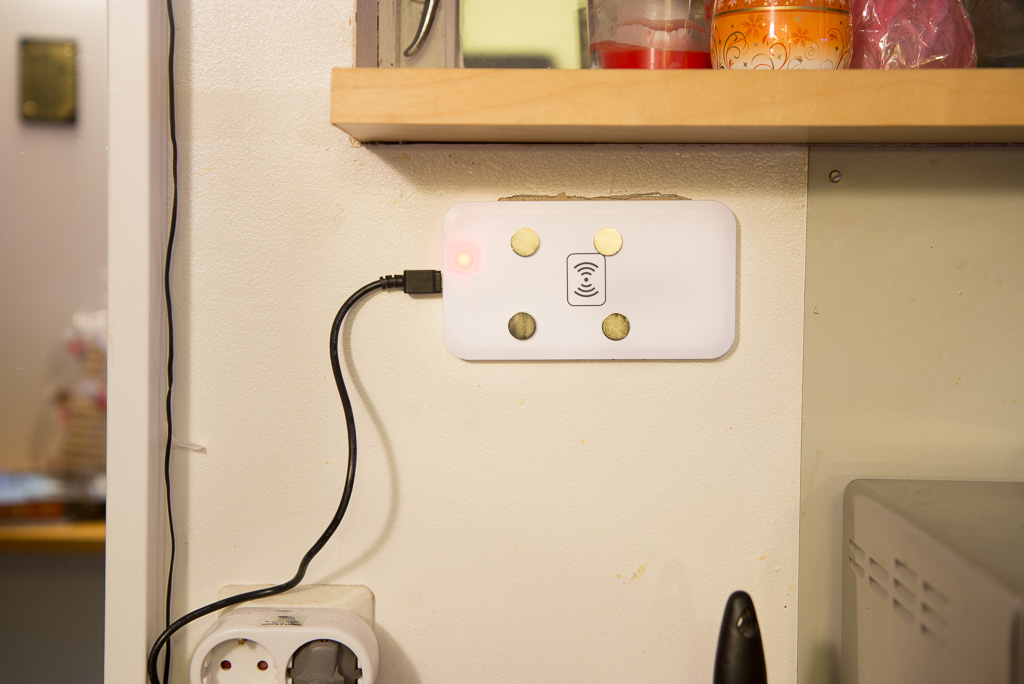 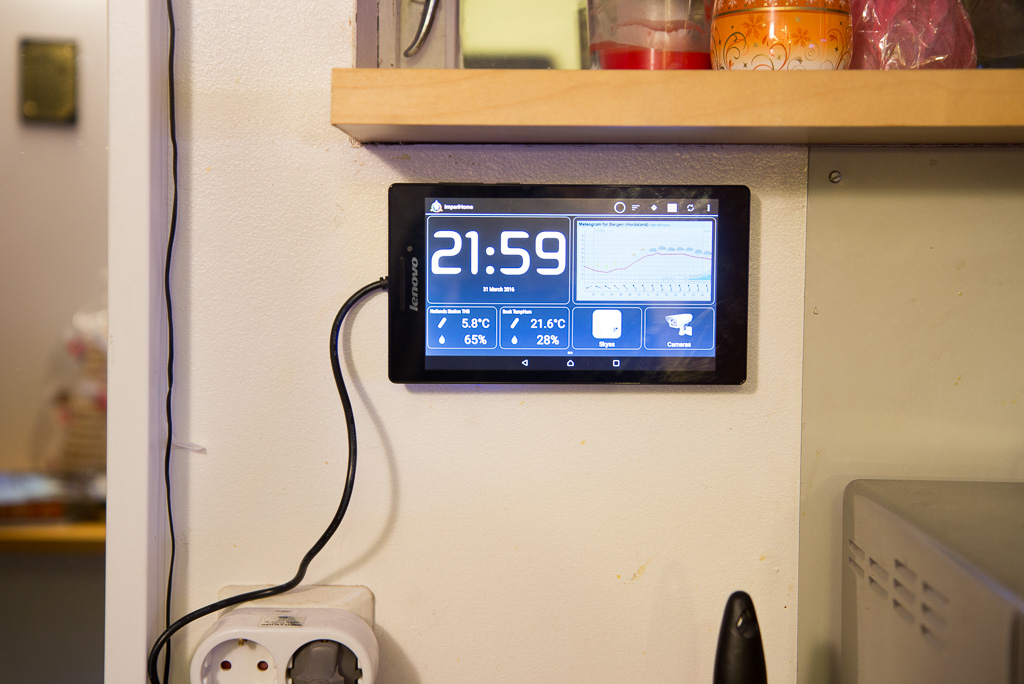 One advantage is that you can now mount tablet anywhere you can mount the tablets, thus reusing the tablet around the house, like for looking at the recipes 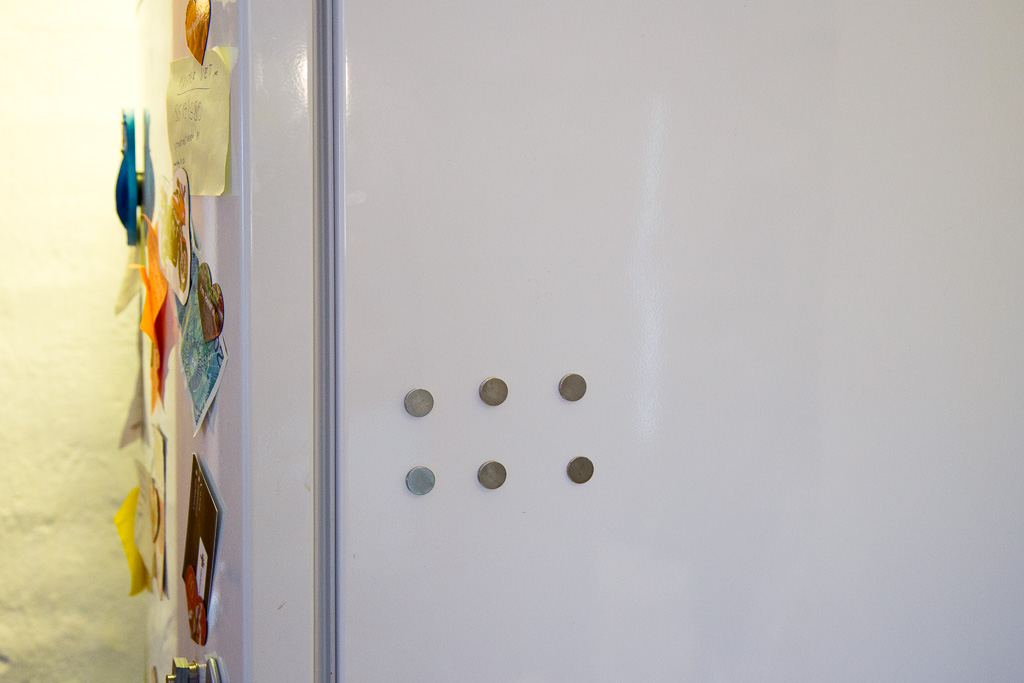 charging module is the cheapest one from ebay, speed doesn’t matter as tablet is 95% of the time mounted on the charger. It also has some nice tasker profiles that will automatically switch to imperihome when connected to charger, it uses the camera as motion sensor and reports motion to OH, also turns off the screen if no motion is detected etc. Can reset itself, can reset camera motion app with autonotificaiton and autoinput and other plugins

Good solution I did the same however with Lenovo Tab2 a10-70 10" but instead of soldering QI receiver I used dedicated case, cut off front cover and placed receiver on the back of the tablet. Since it is 10" there is an issue with QI charging efficiency. For example QI charger does not keep up with charging the tablet when I put MJPEG stream as the half or full screen picture in HABpanel.
The charger on the screen is very cheap and simple to open (I have the same model) and you can easily put magnets inside and fixing them using strong adhesive tape.
Also for 10" tablet you need to use twice stronger magnets.

Do you have any link bo buy the additional qi charger you’ve included ?
Any difficulties to a) open the tablet and b) close it again with the various additions (charger, magnets) ?

(remark : i had a low priced lenovo tablet (A-40), it stopped working after one year …)

The charger is the cheapest from ebay or banggood/dx.com, dont’ have the link but it was not some special model, just search for similar looking one. To open a tablet I used plastic tools for phone repair or whatever it is called on ebay. But any sharp plastic will work fine. It is a cheap tablet thought, I am sure some of the more expensive could be more challenging to open, this one worked fine. I tried first with one samsung tablet, but that could not be just plugged to 5v, needed special cable with resistors and several pins connected at once, so I just sold that samsung and purchased lenovo (it is important to have mini or micro usb charger, not some fancy 15pin or something).
Regarding the magents, I purchased some thinnest magnets that are ~16mm in diameter. If you buy the thinnest magnets you can always stack two of them if there is space. I could stack two on the lower side where is battery, but only one on the top side. Magnets are very strong anyway, so if needed you can always stack few more on the charger side.

To position them I just used thin double tape and glued them on the case, closed the tablet and then aligned it with the charger, here it is a bit tricky to find the position where tablet is charging fine (as it takes 1-2s for confirmation) and then just allow cover magnets to snap in place. Test as much as possible (consider the gravity as well) before assembling all, as it is very easy to missalign the charger modules, few times I had it assembled and it would fall down just a millimeter and tablet would stop charging. That is very annoying, especially if it starts making the “plunk” sound when it starts/stops charging.
Easiest to adjust charging is by opening the charging plate and moving the coil inside it a few millimeters and then holding the tablet in the air to test. Best is to try to move tablet a few millimeters up and down to see if it is in the range of the charger.

Other then that, it worked fine for 2 years as a clock and dashboard, but then the baby got the hands on it and apparently the screen is not stronger then the floor

Next one will most likely be the same design, but a 8 or 10’’ model, as 7 is just too small for any application.

It is a dedicated tablet as a clock/dashboard, but I think it is not difficult to get it portable and thus still using it as regular tablet when convenient, so why not.