Z-Wave Binding | is the Qubino Flush Dimmer not in the Database?

i try to include a qubino flush dimmer but it is included as unkonown. I am a litte confused because another one is working fine and is fully included.

The only differences I can find ist the labeling on the devices:

Do I need to update the z-wave Database because my device is a new version and is it still not in the Database?

i can change the Database on the Webpage: https://www.cd-jackson.com and I need a log in and after that an access to the Database. that´s what i´ve understood so far.

and which information do I need to update the Flush Dimmer in the Database, I have only the Information out oft the XML File. But I think I need other information.

how does the z-wave binding syndicate the information oft the device and the Database.

Thank you so far

does the Z-wave binding use an online Database?

No, the database is compiled into the zwave binding jar file.

You need the xml file and the device manual.

It’s not a new version, it is just not yet recognized.

means the device did not send any data (or the controller did not receive any data).
Maybe that is a range issue or you did not include the device properly.
As soon as you have valid data for manufacturer, device type and device id and it is still unknown you need to check the database it the device is present.

Thank you for your fast response

So there should be no range problem the device is lying next to my controller and notebook.

My set up till now:

I included the devices all in the same way and I also tried to exlcude and reincluded them.

And I also did a factory reset an included them after nothing had worked.

I added the log file for you and it would be awesome if somebody could help me.

If the logs oft Node 10 are confusing: I tried to copy the xml File oft the Node 7 and renamed it to Node 10. 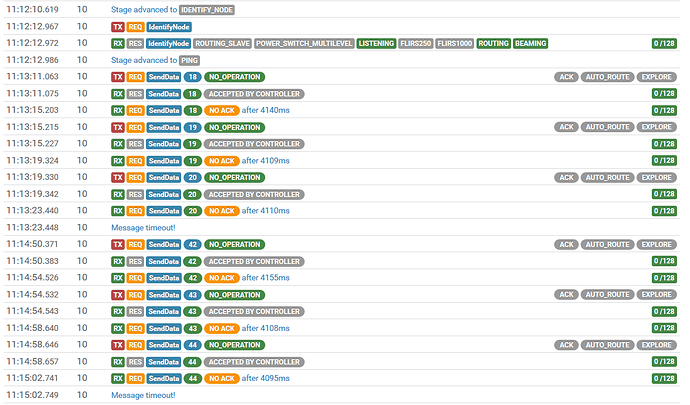 As you can see the device does not work, it gets timeouts, probably because:

I tried to copy the xml File oft the Node 7 and renamed it to Node 10.

that won’t work: if the device is not sending data and no xml file is generated after inclusion/initialization, you are out of luck.
Also please make sure you are on a recent 2.5 zwave snapshot binding.

thank you for your support, but it is still not working !

Does sombebody still have an idea what to do?

Delete the xml, factory reset the device, reinclude the device.

From the short log I see above, the device is simply not responding - there are NO responses from the device at all.

Either there is a range issue (you say not), or maybe the device has not included properly - either way, it is not communicating and it should be reset (ie excluded) and reincluded.

Thank you so much guy,