I thought the Home Id of the controller is part of the Frame Data?

Thank you again for the clarification, now I understand.
However, if you should have an idea how to provide some kind of tag in the logs I would highly appreciate it

@chris: I noticed one more thing today when using multiple controllers. If I want to include new devices via Habmin how can I control which of the controllers should go into inlcusion mode? At the moment are they all starting inlcusion at the same time and the quickest one wins?
I have 2 controllers with 2 different Home-Ids for ground floor and first floor at the moment. So I would like to only put the ground floor controller into inclusion mode when I want to include a new device on ground floor. Otherwise I might risk to have the device included in the wrong network. Is there any possibility to control this at the moment?

Unfortunately this is a problem with ESH and the changes would need to be made there. I agree that this is an issue though - I have the same problem with other bindings at the moment.

was the last issue about inclusion address as far as your aware? as there been any issues or updates to enhance using dual controllers in your later zwave bindings?

I have issues i think only two controllers will resolve

It should be no problem to use multiple controllers within the binding and I believe others are doing this.

Thanks Chris. Has there been any development on dual controllers?

Has there been any development on dual controllers?

What functions are you looking to have developed?

Hi Chris, nothing specifically im just trying to determine if having two, is no different to having one and that there are no known issues.

I cannot solve my zwave issue so Ill be forced to have 1 controller connected to OH2 with a bunch of zwave devices and then another, linked via the IP Serial link to the home which has about 10 zwave devices.

The binding should work fine with multiple controllers - it was designed to do this. That said, you would need a USB extender or something to separate the two controllers, or there will be no benefit.

here is a diagram of my setup.

I have to move my router/oh2 server (Its a Cisco UCS blade inside a Cisco 3945 router) into the garage. In doing so, the OH2 server will be quite far from the Zwave devices in the house.

Currently the server/Zwave stick is in the house and operates the zwave devices just fine - including the Aeotec multisensor in the garage however the Aeotec Dimmer 2 just left of the Multisensor fails to operate reliabiliy. I suspect the Tree is blocking some of the signal.

I am proposing to have a zwave aeotec stick inside the house, connected to a Ubuntu media server ive got that will operate the existing 10-15 home zwave devices and then move the OH2 server up into the garage to operate the few devices up there.

The house/garage are connected via a redundant Single mode fibre at 10Gbit, inside the garage and house are Cisco Gigabit switches that all the devices are sitting on.

Node 17 is the Aeotec dimmer at the end of the house which is outside and sits under the Eave (roof overhang), Node 16 is the Aeotec Dimmer in the garage. Node 15 is the garage multisensor 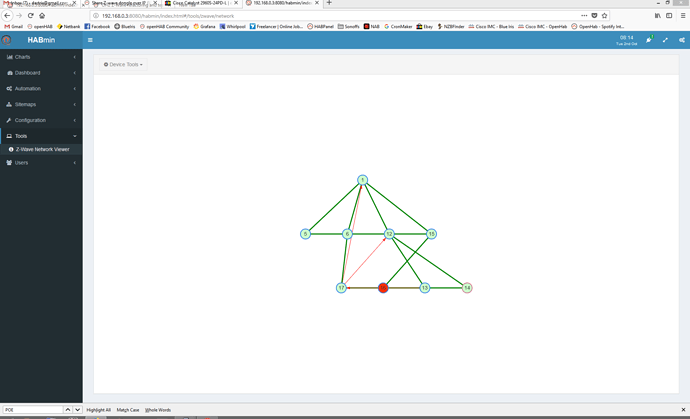 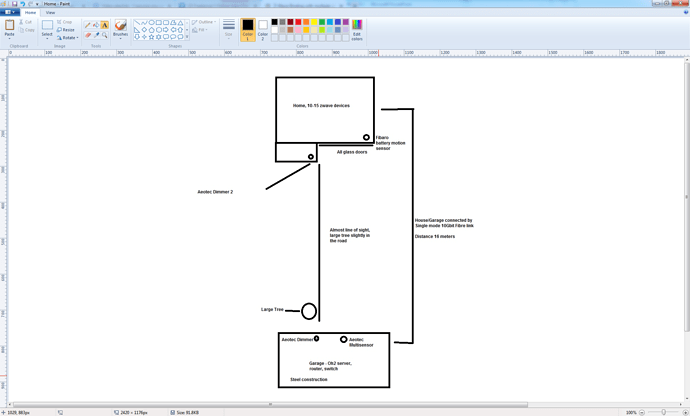 Hi Chris, nothing specifically im just trying to determine if having two, is no different to having one and that there are no known issues.

The binding works fine with multiple controllers. I have 3 controllers running with the binding since more than a year and a total of 126 Z-Wave nodes in the 3 networks.
There are 2 things I am missing:

However these points are of minor importance and the binding performs really smooth with that setup.
And as far as I know, this feature of multi controller support for Z-Wave is not supported by many home automation systems (is there any other than OH2?). So I consider it a really great feature!

This is an issue with ESH which only allows discovery to be enabled per binding, and not per bridge.

Issue: Discovery should be able to activate per bridge, not per binding

I guess I could try and implement something non-standard, but it feels a bit wrong.

. I do agree though - this would be useful (somehow) so feel free to add an issue for this - I don’t promise to add it (at least not soon) but it’s worth logging it I think.

So I consider it a really great feature!

I have to say thanks for all the work you put into that great binding!

hi vossivossi, was this ever setup to allow multiple controllers with the logging aspects?

To my knowledge the logs only show the node number, not the network ID. So if you have the same node number in more than one Z-Wave net the log analysis is a bit more cumbersome.

Sorry for reviving an old thread, but was there ever any success with this? I’m planning a change of controller (using OH 3.0) which means I’ll have double controllers in a transition period. And there will be much excluding/including of devices (moving them from one controller to the other) which will surely be a pain in the ass if I can’t control which of the controllers are put into inclusion mode…