This specific thing is a NorthQ Electrical Power Meter Reader NQ-9021. Maybe there is a way to get updates more often in another way? 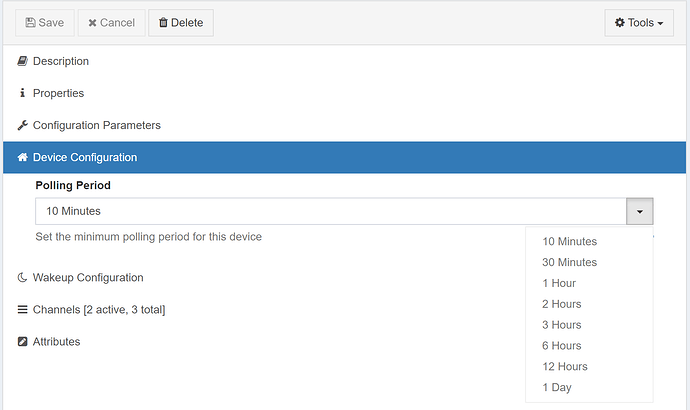 I am not able to select or enter anything lower than 10 minutes in HABmin.

Really? You should be able to set it as low as 15 seconds - what happens when you try this?

I thought the NorthQ meters supported associations and could therefore send the data unsolicited which is always the preferred method.

@henrik: Please try to enter a value directly for the polling period in seconds e.g. 300

@chris: I have the same device - and indeed it does not support associations and therefore can not send the data unsolicited. You can just poll it regularly.

Nice, just entering “60” works well. I tried “1 Minutes” (like the dropdown) etc but did not work.

And sadly yes, it does not support association groups.

Is there a possibility to set the polling time for all devices?

I don’t think there’s a global way to do this - it’s not recommended to use polling in general. What we’ve seen in the past is people don’t understand this, and they add polling on everything and wonder why the network has problems.

When I use the habmin gui I polling is automatically set on every thing/channel to 30mins.
I want to change the time for all my devices to a much higher value.
Unfortunately when clicking on a thing there is a significant load period.
Having to do this for ~30 items is really annoying.
Would it be possible to create some configuration and then apply it to all things?

Would it be possible to create some configuration and then apply it to all things?

It’s possible to do, but not something that is currently possible and not really something I want to do.

My opinion is that polling should not be used as a general rule. The problem is that it is not required, and people tend to increase it to high levels, and then generate bug reports when things don’t work properly due to the high network volume.

I think unless you have some very old devices that don’t support unsolicited sending of data, you shouldn’t use “a much higher volume”.

Why do you actually want to do this?

I think unless you have some very old devices that don’t support unsolicited sending of data, you shouldn’t use “a much higher volume”.

Higher Poll time means lower network load.
The 30mins default is way to frequent for my needs.
Normally I use 4 - 12h and only for values that get not updated frequently (e.g. energy counter from devices that are mostly off).
I understand that channel specific polling is not possible. Is there a technical reason?

I understand that channel specific polling is not possible. Is there a technical reason?

Currently channels are polled so I’m not 100% sure I understand your point. I guess you mean if the configuration can be set per channel? This would of course mean that every channel would need to have this configuration, so instead of it being set per thing, it would be per channel - I thought you wanted it for the whole network

Currently we only poll channels that are actually linked to items.

The reason 30 minutes was chosen was to allow the system to know if devices went offline at a reasonably timeliness - if we don’t poll anything, then you don’t know if the device is still working until you go to use it… We could possibly make it slower, but even if you had 200 nodes, each with 10 channels to poll, that’s still only around 1 poll per second over 30 minutes so not exactly an overloaded network and I think that 2000 channels is a reasonably extreme zwave network…

The bottom line is at the moment it’s not possible to do what you want, and currently it’s not something I would plan to change right now as there’s plenty of other things to look at. At some stage I could look to add this global setting - when I get a few ‘spare’ minutes

Currently channels are polled so I’m not 100% sure I understand your point.

As you guessed correctly I meant channel specific poll time.
Almost all of my devices do report their values automatically (via configurable interval) so from my point of view there is very little need for polling. That’s why I want to increase the poll time because it just is not necessary.
Or will values only be polled when there was no update in the defined time from the thing/channel?
What about Alarm channels? Can they actually be polled?

from my point of view there is very little need for polling.

I agree, but as said, if you never poll, then you will never know if the device fails if it’s not used for a while.

it just is not necessary.

It’s not necessary with respect to updating the data maybe, but as above, to make sure that the network is still working, it is necessary I think. Also, just because it’s not necessary doesn’t mean it hurts - call it a network management feature if you like…

What about Alarm channels? Can they actually be polled?

Yes, alarm channels have a status and can be polled. There is some data (eg notifications) that can’t be polled, but that’s another story.

Okay - I think I have a better understanding now. Thank’s for your quick reply!