I am fairly new, have gotten a system operational for handling lights/plugs/the easy stuff. SMOKE ALARM (zCOMBO) will be the end of me. Trying to troubleshoot but am stymied. I have the Z-wave controller operational. The ZCOMBO finally did show up with its channels (this was a major). However, I am getting no alert coming in on the smoke alarm channel. I manually turned it on by writing a rule, it did set on and triggered the appropriate telegram message that the alarm came on. However, the state on the channels are all NULL, even when the smoke alarm is triggered with smoke. No idea of what I may have missed. I would also like to interrogate the battery level but am also unclear as to how to do this.

I did look in the openHAB log and see the state changed by my rule but nothing shows up when real smoke happens…so I must have something crosswired (or not wired). Any assistance would be greatly appreciated. I am sure I missed something…

Rpi 4, Aeotec 5 stick for Z-Wave, Debian, Zcombo alarm. Nothing unusual or complex in the set up.

Possibly still not completely initialized. do you have the option on the UI page to “Reinitialize device”?

If not need to wake until you get that.

I do not have the option. “Waking up” the smoke detector is a bit flakey — I will repeatedly try it to see if that helps.

Update…I finally restarted the controller stick, after which it came out of the “initializing” mode and all looks fine with it, although all the channels are still either null or show the value I pushed into them. I still do not have the “Reintialise the device” option though. Is there any way for me to see if it is properly communicating smoke alarms without the old 'burn some paper" trick?

I do not know if it is related or not, but I have a simple camera with motion alerts on it and it also does not raise alerts. Is there a base setting for alerts that I may have missed?

You could try the setting the zwave binding to Debug and try to wake. Could provide clues. Sometimes channels on battery devices are null until they get either OK or alarm. I would start with a debug and wake. Do not have the device. Is there a test button?

Thank you so much for assisting.
There is a test button, it sounds an alarm but never shows in HAB.
I do not know how to turn on debug – I would happily do that. Would you send me guidance on how to do it? I looked at the thing, didn’t see any way there…
Thanks again.

Should read this about zwave. At the end is a section on if things do not go as planned.
Console is reached via ssh as sudo openhab-cli console

i triedsudo openhab-cli info and discovered the the URLS are wrong. When I had originally set up the RPi, I had set a static ip, which I subsequently discovered was not what I wanted. I changed it and all is working fine (I think) but I saw this and am concerned that it will cause problems. After chasing down that rabbit hole looking for ways to fix it (or if it is even necessary), I checked the .conf file but it isn't set there. Any suggestions?

I’m afraid I do not understand. You can’t get to the console to set the binding to debug?
edit: maybe this picture will help. first passwords are yours. Console psw is habopen. 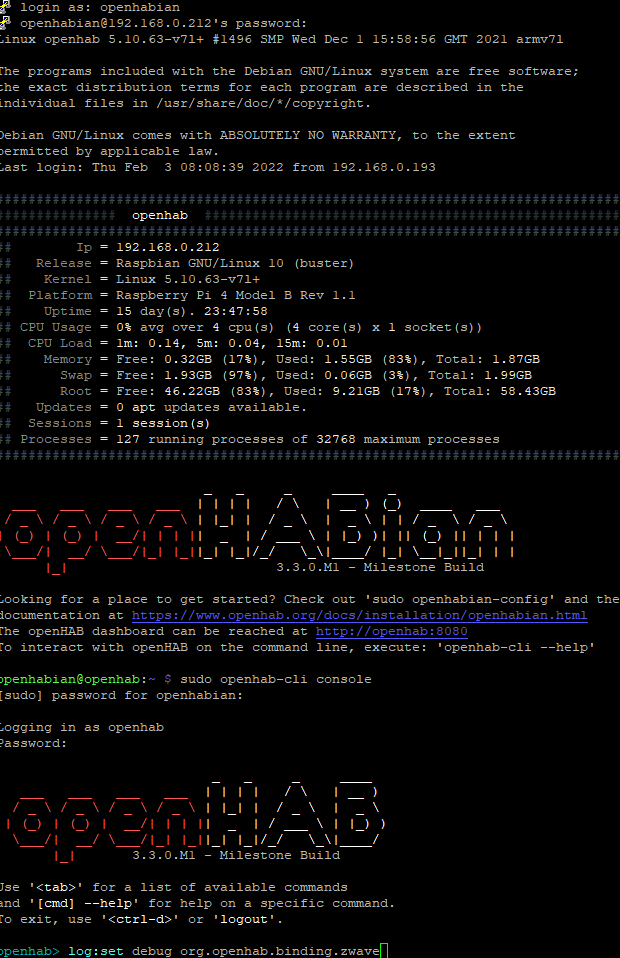