Yesterday I updated openhab to version 2.5.1 stable.
Since the update my aqara sensors are not working any longer, but other zigbee devices are working fine.
I haven’t tried to re-discover the devices yet.
Please can somebody give some advice how to solve the problem.

Openhab is running on PI4 with Openhabian image.
CC2531 Dongle is used.

In the past, it helped for me to put the zigbee binding in disovery mode (to find new devices), then long-press the button on the aqara sensor until the led flashes and then short-press the button several times.

Usually this helped to bring them back. I did not have to completely delete / rediscover them.

I tried the same, but the device is still offline.
So what I’ve done in the last test.

Attached the log file from that moment I’ve put the binding in discovery mode:
openhab_2.5.1Discovery.log (149.2 KB)

Hello!
I have the same configuration.
I had the same problem. I rolled back openhab to version 2.5.0 and my Acara ZigBee worked again. Rollback can be done in apt or aptitude, and then you can freeze these packages from updating.
Of course, this does not solve the problem completely, but at least it will restore working capacity.

Hi,
for those how are interested in that topic. My original problem is not solved, but I switched to an Ember based Zigbee Dongle (Bitron Video) and now all my devices are working fine.

unfortunately I need to revert my last post. Even with an Ember based Dongle my setup is not working as expected.
Sometimes the dongle itself was “offline - connection error”, sometimes a device was “offline - gone”

I have decided to upgrade to the latest version to avoid any bugs that have already been fixed.
So my current setup is as follows:
Openhab 2.5.2
Dongle: Bitron Video (Ember)
Zigbee Version: Snapshot updated today (27.02.2020) 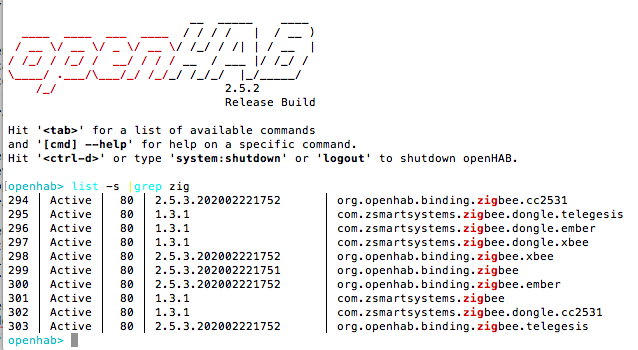 I have two Innr Smart Plugs which are working fine.
The Aqara devices are found by the binding, but the things is: Offline - Node has not completed discovery.
I am aware that the Aqara devices are not Zigbee standard devices and that they go into sleep mode very quickly.

I would like to understand a little more about the process of “adding a device”. I know there are two important times

In the past, it helped for me to put the zigbee binding in disovery mode (to find new devices), then long-press the button on the aqara sensor until the led flashes and then short-press the button several times.
Usually this helped to bring them back. I did not have to completely delete / rediscover them.

I guess Chris explained already somewhere in the forum how to read the DEBUG log. What are the steps that need to happen in which sequence? If so, where to find it?

I found the following thread in the forum, which looks very similar:

Pi3B, OH2.5 After I updated to OH 2.5 my Aqara sensor stopped working. The odd thing is that whenever I click discover items, it always finds the sensor as unknown Zigbee device, even more weird is that when I take out the battery from the device it still finds it and even if I disconnect the C2531 dongle it still shows up. Tried to clear cache, reinstall Zigbee binding neither worked, any suggestion?

My setup is working for a few weeks now without any issues.
In the end it worked after I’ve deleted everything and started again from the scratch. That means: