I’m trying to make my tradfri and Trust Smart remote control work with my openhab 2.5M with a cc2531. As I see in another post the Philips hue remote, which is very similar to the Trust physically, creates the controller channels in paper UI to be then used or assigned to items.

In my case the tradfri and Trust remote are detected and linked ,and in the case of the Tradfri I see the battery channels and a switch channel, but when I assigned it to an item and I push the button nothing happens. I think misconfigure something there. Any advice here?

In the trust case is worse as it only shows a channel called level control and the controller appears to not be identified by openhab, maybe is still not included?

I own too a Tradfri presence/movement PIR dectector, and is detected as a Switch but again it appears to be unusable. 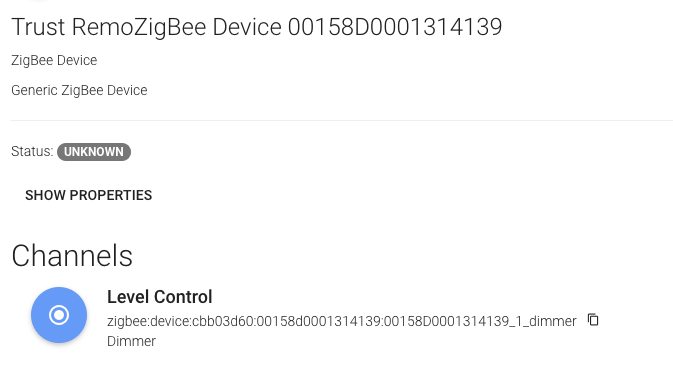 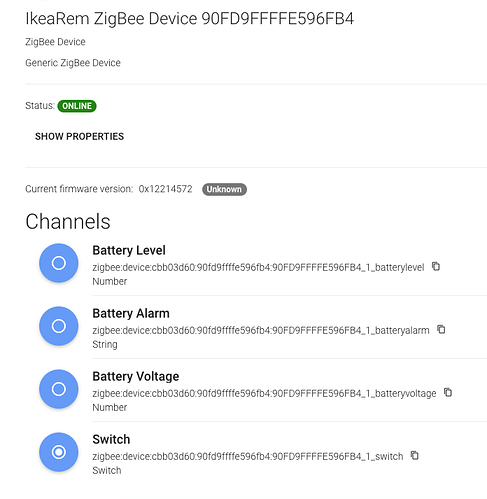 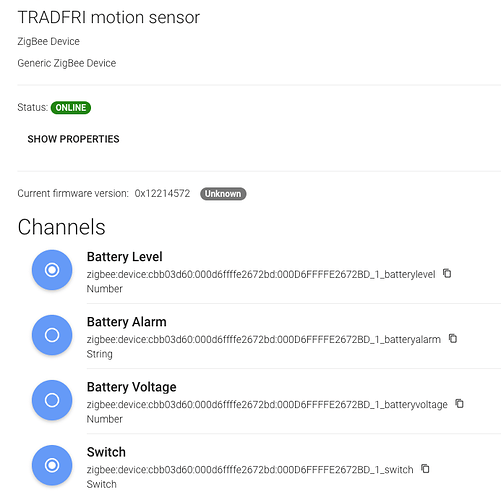 No one can help?

One month later no response

I guess no-one has this device to be able to help you.

I have the Tradfri remote (the round one with five buttons) and just joined it. It shows up as three channels: Level control, Battery voltage and Battery alarm (I would have expected color, level, on/off and battery). I enabled some further logging and pressed some of the buttons and I can see that the binding gets some more information… Inserting it in @chris log parser tells me that it receives messages with “Clusters” ON_OFF, LEVEL_CONTROL and COLOR_CONTROL. Not sure what that actually means though?
Pressing the level buttons does not seem to affect the Level control channel values.
(I noticed that I have a higher firmware version, 0x12223573, not sure what the difference is…)
tmplog.log (165.9 KB)

I suspect that this is reporting server side for these clusters, and colour control server is not something I think we have supported at this stage.

Not sure what you mean with this being reporting server side?
How do we add the color control? (I would love to help if I can)

How do we add the color control?

Ok, I get it! So what code is this in? The zigbee binding Java code itself, companion libs or something else?

Can’t argue with you on that one! But it would be interesting to have a look, too see if I could help out with a PR or two from time to time…

It’s the ZigBee binding. Unfortunately it’s quite a complicated converter since there are multiple clusters involved with providing these functions.