hello, I have a number of devices installed on my rpi4/oh3/zwave Aeontec Stick gen 5.
2 devices are fibaro ones (FGWP102/FGWP101)

I noticed that they are showing online despite the fact that i have unplugged them two days ago until i re-place them.

This would indicate a problem with the polls? 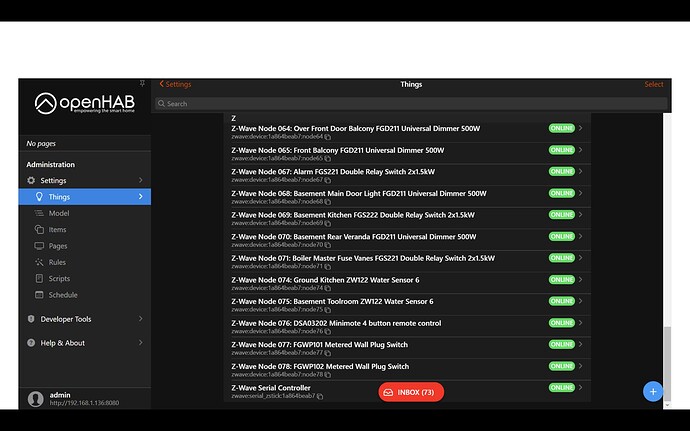 This would indicate a problem

Nope. Devices like smoke alarms might go to sleep for days, that doesn’t mean they are offline.
Related -

How to get notified about offline (non communicating) Z-wave sensors? Runtime

Hi, i have a Fibaro flood sensor with Aeotec USB Stick running with openhab3. Unfirtunately I noticed that the flood sensor was not reporting anything for several days (also no flood alarms when tested). Openhab showed the thing as online. This is something that I do not understand. The wake up interval was set to 21600 (6hrs), but the sensor was not communicating with the controller for several days - but still online. Shouldn’t openhab set the device as failed when a device is not communic…

Expire feature is purpose designed for this situation.

hi @rossko57 i also have flood sensors and they actually appear offline briefly so that isnt the problem. the case here is an active device not a passive one

the are shucko plugs (which also measure energy)

What do you expect to happen?
Or to put it another way, why would you expect openHAB to know that your devices have been taken away?

@rossko57 the wave zwave works is that it has a polling function. in my experience with a previous zwave controler if a device run out of batteries or became disconnected I got an alert that it was “offline”

so I assumed that the online function of Openhab has to do with some sort of polling/pingin of the device alive status. makes sense?

zwave works is that it has a polling function.

Polling is an anti-pattern for zwave, consuming limited network bandwidth, and useless for sleeping battery devices. Most traffic is autonomously initiated from the device end.

If you want to put in place your own"failed device" detection, you can.
openHAB cannot guess if a given device should report once a minute or once a week, or only report changes. But you know (or can find out) what you have configured.

so to better understand your point, what does the online/offline show for the zwave binding if not the device expected availability?

battery devices have a wakeup every x minutes. from my experience if they miss a few expected wakeups they appear offline.

Okeydoke, no polling then after all.

what does the online/offline show for the zwave binding

As per the thread I linked earlier

How to get notified about offline (non communicating) Z-wave sensors? Runtime

Periodic reminder that a Thing ONLINE/OFFLINE status is about the openHAB Thing, and not about any device it roughly models. Best viewed as indicating that the pathway to the device looks okay; e.g.in the case of a zwave device, if and when device decides to report to OH then OH is ready and able to receive the message. Users should implement other methods if needing a true device availability indicator.

If you want to implement failed node detection, you can.

thanks for the link will look over it!

Well, the binding has to work for other people apart from you, so it does not set Things offline just because they don’t speak up for a day or two. Some devices are designed to work that way.

Typically polling is not good for battery devices, or mains devices. For battery devices you generally can’t poll them as they are asleep anyway, and in all cases, polling causes a lot of unnecessary traffic and should be kept to a minimum.

Anyway, there is a bug in the binding at the moment about marking devices offline if they don’t report in and this is what you are seeing.