I have a couple devices from my previous system that are probably about 10 - 15 meter from the pi.

They are also in-wall switches/dimmers. They don’t lend themselves to moving for inclusion into the network.

I tried inclusion with a couple device placed between the z-stick and the wall switches.

Since they were included in another zwave network, I first tried to exclude, but got no indication that the exclude happened (either in the log or ui).

Figured it was worth a try, so attempted an inclusion. No indication there is a device being activated.

I also attempted disconnecting the z-stick and moving it close to the wall switch. It did not indicate that the removal worked, and also did nothing when attempting to include.

Am I going to be forced to move the pi?
(yeh, it’s small, but it’s also in an enclosure mounted to the wall, doable, just inconvenient…)

What Z-stick do you have, the Gen 2 or Gen 5? I think both have the blue light around the button that flashes so it probably doesn’t matter.

Did you see that when including/excluding the device when you took the controller to the switch/dimmer?

If not the problem isn’t the binding and moving to an RPi isn’t going to help. You are either not activating the controller or the device correctly or something else is going wrong.

The controller is a GEN5. 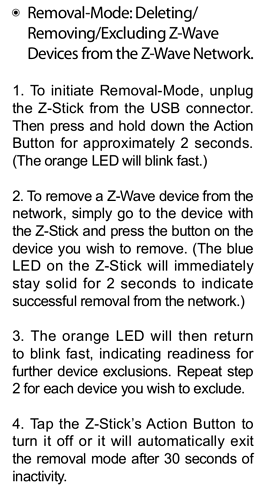 But I never see the 2 second blue led in step 2.

The devices (one switch and one dimmer) are Zooz in wall units.

I moved the device close to my pi and did the exclude in OH. Though the OH log didn’t give any indication of exclusion, I did an include and it found the device.

The device manufacturer number and type ID match what’s in the database, but it says the manufacturer is unidentified…but says it’s a ZEN24 dimmer which is correct.

You are not seeing anything because the dimmer/switch is not communicating with the controller. Until you see the light blink there really isn’t anything that can be seen or done from OH.

Finally gave up. Pulled the device from the wall. Wired a plug on it and moved it close to the pi and used OH to exclude/include.

But, that could be a PITA if I need to do it often.

You should only ever have to do that if your controller dies or gets corrupted and you do not have a backup of the controller to restore on its replacement (or are using a controller that doesn’t support backups like an Aeotec Gen 2).

This is the Aeotec Z-stick Gen5.

I have lots to learn…

So, how does one backup the Z-stick?

As for openhabian, I plan to just make periodic clones of the sd card.

You have to use a third party tool. I think Zensys is one of them. Search the forum and/or Google for “backup zwave controller” and you should find what you need.

Searching for “backup zwave controller” did find the Aeotec backup utility that only runs in windows. (Not too helpful for those who don’t have windows…)

There was info on other controllers and how to back them up as well.

It also found the thread in this forum discussing plans Chris had for implementing a backup function, but, the thread died a while back. I’m guessing he never implemented it.

I’m guessing he never implemented it.

No - it’s not currently implemented due to licensing issues. However, I believe I can work around these and it is on my radar once the development version is merged to master.