Zwave thing "unknown device" has no channels or parameters, how to proceed?

I have bought a “FIBARO WALLI CONTROLLER”, wich is just a 2 button controller. I want to use it to act as a switch for a TZ37 Double Relay Wall Switch wich is already working and controls 2 lights.

I successfully added the walli controller to my zwave network as a thing. Unfortunately it is not recognized by openHAB as it appears not to be in “the database”. As a user willing to contribute I took the XML from openhab and added it to the database on opensmarthouse (here). Now I think is will take some time to “approve” it before it can be recognized as such a device.

Anyways there are numerous “command classes” but no channels on how to “link” the buttons with the existing switch. There are also no parameters, but the manual of the walli controller speaks of setting “parameter 20”.

I would love to get some help on how to continue to configure the buttons to do what I want.

There are no configuration parameters or association groups. Usually they are listed in the manual. Unfortunately the Z-Wave NIF does not have all the information needed by OH.

Section 8 appears to have the Association Groups but we do not need that much detail. Group 1 should have Controller set to True.

Section 9 appears to have the configuration parameters.

I would love to get some help on how to continue to configure the buttons to do what I want.

I think you would use Scene Number cannel linked to an Item & then Rules. I have not used Z-Wave Scenes but have a different remote switch with Scenes that i want to use.

The remainder of the process is still evolving in my personal opinion. What version of OH are you running?

Basically, after the database entry is approved, the database gets periodically (usually once a week or more often) exported to GitHub. The updates can then be picked up by the automated snapshot builds for the binding…

Ideally, you then manually install the snapshot version of the binding to get the device recognized.

Thank you for the reply!

I will add the parameters from the manual to the database and I will just wait for about a week and see what I need to do to get it recognized within Openhab. I use openHAB 3.0.2 as docker container (image openhab/openhab) and am sure I’ll manage.

I have about 28 things connected (both zwave and other protocols) and use some rules to do stuff so if I get that little push I tink I will be able to figure out the rest. Will start searching and reading up on scene number channels, since I have no experience there.

So silly how a button is just a button, therefore no switch and a totally different approach is needed. Thought it would be easy. Thankfull for giving me a nudge in the right direction.

I am not sure on the binding update situation for OH 3.0.x since the 3.1.x SNAPSHOTS are not compatible.

Ok I will upgrade to a newer version before I continue next week. Do I need to search somewhere within github if the device is already added to the snapshot so I know I can continue? Can you perhaps point me to where I should look?

Just ping me here & I can check for you. I can look some places you cannot

How awesome and fast community! In less then a day I registered to be able to submit things to add to the database, and all what hads happened since:

Shoutout to all contributers, especially @Bruce_Osborne. Will continue my journey with confidence!

Well, it is done. Probably not the most efficient way to do this but it works. For future reference I’ll put my solution here:

What I first tried was to simply “link” the buttons to other zwave devices. This should be possible by setting some “Configuration Parameters” on the thing, as seen in below screenshot: 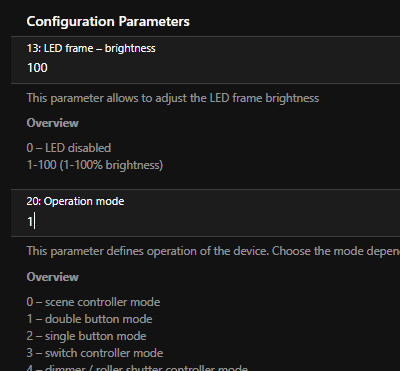 Then associating the buttons at association groups, as seen in below screenshot:

important notice: Don’t forget to save at the top right within Openhab

This should set the changes to “pending”. Now on the button send a wake-up signal so it will configure the thing as set in Openhab. (the “pending” indication button will go away).

This should be able to do exactly what I want it to do. Unfortunately it didn’t. Somehow both endpoints got switched by any of the buttons instead of just one. When choosing seperate nodes this did work perfectly, so I had to figure out another way. The other way was using the channel (number) of the scene selection. But I saw in the web panel of openhab it just changed to 1 or 2, and double or tripple press was not registered… In the manual it says that a double press will change the value to either 1 or two and send a parameter (presses 2 or 3 times). I was not able to “catch” that in any way (searched a lot). But after inspecting the log files I found that the value of the number was not 1 or 2, but 1.0 or 2.0. and after double pressing the second number changed (so 1.3 and 2.3). This made me able to set up rules. Yay! Below rule is set to be able to use the button to switch light 1 on:

Since the original switch is also used to turn the switch on/off the state of the button needs to be re-initialized, so I chose to set it to 0 if the original switch is used. (becase if it already is 1.0, it will not change to 1.0 and not switch the light on anymore) I added a line to all rules to do this. Example to switch light 1 on the rule is now:

Anyways, I’m helped, maybe improve the code later to get it more “readable”, but for now it works and the wife will be happy ;).

The Association Groups , other than Group 1 Lifeline, are for enabling device-to-device control without OH. for instance, a Switch could control a Light without openHAB.

Thank you, I understand and it would be ok for me if it worked, however it didn’t and now I can use Openhab as controller and I learned a lot in the process