In our home we play music over chromecast audio devices, and usually use a google home to control such audio. But sometimes it can be hard for google to hear the operator because of interference from loud music, and then one needs to go looking for a mobile phone to turn down the music.

In order to combat this (admittedly first world) problem I have come up with a wireless volume dial that uses a Xiaomi tilt sensor.
In this example the tilt sensor integrated into a dial are used to make adjustments to the volume of a chromecast device, but in principle this could be used to adjust any item that takes a number input (dimmers, thermostats etc)

Hardware
On the hardware side I have selected the Xiaomi tilt sensor, available from the usual suspects at a reasonable price. Using this sensor a few pieces of hardware have to be stuck together, and a little code written. No soldering, no wires, Xiaomi has done all the hard work

From the top in the exploded view you see: 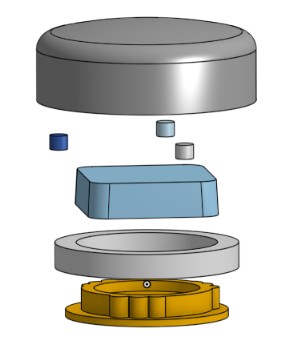 A CAD model can be found here. STL files are available pre generated, and you are free to make copies and modify as you see fit.

The dial has a pocket for the tilt sensor, and 3 pockets for the small magnets. The magnets fix the dial to the outer race of the bearing.
The sensor can be kept in place with doublesided tape. The magnets with CA glue.
A couple of features have been included that can be shaved off to make a nice fit with the bearing, to account for possible shrinkage. 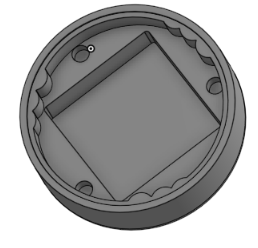 The bearing is fitted to the bottom plate and CA glued in place. A hole and a countersink are provided for mounting on a wall.

Code
In this example the input from the dial is used to adjust the volume of a chromecast device. It could be light dimmer, a color selector, or any other number type item.