NODE 83: Can not start heal as initialisation is not complete (VERSION).

which seems to be the issue.

I have also attached the raw logs.trisensor.txt (35.7 KB) 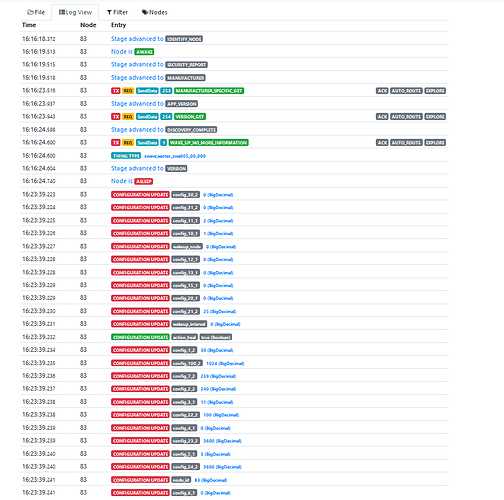 Note that I already woke up the device several times and I have already deleted and readded the device.

Would it be legitimate to patch the thing file to add the version?

PS: I have read all other threads on that device here

Thanks in advance
Stefan

That means the battery operated device has not responded with all the information from the NIF request as required by the Z-Wave specification. It is not unusual to need to wake up a device multiple times during discovery until it completes.

The binding needs the information from the NIF to know how to configure and respond to the device.

yeah, I know (and hate ) the request_nif issue. However, it seams it is not a request_nif here (you may check the debug logs - at least I don’t see it there). I scanned multiple times now while waking up the device with no success.

I thought the version piece was part of that. @chris would know for certain.

I hate the battery issue too.

I just got a Zooz Q-Sensor for North America and it was discovered very quickly. Perhaps the newer 700 Series battery devices complete discovery quicker.