I want to use Alexa routines as it allows me to say “I am leaving”. I don’t want to use Amazon routine mechanism as it is very limited. I want to trigger rule / script in Openhab.

The way I see to implement it is to define Routine switches, e.g.:

Define a rule ( (based on A simple scene management: finally a good use of scripts):

That uses the transform to map routine to script name:

And then I define the routine in Alexa app: 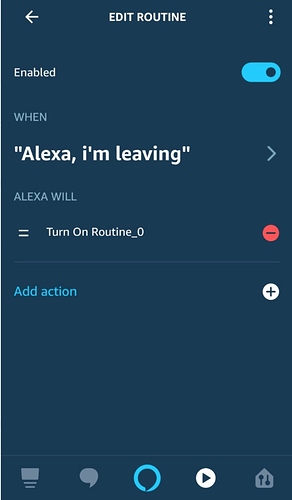 Is there a simple way to do it? correct way? other way?

But since your JS transform just does a mapping, why not just use the Map transform?

You could even drop the map and name the routine Item and script the same. Then you can use:

As a bonus the Items could end up with more meaningful names. I strongly recommend using meaningful names where ever possible so you can tell, just by looking at the name of the Item, that this Switch controls your “leaving” routine.

Yes, I can use the map transform. Just personal preference to use JS … (Is JS slower then MAP BTW?)

Yes, I can drop and call the script directly, but I didn’t want it this way as I am trying to decouple things, and using PROXY here seems to me more accurate.

The benefit of using patterned names, is that I don’t need to discover items every time I do a change or change Alexa routine.

I can agree with u about meaningful names, but in this case I assume documentation can replace it (assuming u document your code

And as usual, thx for your great feedback!

Just create a switch like you said then make your rule turn on / off the proper stuff when Alexa toggles the switch.

I do this right now. I have i’m Leaving as a routing in Alexa. My Alexa routine toggles my all lights master switch when I tell her I am leaving.

Not sure why you needs anything but a simple rule with some send command statement.

Create a rule for each routine I found the simplest.

Quite cool repository a awesome work!

Just one question regarding your 01_voicecommand.js:

I havn’t found any rules in your repo from this script is called.
Do you use another way to call this script?