then a cluster devices that i added but didn’t seem to work and i left in case they would work later. 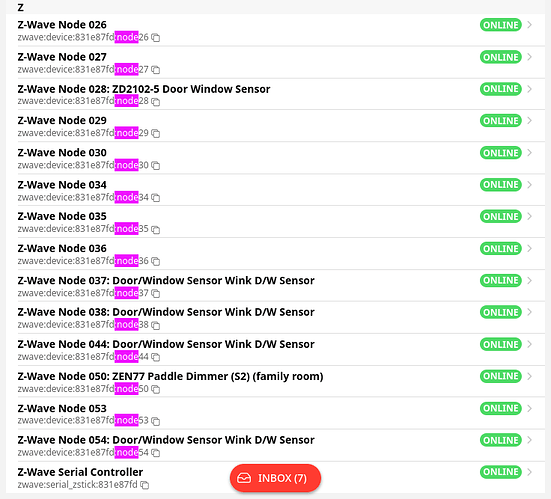 I did a soft reset of the controller, updated the tty device name and everything showed up as online but it’s still not sending out messages.

i recently updated the following:

actually as i was reviewing my settings, i noticed a lot of the notes are showing up as offline againt. i kept zwave logging on and i’ll try to run the logs through that log viewer to see if there is anything fun going on there.

for the laptop, are you suggesting to try to run openhab in debug mode locally?

for the laptop, are you suggesting to try to run openhab in debug mode locally?

no, if you have a windows pc, you can run the pc controller software to remove zombie nodes

The partial battery devices are not causing your problem because they are not involved in routing between other nodes. However if you upgrade to OH3.3 there were improvements in the initialization for battery devices. You will still have to manually wake the device a time or two, but it should complete. As noted above, waiting only works if the initialization has gotten to the point where the wakeup parameters have been set. That is why your wakeup change is not sticking.

Polling at 7200 is more likely to cause problems and not fix any.

Once you have the Silabs PC controller here is a zombie removal guide.
Z-Wave Zombies.pdf (571.9 KB)

thanks. i’m on linux and this seems related… Simplicity Studio - Silicon Labs

i’m installing it to see if it works.

i’ve ordered this and i’ll move things to this new controller and probably run it on docker from now on:

I physically inspected the usb dongle and its branded as Zooz but lsusb shows Aeotec, thought that might be interesting to some.