Openhab android app used about 7GB of cell traffic in one month.
About 4GB in last week. Any suggestions? 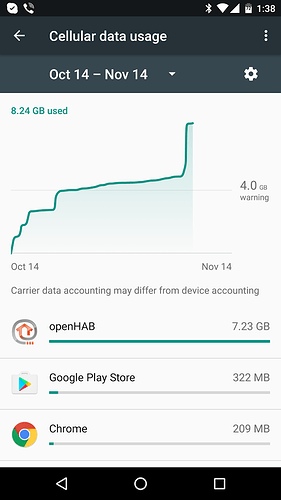 I have about 100K in one week … maybe your wifi setup when you are at home is faulty? But even if all traffic is going through cell it should not be that much …

WiFi connection is ok. In that case I would have lot of cell traffic in other apps.
On WiFi only 450MB.

Are you using it on Android 7?

On my Nexus 5x running android 7 openHAB data usage is very low. The app config and version number is identical. Both apps are used in the same way to control lights and heating in our house. The app is not left running, just opened then switches toggled.

Any ideas? Can I do some logging to work out what the app is doing with sooo much data!

Are you using it on Android 7?

Sorry, did not see your question.
No, not Android 7, Android 4.2