I have been searching extensively throughout the wiki and the forum for bindings and / or compatibility features of OpenHAB with Ankuoo devices, but haven’t found anything. Is there anything I am missing? I mean, is there any binding that can work with the Neo or the Neo Light Switch?

Thank you in advance for your comments!

It looks like these are wi-fi controlled relay switches, but either the vendor would have to publish API documentation, or some clever person could sniff packets (or someone already has) and see if there was a way to reverse engineer the communication over the network. Depending on what information is discovered, either

Dear watou, thank you very much for your reply. I wish I had the skills to develop the binding and share it with the openHAB community. Guess I’ll just have to forget about those devices for now. 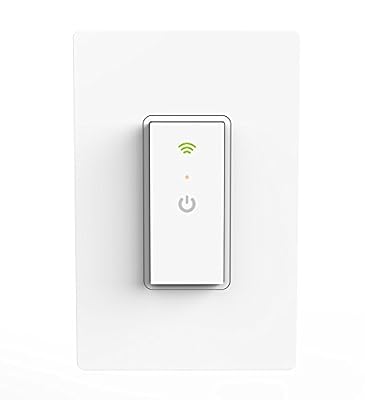 They look cool for a good price and I read very good reviews about these light switches. If you find a way to integrate them into openhab, please let us know.

Just wanted to share the response I recieved from Ankuoo tech support when I asked them if there was an API for the neo switch.
-B

Thank you for your interest.

NEO switches don’t support open API. Therefore there is no way to control them other than smart phones.

However, we will release a new wall switch (and a dimmer) that supports open API. The base plug is at the final stage of integrating with Amazon Echo (Alexa) and will be ready for purchasing by the end of this month: https://www.amazon.com/gp/product/B01M5D4GEO.

Please let me know if you have any other questions.

Thanks for the feedback Brian!

Any word on these switches? I just ordered one from amazon. Do we have a way to control it?

I guess the newer REC switch has a API available any thoughts on how to access it?

I just installed the REC wifi switch and it is awesome. I did a packet capture and noticed they do call an api to login and then an API to list the devices saved to your account.

The encrypted password and access key are alway the same, so they dont seem to be using and private key of salting algorithm, so it should be doable.

However, seems like they might be opening a socket connection to communicate back and fourth to the lights. I might need to decompile the app to see how they do it.
I also want to get this on openhab.
I’ll post it once i get a chance to find out more.

I see there is some interest in Ankuoo devices for this project, but not so much to have actually gotten them to work.

Has any progress been made? I see a couple of postings by Michilson regarding a wall switch. I’m more interested in an outlet switch like the NEO PRO. It appears the REC Lite and REC PRO (not sure how they get these names) is a different outlet switch from the NEO PRO with similar specs and allegedly supports open API.

Anyone looked at these devices?

I have a couple of these plugs https://www.jaycar.co.nz/wi-fi-control-mains-socket-and-power-monitor-with-app/p/MS6124

Whilst they are not Ankuoo branded they are essentially Neo Pro’s pretty much similar.
On another forum someone had figured out that the guts of them was actually some sort of Broadlink device, specifically a SP2

Long story short, I couldn’t get them to work with OpenHAB evern after wiresharking the comms, so ended up with Node-RED (node-red-contrib-broadlink)

As long as you reserve their DHCP address (so it doesn’t) change, then they are very reliable

Thanks for the suggestions. I’ve done a little digging and I’m just not sure OpenHAB is right for me. It seems to be more of a DIY sort of show requiring a lot of learning. I actually found this site before and spent enough time with it that I signed up. I had forgotten that and discovered it again. I see now why I forgot it. lol I just read some of a thread where someone was promoting the idea of a list of supported devices. There are no small number of posters (the more experienced ones) who say such an effort is doomed to failure.

If it is impossible to provide a list of supported devices I don’t see how I could ever find a device that will do what I want using OpenHAB other than trial and error. I might just as well keep trying to work with the vendor’s apps.