Any good Openhab2 book in English?

Hi, is there any good Openhab2 book avaible in English?

The only one I have found is in German: 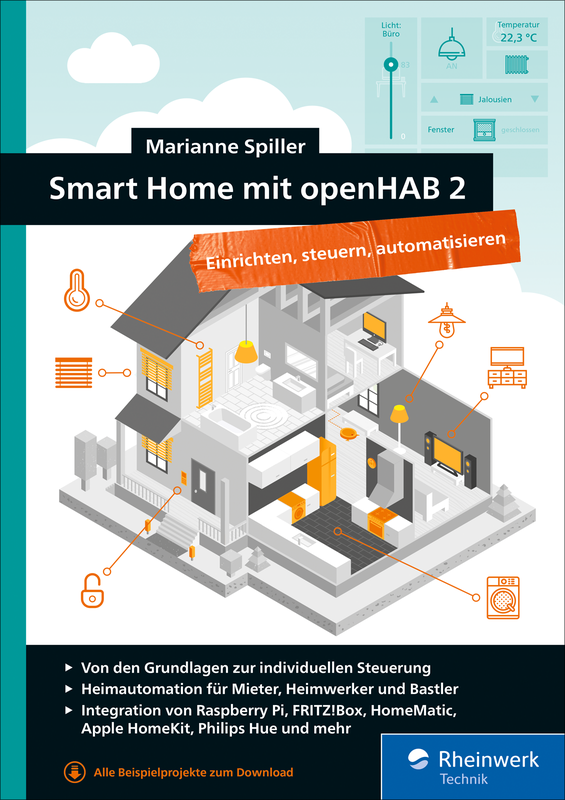 Hi, is there any good Openhab2 book avaible in English?

It seems most young’uns these days require You-tube videos of everything. Extra bonus if they can do it without any independent thought.

You didn’t give that gift information above, so you can’t blame anyone for pointing to the official docs, sorry.

Back to topic:
We had the question some days ago.

The openHAB documentation in PDF Beginners

I tried hardly to find a publisher who’s willing to publish an English version of my book as Rheinwerk-Verlag doesn’t, but I wasn’t successful. The publishers regard the whole thing as a niche product. And they generally speaking have limited interest in a book the won’t own the full rights (as the German rights are at Rheinwerk). So I’m stuck at this point. If anyone has an idea: please let me know! I feed there is a growing interest in this topic, and it would be nice to cover it… Cheers, M…

Marianne, the author of the above mentioned book, has already tried to publish this in english too,
but didn’t have success yet.
I think the main concerns are based on copyright stuff.

I think it will get difficult to find a 100% opanHAB related book,
but maybe there is more available on the general smarthome/open source topic.

I’ve thought about writing and self publishing a book but:

I suspect others have faced the same mental calculations and have come to the same conclusions. So as long as an English version of the German book fails to finds a publisher, I suspect we won’t see an English book until sometime after OH 3 is released.

I’d almost certainly have to self publish

I know of a consultant who self-publishes on Amazon. For his current book, you can get a Kindle version for $3 more, if I recall correctly.

Any updates on this?

Nope. We’re all still trying to figure out how to talk about OH3 while helping OH2 users transition.

I’m a writer, and my opinion is that it’s not worth anyone putting the effort into writing a book about openHAB. It’ll be out of date before the first draft is written, and out of date again before it gets printed. Not just because of changes to openHAB, but because of changes in smart-home technology. That’s fine if you’re getting paid by a publisher to update it regularly. If you’re self-publishing, you either do those revisions for free or not at all.

If anything, I’d probably look to Rich to turn his design-pattern posts into a “home-automation for dummies” book with openHAB examples. The concepts are the important part, though. openHAB is just a medium for implementing them.

I went down the path of publishing and came to the same conclusion. OH and home automation technology moves forward too fast for a book to keep up. Heck, we can barely keep the docs up to date.

And instead of writing a book around the design pattern posts I’m heading down a different path. I’m implementing most of them as libraries which, when we have the marketplace, hopefully can just be installed. Then when someone needs to implement the Gatekeeper they just instantiate the Gatekeeper class and call its functions. If they want a Time of Day they just install it and configure the Items.

A very large percentage of the Design Pattern posts, from me and from others, mainly boil down to timer management. I’ve written a TimerMgr class and some other utilities which make working with timers as simple as

That will create a timer for itemName to go off in 10 minutes to call runMe. If a timer already exists, the timer will be rescheduled and the flappingFunction will be called. That’s the root of most of my implementations of the Design Pattern posts. For another example, one can implement the Cascading Timers design pattern with a GateKeeper. For example, an irrigation schedule would be something like

No messing with Hashaps or ZonedDateTimes or anything like that. No need to really understand the theory of operation and each line of code of the Gatekeeper, just how to use a few functions.
I think building tools like these will be a bigger boon to users than a book would be . Over the years I’ve come to the conclusion that many/most OH users are not able to generalize the design patterns very easily to apply them to problems different from what are used as examples. So I may as well give them the implementation and show them how to use it instead.

And Kai has stated a goal to have a working marketplace for such things by the OH 3.2 release. I don’t know if it will support rule templates and libraries but that’s the plan. Fingers crossed.