As winter kicks in, I was wondering whether anyone has identified any new (inexpensive) remote managed TRVs?

I am aware of options like Tado / EvoHome and Max! - but was looking for more recent feedback.
I know there are some cheap options on AliExpress?

I am in the UK.
I will manage temperature and humidity feedback externally using Xiaomi sensors.
I also have Nest that I’ll simply use to trigger the overall heating on / off.
What I’d like to do is split the individual zones (rooms) that are controlled around the house into separately heated areas.
Basically, just need something that can open and close the radiator valve - don’t even need a pretty temp display, or feedback from the TRV.
Any suggestions / recent feedback?

I’m looking at the same - I have a Nest for general heating control, but want independent radiator zones, and temperature sensing decoupled from the radiators.

I’m looking at affixing Thermal Actuators to the radiators (such as this, around £13 each), and drive them by a Sonoff device (£7 each). For this you’ll need a mains supply to each radiator via a Sonoff - but mains wiring is fairly simple to run, and is more reliable than battery.

The prices above are for singles, and from Amazon, and still comes in at £20 per room - you’d easily pay that for a standard TRV from the likes of B&Q - and if you buy them in bulk, or from other places, and each room ends up even cheaper!

If you do go for anything like this before I get a chance to… please let me know how you get on!

Amazon, and still comes in at £20 per room - you’d easily pay that for a standard TRV from the likes of B&Q - and if you buy them in bulk, or from other places, and each room ends up even cheaper!

That looks a very cheap solution. Only issue is that the fitting appears to be one that has to replace the existing valve on the radiator, rather than a simple unit that can sit on top of the existing fixing.
Have you done much research into the actual sizing? Looks about right - if it is, could potentially just swap out the current valves and plug this into one of the automated sockets that I currently have (until I get around to something prettier)
If I get anywhere, I’ll let you know - I am already geared up with 3 types of automated power socket, so in reality just need to swap a valve out to get testing…
Will hold fire here though to see if anyone has either done this - or has any other bright ideas…

Thanks for the response.

I’ve actually ordered a similar item since digging out the link! It’s an M30x1.5 thread, so should screw directly onto the existing valves, replacing the existing TRV head (well, that’s what I hope).

I will let you know!

Magic!!! I was sneaking a quick look at work. This should be a straight swap out - will order one too and test

Similar item? What did you order?

I found this one on eBay which is coming from a UK seller, hopefully by the end of the week so I can have a good play.

I’m hoping that they’ll relist again with another batch, as there were only 2 available earlier.

I went with this:

Looks to be much the same, although yuours appears to have a permanent
override (red switch)
For starters I’ll just use one of my LightwaveRF sockets or and a normal
plug - if I am happy with the result, I’ll port over to a slicker solution
that I can mount behind something.

The Thermal Actuators to which you have provided a link are simple On/Off actuators.

How are you going to provide the hysteresis to stop the valves opening and closing like crazy? I suppose you could do it through openHAB rules.

More expensive valves allow control through PWM which is a bit better.

Although radiator valves like the Homematic or Max ones are more expensive, they control the flow of water in a linear fashion. (The room needs to be a little warmer so the valve opens a little or if the room is cold, it can open the valve fully).

Additionally, as they link to your home automation system with RF and are powered by batteries, you don’t need the time and expense to run mains cables to every radiator.

Some of my underfloor heating valves are leaking and coming to the end of their lives so I’m looking at replacements and reading this thread with interest.

Some valid concerns, and I may well not find a suitable solution using these components.

They take around 3 minutes to go from fully closed to fully open (and vice versa) so some kind of pwm can be approximated with this to control the flow.

I am using the Xiaomi Heat / Humiidty sensors to dictate current temps etc - these only update when more than 0.5 degrees of temperature change has happened… or 50 minutes have passed.
Since I’ll have the sensors away from the radiators, I am guessing(hoping) that the need to open / close radiator valves won’t be too frequent. I’ll more than likely also code something in my rules to extend slightly beyond that variation in instances where the heating has been off for less than a certain time (e.g. if target is 20 and heating was on in the last 15 minutes, don’t switch heating on unless it gets to at least 1 below target)

I don’t have the TRV yet - so can’t provide a more educated guess at to how it will work in reality.
ALSO - since I want to control each room individually, I think that writing code to simply manage on / off states, will be far easier than trying to cater for a TRV that has on, off and any nominal increment between these values.

That said however, my initial question on this thread was to determine whether anyone has a working Room By Room temperatiure management solution in place, that didn’t cost an arm and a leg to implement (i.e. Feedback on commercial offerings that you may be using) - If it becomes apparent that Max! units at 20 pounds each are highly rated by people using them, I’d consider that.

I just don;t want to be paying £60 per Unit and still need a gateway. What are you using?

What are you using?

I’ve only got a couple of radiators and they’re in rooms in the basement. They had non-TRV valves so were basically on the whole time.

I got a Homematic CCU2 as I wanted some other Homematic functionality so bought Homematic valves for these radiators. I can now control them easily from a wall panel and the radiator itself. I’ve also got rules to turn them down at night etc
They work really well and the RF at 868MHz isn’t like wifi at all in that it always works.

I’ve got Homematic RF window sensors too and they work perfectly, so much more so than the hard-wired ones I’ve got connected to an Arduino which, despite lots of filtering, still sometimes give false readings.

In a previous place I lived, I had MC20 valves for the underfloor heating which you can get from Ali Express for 13.5 USD (unless they are knock-offs but they look exactly the same). I definitely wouldn’t want low quality valves for water as a leak could prove very expensive).

Since the TRV only opens and closes by applying pressure to the existing manifold, I suspect there is little / zero chance of the Actuators above causing any leaks… but I’ll stick to a ground floor radiator for testing purposes.
Will let you all know ho I get on.

You’re absolutely right! I should have known having changed enough of them in the past.

@Confused - The radiator valve works perfectly -= and is super quiet too.
How did you get on?

I’ll more than likely be ordering 4 more for the other radiators - haven’t decided what approach to take for the power feed - currently am just hanging off a lightwaverf power socket - but sonoff seems nice and cheap.

Mine was delivered today, so still getting it set up with OH - will hopefully have a bit more of a play tonight.

Game plan is a simple xiaomi temperature measurement in each room and an On
/ Off switch for the Thermostat via sonoff or similar.

I’ll create a Single switch that governs whether any heating is required.

Each zone has a further switch to determine if THAT zone needs heating.

I suspect I’ll then have modes
The requirement for each zone will be determined as follows:
If (away){allzones = Off}
(I have nest, so can use the home/away functionality of this to dictate
status accurately)

I’d need such a rule for each zone - and would either need to fire the the
evaluation every x minutes, or whenever a new temperature is received.

Xiaomi temps are reported when more than 0.5 degrees of change have been
detected, or about 50 minutes have passed.

I’ve not found any sample rulesets on the community, but this shouldn’t be
too tricky to code, just arduous.

If you code something up before me please share

I saw you ended up with knockoff Sonoff’s

I am getting some LightwaveRf switches in the post today - a;lready have everything else, so will be good to go using these.
I also have an original Sonoff - but don;t have the USB adapter to flash the firmware (actually . . I should dig in all my old Arduino stuff . . maybe I have one)
Irrespective, when I get that, I’ll give you the rundown.

That said though, the price increase from Sonoff to LWRF is only about £5 a unit - not sure I want to be flashing things and getting all “hardware-guy” to save so little.

In a time where I was building controllers usding Arduino . . I learnt just how bad I am at soldering and how timeconsuming hardware mods are.

Let me know how you get on.

You actually don’t need to solder anything, or use a USB adapter, you can update the firmware to Tasmota over-the-air which takes only a few minutes to set up initially, then about 2 minutes per device.

I’ll do a proper write-up of it soon, but the basics are the Thermal Acutator, and the Sonoff, and controlling my Nest (which I’ve disabled all the smart/learning stuff on, and am simply using it like an On/Off switch) 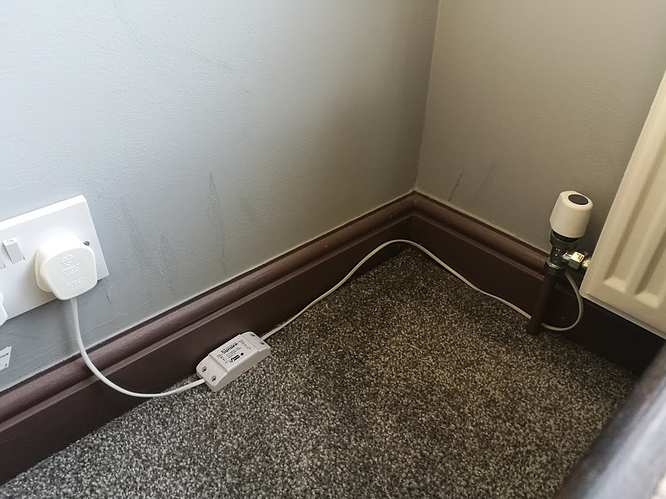 Only a temporary installation at the moment - when I move I will be doing it much more nicely, running cables through the floor etc.

With my setup, each room or zone can have 1 or more temperature sensors, which it will average out, and then use those to determine whether to switch those rooms on or off.

I am using an ESP8266 and DHT22 - my plan is to add a rotary encoder, PIR and OLED display to each one, and have this be used for displaying current temperature, setting the new temperature, and used for other purposes - controlling music, displaying weather information etc. 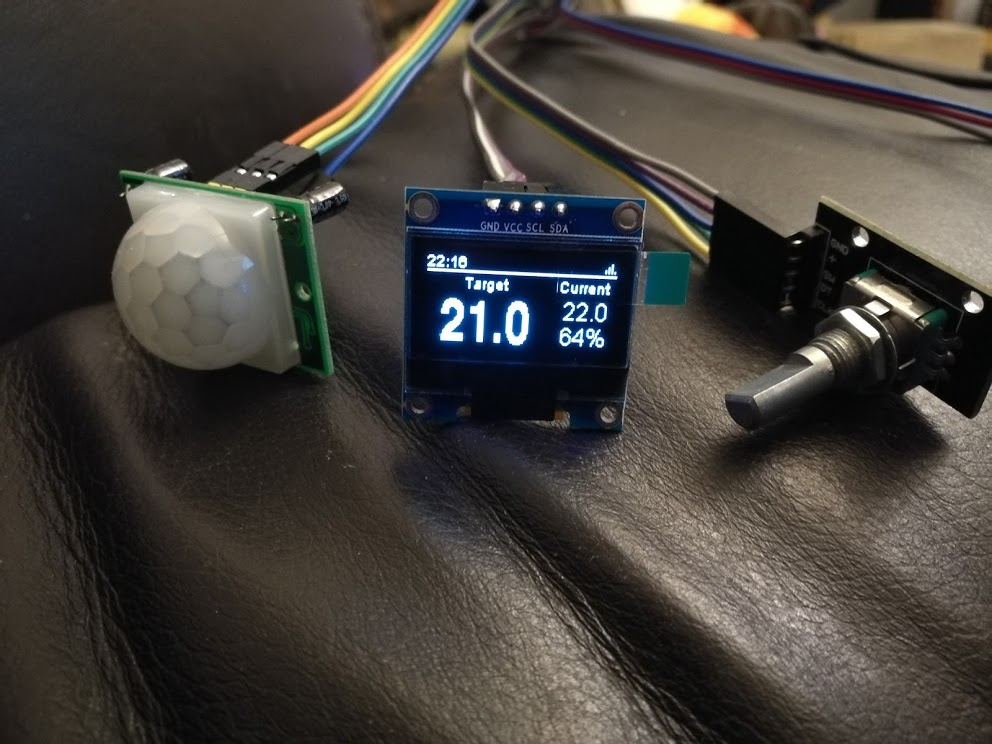 Like I said, I’ll do a proper write-up soon of it