Attn: Lightify Users.....Osram will be turning off the server

After five years of service, we have taken the heavy decision to shut-off the LIGHTFY cloud servers on August 31st, 2021. 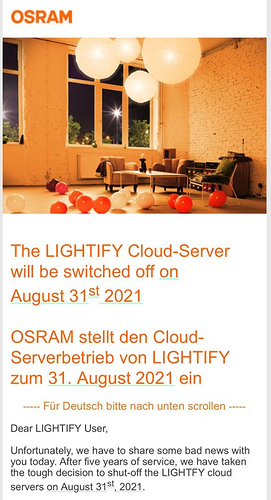 More reason for local control. Otherwise you are only renting.

To control your smart lights and plugs beyond August 31st, 2021, you need to fully reset your entire system. Afterwards you can simply integrate it into any other ZigBee® compatible system – like other smart lighting or smart home systems with intelligent assistants that are available on the market.

I saw that, but examples like this and what other companies like Sonos and Sony have done recently furthers my belief that manufacturers need to guarantee life of service when purchasing. Just because you feel the service is no longer viable what gives the right to limit or remove the level of service I purchased without remuneration.

Notice they did not even say the product would work with Zigbee systems. They just treat their customers as organisms to be exploited.

To be fair they (we

) aren’t really their customers any more. OSRAM span off their lamps business in 2016 and it became LEDvance (which was bought by a Chinese consortium - IDG, MLS, Yiwu - in 2017) which retained the rights to use the OSRAM/Sylvania brands on lamps but I believe the Lightify ecosystem remained with OSRAM GmBH.

The newer SMART+ devices (the ones with QR codes on them) are ZigBee 3.0. The older Lightify stuff is ZLL/ZHA (doesn’t have the right HW to upgrade either) and there’s no real commercial benefit to running the Lightify cloud never mind updating it. (That’s not really specific to Lightify either.)

LEDvance test with a handful of ZigBee vendors (among them Samsung SmartThings and Amazon Echo), but there’s a slightly smaller list of vendors paid up to pass through firmware updates (I think SmartThings at least may be missing from that list).

For what it’s worth, after 31st August basic Lightify functions should still work via the app/gateway for lights and switches (on/off, dim/temp/colour, static effects) but you won’t be able to add/delete things and sensors won’t do anything useful. The openHAB Lightify gateway binding should still work - and should even be able to drive dynamic effects since it doesn’t pull them from the cloud (but I haven’t tested that yet).

If that made it to their open source code tree that could be useful.

Sorry for hijacking the thread, but what did Sonos do recently?
I’m asking because I’m considering buying a Sonos speaker, largely for the good(?) OH2 integration.