Did anyone try using the Z-wave feature to add an August lock to Openhab2?
When pairing the August app complains about using SECURITY class V1 Vs. SECURITY class V2, but it still pairs to the network.
the Z wave binding shows the device as unknown ( I guess it’s because it’s not yet in the database) and I experienced a big slow down on my z-wave network. Everything went to normal after removing the lock.

You must use the development version of the binding here to get the still under development and testing implementation of the SECURITY command class.

Check here to see if your device is in the database.

So I’m trying to add the device to the database. I went to the z-wave folder ( /var/lib/openhab2/zwave ). The device is paired by I don’t see any xml file for it. Am I looking on the wrong folder?

Resurrecting this thread and pinging @chris . I purchased a broken August lock 3rd gen from a garage sale and was able to fix it. Everything works except for the zwave part as described above. I’m using latest zwave binding snapshot hoping latest would make it work. The device is in the database and actually pairs, but still shows unknown in Habmin. Like above, there’s no xml file generated for it.

Shall I wait or should I just esp8266ify this thing. It’s just a servo motor and an accelerometer.

Again, sorry for rezzing this thread, but I’m also having trouble here with this lock. I’m running openhabian and using the latest test build… zwave binding says I’m running 2.4.0.M7… When I include the lock the August software warns me that I’m connected to the controller using Security S0 even though the lock supports S2… The lock can be added to the zwave network, but openhab doesn’t recognize the device as anything other than Node5. Note the missing Manufacturer and Type/ID in the found Thing attributes… This issue is over a year old now… Suggestions? 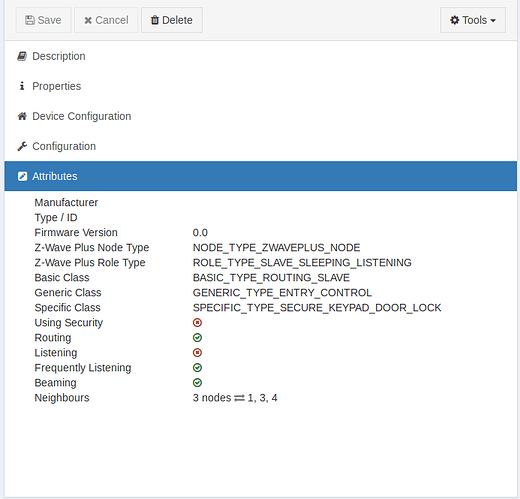 I’m running one of these very successfully. It looks like the lock is not being included securely. Mine looks like this. Not sure why it says Unknown Manufacturer. 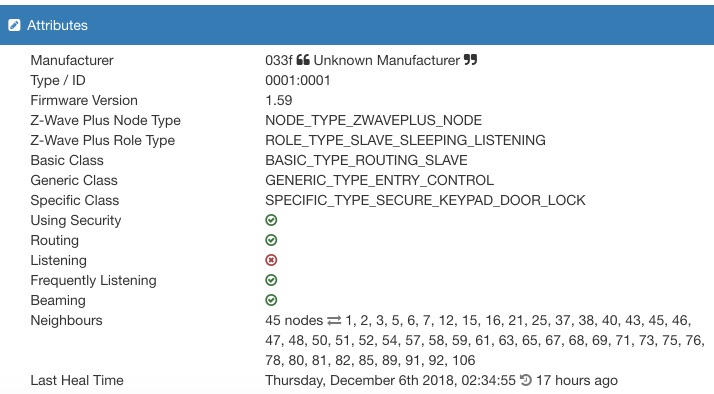 Are you referring to the August smartphone app?

How are you including the lock? Are you using HABmin (correct way to do it), or are you removing the stick from the openHAB host (won’t work for secure devices)?

Also, how is the controller enabled for security? It should be set for Entry Control Devices or All Devices.

When I included mine, I seem to recall that I set the Inclusion Mode to High Power.

BTW, once you get it included…

The binding now supports the door open/close sensor, as well as lock/unlock.

Finally got it working, thanks to you. I had missed the part where I needed to Include the device from the HabMin interface. Thanks again!

I know I’m bumping this old thread, but I recently assigned one to my Openhab2 setup.

The Lock channel doesn’t appear to update its state properly when the device is being unlocked. The lock will switch to Unlocked (Switch OFF) for about a half a second before resetting its state to Locked (Swithc ON), which pretty thoroughly confuses the system.

Has anyone with this lock had that problem?

Try changing the Command Poll Period from the default of 1500 to 6000. The lock takes a few seconds to change its state after receiving a command to lock or unlock. The 1500 ms poll period is polling the lock before the state has changed. The Command Poll Period is in the Device Configuration panel in HABmin.