I have noticed that when a rule runs a while after a rule in the same .rules file was run, there is a pause which ranges from 2 - 8 seconds) as (I believe) the .rules file is recompiled. The delay is definitely within openHAB.

This is VERY painful if you are using remote light switches, monitoring IR codes etc. and it removes vital spouse approval of the system.

A previous poster (thank you Arno - “AFromD”) suggested a work around where you add a rule which does something pointless every minute, thus ensuring the the rules stay loaded in memory.

This is nasty, but it works…

Has anyone found another way to beat the delays? Have I got something wrong?

Has anyone found another way to beat the delays? Have I got something wrong?

Rules only get compiled when they’ve changed or when they’re bad. If that’s happening to you every time it’s likely the latter.
If so you should be seeing error messages in openhab.log assuming proper logging debug level.
The former may happen inadvertently when file access properties change. Not sure about your windows setup in that regard. Consider openHABian on Linux/Raspi.

Thanks for the reply. Much appreciated. There’s nothing wrong is the rules and no error messages in the logs, and they all function perfectly, just with a delay, sometimes.

File access properties may possibly get changed by backups etc.

Do compiled rules get moved in and out of memory to make space? that might add a delay? If yes, can I increase the amount of memory allocated for them, to reduce the frequency of space recycling? Please assume I have infinite amount of RAM available.

I originally ran on Raspian for a couple of versions (over 4 years) but moved to Windows after various Pi related reliability issues - and I don’t regret it at all… Nothing would drag me back to Pi. (at least for this use - I have others in use as HABPanels, Squeezeboxes and CCTV monitors). They are great, but not for something mission critical. I like my VM’s, raid disks, dual redundant power supplies and dual redundant UPS’s - and no SD cards or USB power supplies… So, my setup is rather more server farm than most peoples. It’s there running already for work, so the additional power for another VM is minimal.

I do love the way that the OH files configuration can be moved between platforms… and having the key information in files would make the transition to another platform very easy (not that I intend to) Everything is via MQTT, most recently some Zigbee stuff via the Zigbee to Tasmota project running on a Sonoff Zigbee Bridge Pro device. It’s really nice. The one downside of my server based Windows setup I’ve found is the inability to plug a Zigbee or ZWave dongle into the openHAB server, however having played with ZWave in OH3.0 on Pi, I have decided I like externalizing the Zigbee handling, so it’s a lose that pushed me towards a win. I’ve also played with Zigbee2MQTT project, which is very, very good, but requires a Pi or a Windows box with a real USB port…

Your OS manages ram not applications or both which is annoying

I’m not familiar with the Azul Zulu JDK which is the OH recommended Java for Windows installs. I might google that

Yep, and you will not be finding understanding advocating use of PCs and Windoze in particular.

BTW openHABian used to but no longer uses Azul java, one of many ‘collective’ experiences shaping openHABian to now be a stable 24x7 basis to OH users. There’s others such as SD mirroring to compensate for RPi weaknesses.
FWIW, you don’t need to use a Raspi, it is also available on debian on x86. I’d suggest to at least move over there, Windows is a PITA. Java on top even more so, that’s quite unexplored territory and I believe that’s what you’re right now getting hit by. Not many (if any) that can help you here.

To stay on topic, yes this delay-after-a-period-of-disuse was a real measurable effect in OH2. Not clearly understood, to my knowledge, not even as to whether its about “recompiling” or “swapping out”.
It may well have to do with the host environment (Windows, Java version) but openHAB remains supported in many environments - brushing it off as ‘oh Windoze’ is not helpful.

OH3 comes with a “new rule engine” hoped to cure many ills - but I do not think you are the first to observe this old delay effect under OH3.

Of course in OH2 days more of us used DSL from xxx.rules files, and that is no longer true. This might be the key.
As you can see the delay problem, you could usefully experiment by replacing an affected rule by a GUI version. The rules are managed in a different way that might be unaffected. (It might even be worse!)
(There are just a few pitfalls revolving around if your files-based rule uses shared ‘globals’, typically timers, try to choose another rule for testing)

You might even make a dummy GUI rule triggered by the same event as one of your ‘problem’ rules, just to make a log entry so that you can see/compare timing.

add a rule which does something pointless every minute

I do not think you need anything like every minute.

When I reviewed a fairly extensive OH2 system for this noticeable effect, I think I only needed to add a ‘keep alive’ rule to one file, set it for ten minutes maybe. Carefully juggling rules between files that used “naturally occurring” frequent events like sensor updates took care of most files.

Thanks for your helpful response. Much appreciated. It’s good to know that OH remains supported in many environments,… belittling the choices of users is never going to help anyone or win the platform new users. It’s also good to know that others have seen and investigated the effect before.

I will try the GUI rule to see what happens.

This statement confuses me because the same can be said for all of OH configs, not just text configs. That’s not a knock against using text based configs but I find leaving statements like this unaddressed creates FUD when it comes to UI configs. All the UI configs are stored in text files too and are just as easy to back up, port, check into source control and all the rest as .items et. al.

But back to being on topic, 2-8 seconds is huge. Unless you’ve written poor Rules DSL (i.e. over specified types and lots of forced use of primitives), even if the rules file is being reloaded it shouldn’t take that long. But I don’t think that’s what’s happening. You would see “loading model blah.rules” in the logs if it were reloading and reparsing the .rules files.

@rossko57 is probably the biggest expert on this rules delay topic though. There were a number of very extensive threads where this was explored pretty deeply.

The UI rule experiment is a good one. I don’t think I’ve seen this problem reported with UI rules. However, there might be a slight delay the first time a given rule is triggered because the script actions and conditions are not actually parsed until that first trigger. But that delay should be much less than a second unless you have poorly written Rules DSL code.

My worry is this could be a pervasive problem, that is mostly hidden. No-one will notice (or care) if dusk-to-dawn lighting is some seconds late.
It’s only if you get up for a pee in the night and the bathroom light is sluggish coming on that it would get noticed. We humans notice 2 secs there - but then just grumble, and it works fine next time.

The GUI rule comparison should be interesting - it wasn’t possible to do like-for-like in OH2, but can get closer in OH3.
Really I’m expecting DSL GUI to be well behaved, and this is some files management issue.
If not, seemingly DSL linked - a comparison to say a javascript GUI would be in order.
Or, if seemingly file linked, a test with javascript rule from file.

Not that I think anyone is interested in fixing it, but if we understand the scope we have the avoiding recommendation. It’s all vague now.

I have a bunch of switches that trigger some dumb devices via IR where I cannot capture the state. Each switch has then been implemented as 2 switches - an on and an off switch with a rule that says “whenever one of these change to on, set them both to off”.

I don’t think I have ever noticed a delay with the rule setting the switches back to off.

This is of course highly subjective and most of the time the interaction is via alexa so I don’t actually look at the switches in the UI, but when I have used theUI, it has never been an issue.

I experience a recompile delay too - but only once after I changed a rule, and it is far away from the time you experience.

To get some numbers I did a measurement.
It’s a reed contact → MQTT → OpenHAB (Rules) → MQTT → Relay (primary side) which I measure here. 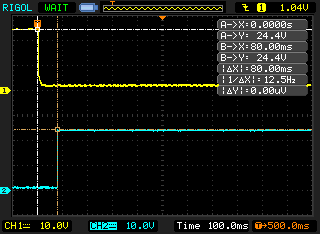 Behavior after a rule has changed (once): 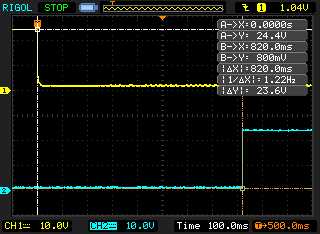 Around 820 ms - this is noticeable and varies a bit (had shorter times around 504 ms too).
So recompile takes around 740 ms

Thank you for the replies, comments and tests.

I took on board Rick’s notes about bad DSL “over specified types and lots of forced use of primitives” (always the font of wisdom) and re wrote my rules… which had evolved over several years.

This definitely has made them snappier, but only after any compile delay. Still, worth the effort (Thank you, Rick)

I tried a comparison against a GUI built rule. There was milli seconds difference between the two, even after leaving them dormant for 24 hours… in fact the file based rule often won.

So what’s different between that and my day to day rules. The clear difference I can see is in the size and complexity of rules files.

I have 185 rules - spread across 10 files (by room) Some rooms have 3 rules, some have 30 complex rules. I’m wondering if the garbage processing only effects the bigger files. Some of the bigger rules files will go unused for 8+ hours, every day. I want to avoid 184 individual rules files.

I’ve added a pointless action every 30 minutes into the time critical rules files and that does provide a solution a real problem. It’s not pretty, but it works and doesn’t require anyone to expend energy on old code…

I’ve never run OH on Windows, only Debian and Ubuntu, so I’m not sure if this is possible…

In my installs I always increase the amount of memory available to the Java OH process by adding the following to /etc/default/openhab:

Maybe if you can increase the amount of RAM available to OH then rules won’t get paged out? (If that’s what’s happening.)