Best Persistance for HABpanel and graphs

I am a bit overwhelmed of the possibilities of HABpanel when it comes to persistance. Currently I have only mapdb which can only save the current and the state before, but not more…

So before trying around, what is the best service for persistance and graphs and HABpanel?

I run OH2 on a RasPi2, and the persistance should run on the same machine.
I don’t have a huge amount of items, but would like to save ON/OFF and strings as well (that seems not possible in RRD4J?)

Very thankful for any advice.

You are correct, rrd4j will only save numerical data. You can use pretty much any of the others beyond MapDB for this. Personally I’ve been using InfluxDB and been pretty happy with it. But I use Grafana for charting which you wouldn’t be doing with Habpanel I suspect. SQLite is a good choice for one that doesn’t require you to set up any additional software.

I’ve installed InfluxDB and it works very well so far with the basic things! Thanks for the recommendation!

Add Grafana to it and you will never want another graphing solution.

As for the influx it works well with grafana, just its syntax that is sql-ish but not sql is infuriating. 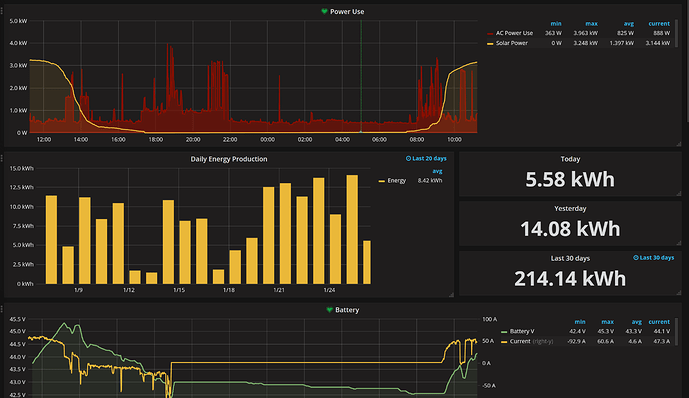 How do you display Grafana charts in HABPanel? Rendered PNG files or how? Thank you.

How do you display Grafana charts in HABPanel? Rendered PNG files or how? Thank you.

Yes, I know, thank you. But this approach is really slow on an average Android panel… it akes about 10 seconds to display two charts. I also tried it on an iPad Pro and there the charts appear immediately.

So I wonder if there are some “best practices”?

So I wonder if there are some “best practices”?

you could try to use pre-rendered images, but you will get static info.

or… get a better quality android tablet