I have been thinking about best practice for developing a widget and the fast way to implement good code with the least amount of effort from the user.

I decided to try it. I installed binding then thing… easy.
Next I went to Model / Create Equipment From Thing / Select ALL and create thing
You can get to this stage in a couple of min with every item created for you. 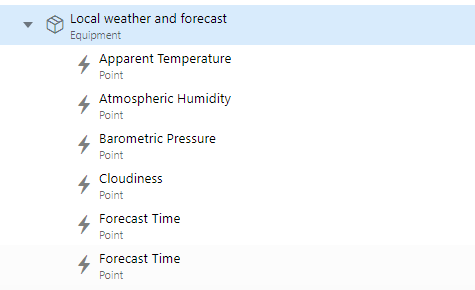 Lets take one item into consideration

You can’t change the item name once created in mainUI.

Note: This is not a complaint

Creating items this way puts them all under a group.

If you set a widget as the default widget the item props is auto populated to this value.

If the name: itemPrefix is changed to name: item then item would be Localweatherandforecast

This is very helpful if you have multiple things of the same type.

Others have suggested the same thing and RGroll has done a fantastic job. I apologise that I encountered this on his example widget.

I think when selecting the Widget as the Default widget I can auto populate the data here. 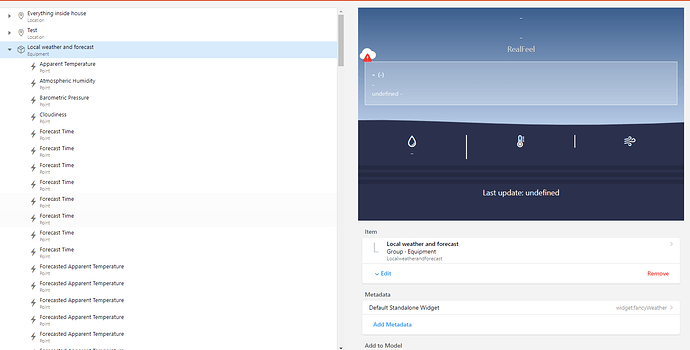 I think this may lead to less questions about how to setup widgets and more fun time for all.

Please discuss feedback is welcome as is other ideas to standardise widgets.

. I’ve to say that I never used the UI to create things/items, so I does not had that in mind while creating the widgets tbh.

But you brought up a totally fair point here and it should be as easy as possible, to use (and set-up) these custom widgets. So let me summarize this, to be sure that I understand your request:

For people that uses the english language in their setup your suggestion might match and they only have to define their custom thing name as a prefix in the widget and they’re good to go. (which is of course a benefit)

For everyone else, where the suggested item-naming is localized and does not match that 2nd part of the pattern, it’s still some manual work to change all the item-names to the english item-naming within the creation process (as it does not seem possible to do this later on, as you said) and have to set the thing prefix in the widget afterwards.

After digging a bit deeper in the the UI-side of things I recognized that the custom naming is even more complex (at least in the OWM-binding). The localized item-namings only get applied on things which…

Even the english naming seems to be different for the second case, where everything is lowercase. (which would mess up the logic that you mentioned, as this would force even people with an english setup to align the item-naming in these cases)

Additionally the item naming pattern gets an additional item parameter if there are multiple items that matches the same information but for a different time-period (which isn’t that big of a deal, as it could considered easily while developing the widget), e.g.

To summ it all up: I’m not sure if this would bring a huge benefit, with all that differencies in the naming pattern (which does not look 100% consistent to me)…

Wouldn’t it be possible to just use the ‘Expert mode’ in the ‘Create Equipment from Thing’, where you can just paste all the items following the pattern that comes with the widget? As I understand this - it would also link all items to their respective channels then?

What I definitely take with me here is, that I should take the full item configuration (with its ‘tags’, ‘groups’ and ‘icons’) into consideration and attach those to the widget I publish.

Thankyou for taking the time to respond in such a detailed post. You bring up a lot of points I didn’t even consider.

So let me summarize this, to be sure that I understand your request:

yes this is what I have done for my Aircon Widget as I have multiple aircons. (current local time is 6:30am and 24°C outside)
I guess it is dependant on which binding and language you use.

Using OWM as example is good because most users will have weather in their setup. If the two things are created for two different locations you can quickly have hundreds of items.

To sum it all up: I’m not sure if this would bring a huge benefit, with all that differences in the naming pattern (which does not look 100% consistent to me)…

This looks to be true for the OWM binding in the way that I created the items. If its not consistent it will just add complicities that are not needed.

Wouldn’t it be possible to just use the ‘Expert mode’

TBH I did not click on this until I read your post. To me this method is acceptable I just didn’t know about it. Sometime it needs to be right in my face to see it.

I defiantly learned from your widget and have a couple of lines in my cheat sheet to use.