I’m running in an error when I use contextual info triggering item name in blockly.
What I’m trying to achieve is to kick off a scene of switching on and off a light a few times in a row that is connected to a Shelly1. The shelly has two channels, one for the power ON/OFF and one for the physical input switch ON/OFF. The scene is supposed to run on a timer, that I would like to cancel when the physical switch is pressed.

my rule in openhab 3.4 currently looks likes this: 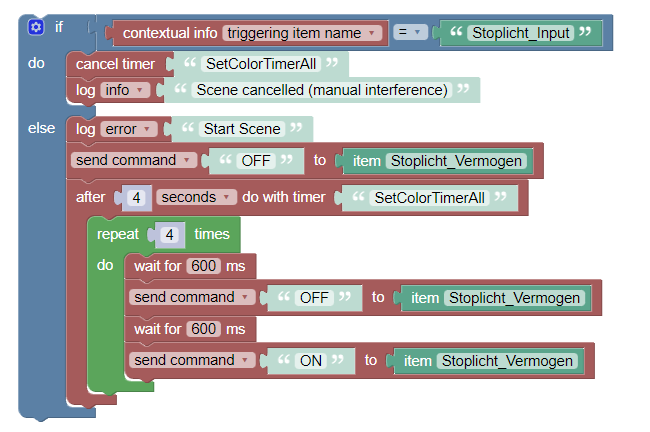 and has two input triggers:

if I physically press the switch the rule runs as expected, as the log reports the timer cancellation.

however, when the rule is triggered by the cron condition, I have an error in the log:

I expect that the problem is caused by the fact the the cron trigger is not seen as item. Is there a way to get around this problem?

You may need to use a script block to see if this.event == undefined to tell the difference between the two triggers. There is no contextual info at all when the rule is run any way other than an Item event.

It might be easier to split this into two rules. As written, it doesn’t matter what Stoplicht_Input changes to. If it changes to anything it’s interpreted to mean that the scene should be cancelled.

This way, the contextual info will always exist in your rule because the only way it triggers is via an Item event.

thx. I failed to spot this easy approach!

You may need to use a script block to see if this.event == undefined to tell the difference between the two triggers.

not sure how to interact with the script block. I assume I need something like:

but I don’t understand how it would fit into my blockly rule?

The script block is a way for you to arbitrarily add code not covered by the existing Blocks. It has to be ECMAScript 5.1 (i.e. an old version of JavaScript). Looking at the code tab of the Action shows you how the Blocks convert to that code. 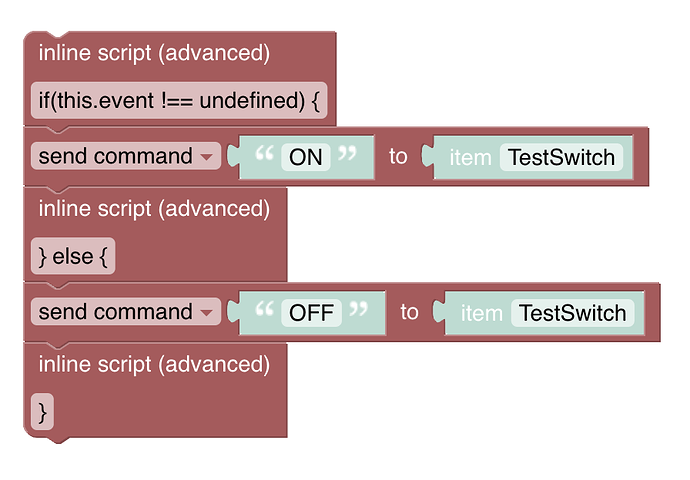 Notice how you have to reproduce all the parts of the if/else statement using script blocks because you can’t use the if/else blocks.

which would allow to test if “event.itemName” exists (indirectly)?

There’s a PR open (I think it’s still open) to add event.type for all the ways a rule can be triggered. When/if that gets merged, there will always be an event and you can tell how it was triggered based on event.type, eliminating the need to test for undefined.

So I wouldn’t change too much to handle this specific use case.

However, I don’t know if there are other cases where trying to test for undefined might be important. Sometime soon (I hope) event will always exist so that change won’t be necessary.

as a non-programmer it took me a while to recognize a small mistake in the script. @rlkoshak you obviously intended to state:

because we are testing for an event that is equal to undefined, not unequal. But anyway, thanks for providing this solution. This is much more efficient compared to the quick fix.

@stefan.hoehn maybe this usecase and the solution approach provided by @rlkoshak qualifies for the documentation on “inline scripts”. A lot of the documentation is quite good, but this particular paragraph can use a less advanced entrypoint

I read elsewhere that some feel blockly is the bridge to coding; I would argue that the Inline Script Block comes close to having that purpose on its own!

because we are testing for an event that is equal to undefined, not unequal. But anyway, thanks for providing this solution. This is much more efficient compared to the quick fix.

aybe this usecase and the solution approach provided by @rlkoshak qualifies for the documentation on “inline scripts”.

What documentation would you propose here? Just go ahead and bring up some ideas and I’ll may put something there.

These things happen when you are providing solutions to wannabe programmers…